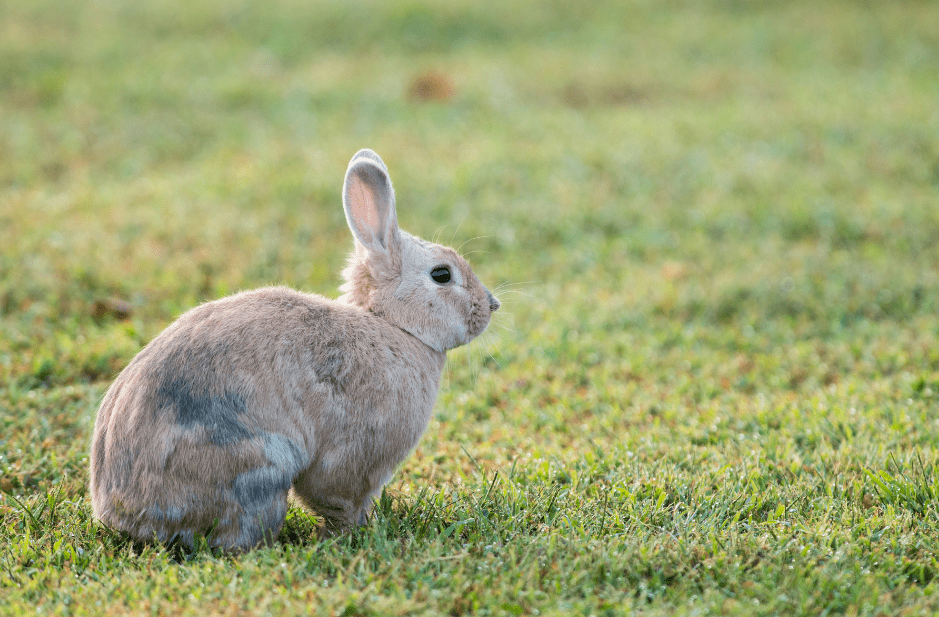 The Palomino rabbit is a medium to large breed that has a wonderful golden colored coat. While these rabbits are not very well-known and have to fight for their popularity, they have a fantastic temperament and can make a great pet to many, even first-time owners.

Although these bunnies can be hard to find, there’s a lot to learn about them and their history. Keep reading below to find out more about the Palomino breed of rabbit and see whether they might be the right bun for you.

History Of The Palomino Rabbit

The Palomino rabbit isn’t as well known as many other rabbits that are similar in size and shape to them. The American Sable, the Crème d’Argent and the American Chinchilla, all of which are alike, are supported by an organization called the American Livestock Breeds Conservancy (ALBC), which strives to promote and protect endangered livestock breeds. Unfortunately, the Palomino isn’t supported by the ALBC and it is for this reason that they may not be as well known.

However, the Palomino was recognized by the American Rabbit Breeders Association (ARBA) in 1957. Let’s take a look at this breed’s origins.

The creation of the Palomino rabbit is down to Mark Youngs of the Lone Pine Rabbitry in Washington state. He wanted to create a new rabbit breed and crossed several commercial-typed rabbits in the late 1940s, creating a breed he called “Tawnies”.

With the help of some other breeders, he created the Tawnies into a uniquely colored breed and obtained a working standard under the breed name “Washingtonian” from the ARBA. The Washingtonian was presented at an ARBA convention in 1953 and the name was changed to Palomino, before it was recognised as a breed in 1957. 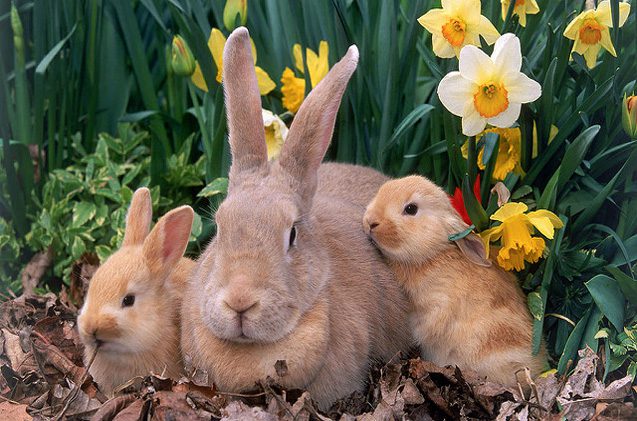 Characteristics Of The Palomino rabbit

The Palomino rabbit breed is best known for it’s appearance, particularly it’s coat color, although it is not a widely known bunny. Often, these rabbits are used for meat or as show rabbits instead of household pets.

The Palomino rabbit weighs between 8 to 10 lbs when fully grown with does being heavier than bucks. They have a commercial body type and are medium in length with well rounded hindquarters. Their eyes are brown in color and their ears are long and erect.

This rabbit has coarse fur that is short to medium in length. It is rollback fur, which means that when the fur is stroked from the opposite direction, it returns to its original position. Fortunately, they do not require too much grooming. We will go into more detail about grooming your Palomino rabbit later on.

The Palomino has a fantastic temperament. Docile and friendly, they are very calm and will happily go with he flow of what is happening in the house. They are sociable rabbits and love to be around their people, too.

However, because they are so sociable, the Palomino needs lots of time spent with their owners outside of their hutch. They will need to be able to explore, whether this is inside or outside, and will love to play games and bond with you. If they are confined to their hutch for too long or do not get enough interaction, they can become depressed.

You should always respect your Palomino’s personal space, especially when they are new to your home. If they are afraid or frightened, then they might try to bite.

The Palomino rabbit has an average lifespan of between 5 to 8 years, although they can live longer when cared for properly.

The Palomino rabbit is prone to many of the same health problems other rabbits are prone to. We have laid out the main concerns below.

– GI Stasis — this is a potentially deadly condition in which the digestive system slows down or stops completely. Symptoms include loss of appetite, small or no fecal pellets and lethargy. It can be treated if caught quickly.

– Ear Mites — this is a common parasite of pet rabbits. You may see your rabbit shaking their head a lot if they are affected. Your vet will be able to treat them.

– Malocclusion — this is when the upper and lower teeth are misaligned so that the normal process of chewing doesn’t wear down your rabbit’s teeth. Regular dental checkups are very important. You should also make sure your rabbit eats plenty of hay.

Fortunately, thanks to their short coat, they are not prone to woolblock. However, like all rabbits, they can also suffer from back issues if they are mishandled or accidentally dropped.

Regular vet checkups will ensure that you catch any health problems before they become too serious. You should also make sure that you are buying from a reputable breeder. 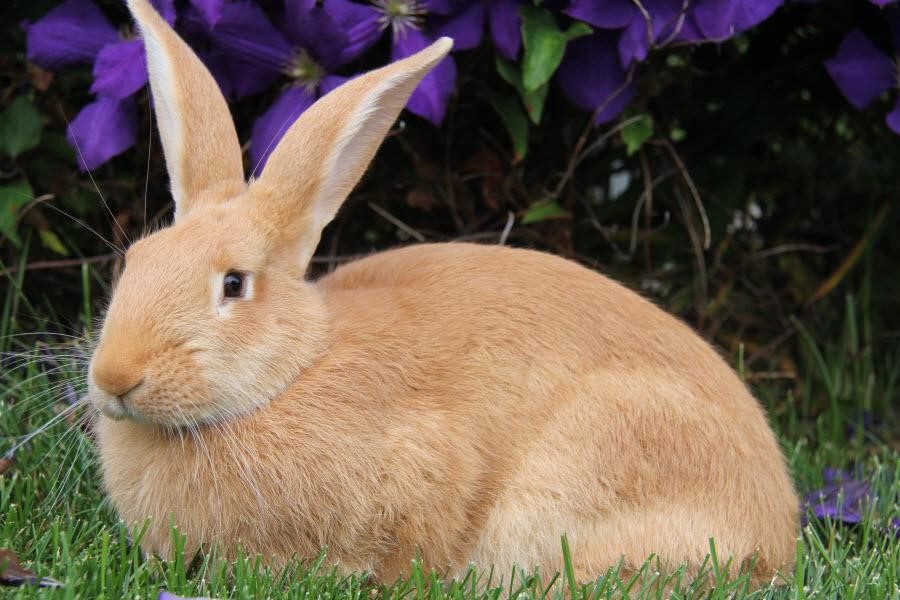 Now we know all about the traits and characteristics of the Palomino rabbit, it is time to take a look at what living with one of these rabbits on a day to day basis is really like. Below we will cover their food and diet, their exercise needs, their grooming requirements and their living space requirements.

The exact amount you feed your Palomino should be based on their size, age and activity level. They should be eating a portion of hay that is at least as their body size every day, alongside pellets and fresh vegetables. Fresh water should also always be available to them.

Hay is very important as it helps to keep your Palomino’s digestive system moving, as well as helping to wear down their teeth so they are less prone to dental issues. At least 70% of your rabbit’s diet should be hay.

Best Food For The Palomino Rabbit 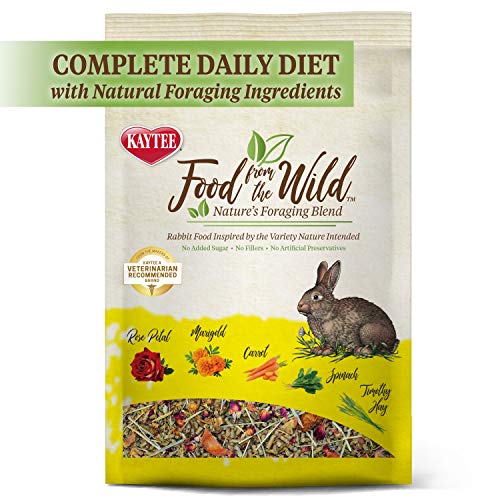 We recommend the Food from the Wild from Kaytee for your Palomino rabbit. This is a diet that is inspired by your rabbit’s ancestral feeding habits. Containing rose petal, marigold, carrot, spinach and timothy hay, this food is formulated only with ingredients that your bun would find in the wild, making it 100% natural and healthy. There is no added sugar, fillers or preservatives in this food and the pelleted pieces offer comprehensive nutrition and contain natural probiotics to support digestive health.

In the wild, rabbits run around three miles a day. Therefore, it is very important that you give your pet rabbit enough exercise every day to keep them active and entertained. They should have at least three hours of free-range time, whether this is out of their hutch in the garden or just around the house.

If you have the space, you can purchase an outdoor secure enclosure for your Palomino to run around in. This will give them lots of room to run around in, but means you won’t need to be supervising them while they exercise. It can also be attached to their hutch so they have extra space to hop aorund!

It is worth noting that if the Palomino does not spend enough time outside of their hutch and exercising, they are prone to becoming bored and depressed. This can lessen their life expectancy, so make sure you give them lots of time to be active!

A sociable rabbit, the Palomino will thrive in any house. They do well with individuals, couples, families and the elderly, as well as children. If the Palomino doesn’t spend enough time with their people and outside of their hutch they can develop behavioral issues, so make sure you have a few hours a day to bond with your bunny before you bring them into your home.

While rabbits are harder to train that cats or dogs, it can be done! You can teach your Palomino to use a litter tray so there is less mess to clean up. You can also try to teach them to come when their name is called!

The Palomino can live happily indoors or outdoors. They are a sociable rabbit and will like to be with the family, so will enjoy being inside with their owners. However, they also like to explore and need lots of space, so outside may be better for them. These bunnies have a dense and coarse coat and so will do well even in the coldest of weather (even snow!) as long as they are protected by the elements.

Whether they are inside or outside, their hutch should be large enough that they can easily hop around inside. Try to stay away from hutches with wire floors as these can cause sore hocks within rabbits. Take a look at the hutch we recommend below.

Best Hutch For The Palomino Rabbit 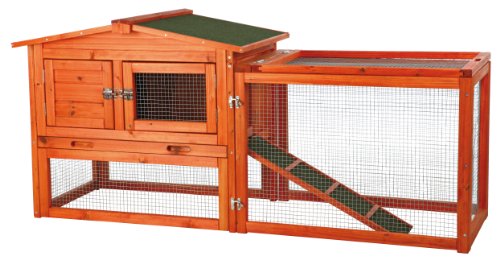 We recommend the Trixie rabbit hutch for the Palomino rabbit. A large hutch with an outdoor run, this multi-level hutch gives your rabbit space to roam and an enclosed upper level through a ramp for sleeping and hiding. There are three doors on the front — one for access for your rabbit and two for ease of cleaning — as well as access from above through the roof panels and run top.

This hutch is durably made with wood and metal. The roof has waterproof panelling to keep your Palomino dry, too. There is a removable bottom pan for the enclosed area, again to make cleaning simple, and the entire hutch is lockable to keep your bunny secure.

The Palomino rabbit does not need to be brushed very often and, during non-shedding periods, will only need a bi-weekly brush. During shedding season this will need to be increased slightly, but you shouldn’t find your Palomino sheds too much.

You should very rarely bathe your rabbit. It is not really necessary, unless they are really dirty. Bathing can also be a traumatic experience for them. You should also trim their nails as and when is needed. 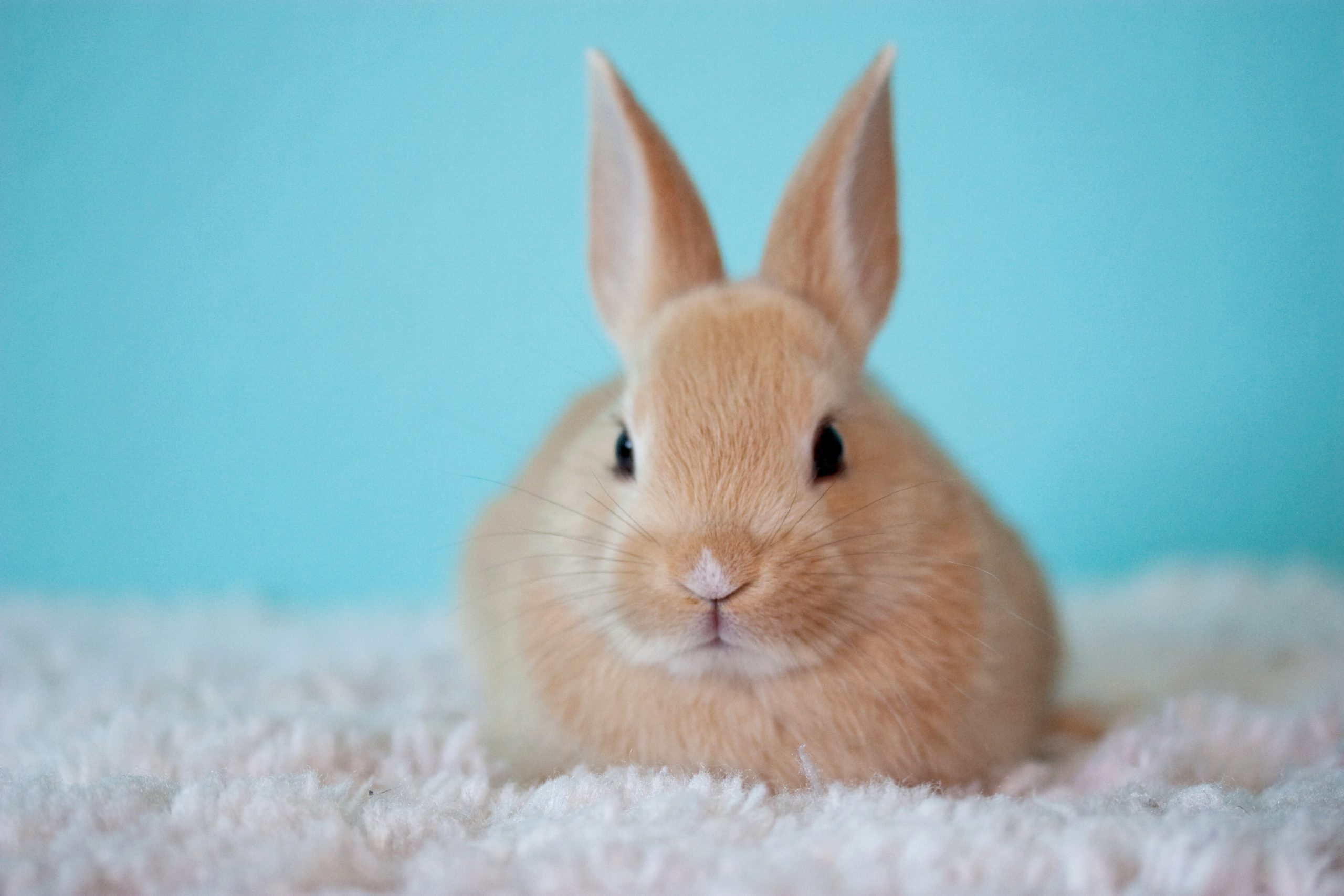 Can I keep my Palomino rabbit outside?

Yes! The Palomino rabbit can survive most weather thanks to their coat, and so will happily live outside even when it’s snowing! You must make sure they are protected from the elements though (sun, rain and snow) and bring them inside for lots of socializing with the family so they don’t become bored.

How big should my rabbit’s cage be?

The rule with rabbits is: the bigger the better! If you have the space for a big hutch then your rabbit will always appreciate the extra room to roam and exercise. No one wants to be stuck in a cramped space!

If you do not have a lot of space, then the cage should be at least 4 times the size of the rabbit. A guide is 24″ by 36″ for smaller rabbits (less than 8 lbs) or 30″ by 36″ for larger rabbits. Hutches with multiple stories are also popular as they give your bun more space.

What foods are harmful to rabbits?

There are a number of foods that are harmful to rabbits. While they can eat a lot of human foods, these are plant-based foods such as fruits and vegetables and many human foods a rabbit cannot digest. These include meat, peanut butter, chocolate, bread, onions, almonds, apple seeds, chips and any artificial colors, flavors or preservatives.

The Palomino rabbit is not as well-known as many rabbit breeds, but this doesn’t mean they don’t make wonderful companions! These friendly and good-natured bunnies are an excellent pet for a range of different households, families with children included, and are easy to take care of. They love to socialize and spend time with their owners, but will also happily live outside no matter the weather! Make sure you socialize these bunnies properly and give them lots of attention, and the Palomino will be your best friend.