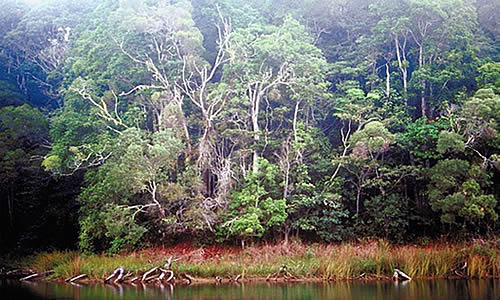 Rainforests are very dense, warm wet forests that are haven to millions of all kinds of animals. The plants in a rainforest provide much of the earths oxygen and therefore play an important part in the ecology of the earth. Rainforests once covered 14% of the earths surface and even though the Rainforests now only cover 6% of the earth, they are home to almost half of the worlds population of mammals, amphibians, reptiles, insects, bird life and plant life.

Tropical rain forests are called the ‘jewels of the earth’, and the ‘worlds largest pharmacy’ because of the large number of natural medicines discovered there.

The Amazon Rainforest has also been described as the ‘Lungs of our Planet’ because it provides the essential environmental world service of continuously recycling carbon dioxide into oxygen. More than 20 percent of the world oxygen is produced in the Amazon Rainforest.

The worlds rainforests (tropical rainforests and temperate rainforests) can be found in Africa, Asia, Oceania (the islands around Australia), Europe and South and Central America.

The rainforests have only two seasons: the wet season and the dry season.

Tropical rainforests are located in a band around the equator (Zero degrees latitude) in the area between the Tropic of Cancer (23.5° North latitude) and the Tropic of Capricorn (23.5° South latitude).This 3,000 mile (4800 kilometres) wide band is known as the ‘tropics’.

The equator is a line that circles the centre of our global world and is situated halfway between the north and south poles. Temperatures at the equator are high. These high temperatures cause accelerated evaporation of water, which results in frequent rain in rainforests in the tropics. 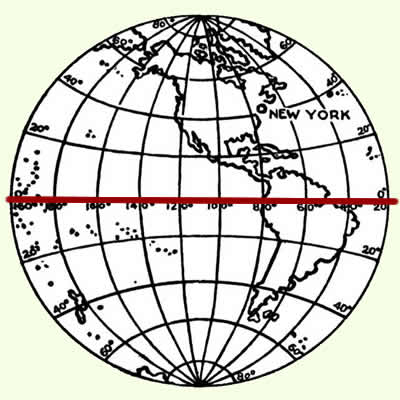 Below is a map which shows (in green) where the main tropical rainforests are located: 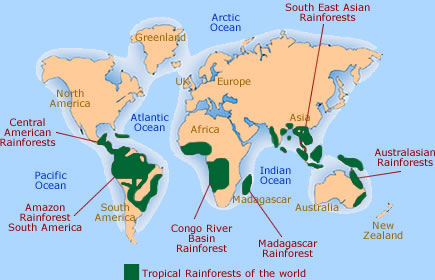 The largest rainforests are in the Amazon River Basin (South America), the Congo River Basin (western Africa) and throughout much of southeast Asia. Smaller rainforests are located in Central America, Madagascar, Australia and nearby islands, India and other locations in the tropics.

African Rainforests – Central Africa holds the worlds second largest rainforest which is located on the Congo River, the seventh longest river at 4,630 kilometres. To the south east, the large island of Madagascar was once intensively forested, but now much of it is disappeared. Africa contains areas of high cloud forest, mangrove swamps and flooded forests. The island of Madagascar is home to many endemic plants and animals not found anywhere else in the world.

Asian Rainforests – The Asian Rainforests stretch from India and Burma in the west to Malaysia and the islands of Java and Borneo in the east. Bangladesh has the largest area of mangrove forests in the world. In Southeast Asia the climate is hot and humid all year round. Mainland Asia has a subtropical climate with torrential monsoon rains followed by a dry period.

Australasian Rainforests – Millions of years ago, Australia, New Zealand and the island of New Guinea formed part of a great forested southern continent, isolated from the rest of the world. Today these countries contain many different species of animal that are endemic to these parts only. Undergrowth in Australias tropical forests is dense and lush. The forests lie in the path of wet winds blowing in from the Pacific. 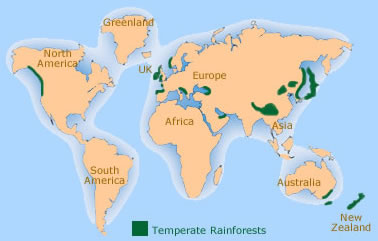