San Cristobal (Chatham) is the easternmost island in the Galapagos archipelago, and one of the oldest geologically. It bears the name of the Patron Saint of seafarers, ‘St. Christopher’. Its English name was given after William Pitt, 1st Earl of Chatham. It has an area of 558 square kilometres (215 square miles) and its highest point rises to 730 metres (2,395 feet).

Its vegetation includes Calandrinia galapagos, Lecocarpus darwinii and trees such as Lignum vitae and Matazarna.

The largest fresh water lake in the archipelago, Laguna El Junco, is located in the highlands of San Cristobal in the southern half of the island. The lake harbours a large population of birdlife, but reaching the lake requires a short uphill walk. Nearby, La Galapaguera is a breeding station and sanctuary for giant tortoises. 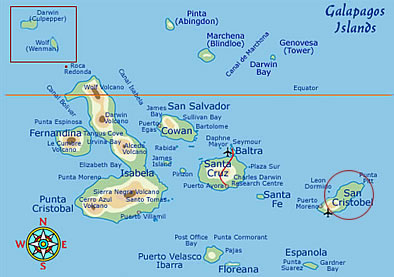 The capital of the province of Galapagos, Puerto Baquerizo Moreno, lies at the southern tip of the island.

The town of Puerto Baquerizo Moreno includes the Cerro Tijeretas, a nesting colony for Frigate birds and a statue of Charles Darwin, marking the original site where he first disembarked in the Galapagos Islands during the voyage of the ‘Beagle’. La Loberia, a colony of sea lions, lies about ten minutes by bus from the town.