Santa Cruz Island is situated in the centre of the archipelago with an area of 986 kilometres squared and a maximum altitude of 864 metres. It is a large island with a variety of geology, wildlife and vegetation, all of the Galapagos life zones are present on Santa Cruz. Santa Cruz Canton is the second largest island after Isabela. Its capital is Puerto Ayora, the most populated urban centre in the Galapagos Islands.

On Santa Cruz there are some small villages, whose inhabitants work in agriculture and cattle raising. This island is a large dormant volcano. It is estimated that there were eruptions around a million and a half years ago.

As a testimony to its volcanic history there are two big holes formed by the collapse of a magma chamber, Media Luna and Los Gemelos.

Named after the Holy Cross, its English name (Indefatigable) was given after a British vessel (HMS Indefatigable). Santa Cruz hosts the largest human population in the archipelago at the town of Puerto Ayora. 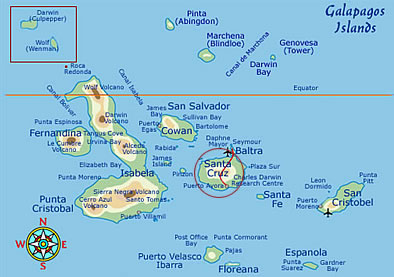 The Charles Darwin Research Station and the headquarters of the Galápagos National Park Service are located here. The GNPS and CDRS jointly operate a tortoise breeding centre where these chelonians are prepared to be reintroduced to their natural habitat.

The Highlands of Santa Cruz offer an exuberant vegetation and are famous for the lava tunnels. Large populations of Giant Tortoises are found here. Wild Tortoises roam free crashing through the mist covered guayabillo, pega pega, and grasses of the humid zone.

Flycatchers, Finches and Owls fill the Scalesia Forests near Los Gremlos. Almost every bird found in the archipelago has been seen within the many life zones on Santa Cruz.

Black Turtle Cove is a site surrounded by mangroves which sea turtles, rays and small sharks sometimes use as a mating area. Cerro Dragon, known for its flamingo lagoon, is also located here and along the trail one may see Galapagos Land Iguanas foraging.