Santiago Island is also known as San Salvador, after the first island discovered by Columbus in the Caribbean Sea or as James Island. Its name is equivalent to Saint James in English. The island, which consists of two overlapping volcanoes, has an area of 585 square kilometres (226 square miles) and a maximum altitude of 907 metres (2976 feet), at the top of the northwestern shield volcano.

The volcano in the islands southwest erupted along a linear fissure and is much lower. The oldest lava flows on the island date back to 750,000 years ago.

Marine Iguanas, sea lions, fur seals, land and sea turtles, flamingos, dolphins and sharks are found on and around this island. There are a large number of pigs and goats, which were introduced by humans to the islands and have caused great harm to the endemic species. These have been eradicated (pigs in 2002 and goat eradication is nearing finalization).

Darwin Finches and Galápagos Hawks are usually seen as well as a colony of Fur Seals. At Sullivan Bay a recent (1897) pahoehoe lava flow can be observed. 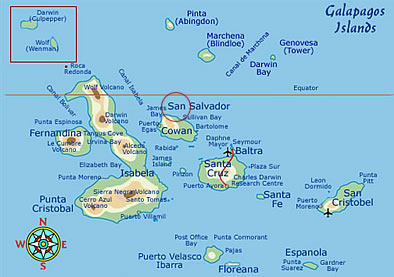 Puerto Egas, south of James Bay and west side of Santiago is one of the best sites. There is a long, lava shoreline where eroded rock formations house an excellent variety of wildlife. Marine iguanas bask in the sun while land iguanas scater around feeding on exposed algae. The tide pools contain many Sally Lightfoot crabs, which attract other types of hunters.

Sullivan Bay is especially fascinating for those who are interested in geology and volcanology. You can walk over the uneroded, black lava flow covered with lava bubbles and tree-trunk molds in the surface. There are two small beaches where turtles come for nesting.