Seahorses are reknown for their mating rituals in which they dance together before mating. View the short video below to see these graceful creatures perform their mating dance.

The mating pair entwine their tails and the female aligns a long tube called an ovipositor with the males pouch. The eggs move through the tube into the males pouch where he then fertilizes them. The embryos develop in ten days to six weeks, depending on species and water conditions. When the male gives birth he pumps his tail until the baby seahorses emerge. 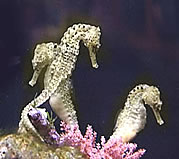 The males pouch regulates salinity (dissolved salt content of a body of water) for the eggs, slowly increasing in the pouch to match the water outside as the eggs mature. Once the offspring hatch, the male releases the fry (baby seahorses) and does not provide parental care for them. Most will not consume their own offspring, however, it has been known for them to do so.

Once released, the offspring are independent of their parents. Some spend time among the ocean plankton developing before settling down.

At times, the male seahorse may try to consume some of the previously released offspring. Other species such as the Dwarf Seahorse (Hippocampus zosterae) hatch immediately and begin life in the benthos (organisms and habitats of the sea floor) .

Seahorses are generally monogamous, though several species such as the Big-Bellied Seahorse (Hippocampus abdominalis) are highly gregarious. In monogamous pairs, the male and female will greet one another with courtship displays in the morning and sometimes in the evening to reinforce their pair bond. Seahorses spend the rest of the day separate from each other hunting for food.