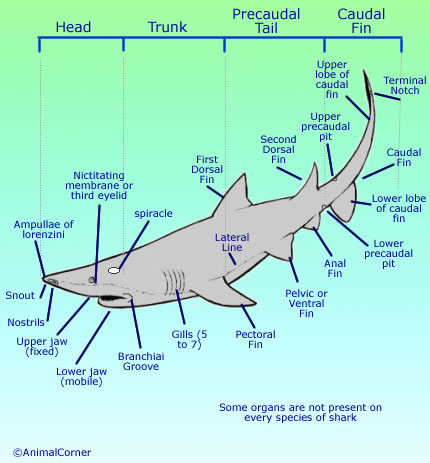 The sharks fins are used for stabilizing, steering, lift and propulsion (thrust). Each of the fins are used in a different manner. There are one or two fins present along the dorsal midline called the first and second dorsal fin. These are anti-roll stabilizing fins. These two fins may, or may not have spines at their origin. When spines are present they are defensive and may also have skin glands associated with them that produce an irritating substance.

The sharks spiracle is a vestigial first gill slit, which is located behind the eye and is used to provide oxygenated blood directly to the eye and brain through a separate blood vessel. It is absent in some species of shark, particularly fast swimming sharks.

All sharks have gill slits which are located at the side of their heads. Gas exchange occurs at the gills and oxygenated water must always be flowing over the gill filaments for respiration to occur. Water enters through the mouth of the animal, into the pharynx, over the gills and exits through the gill slits. Respiratory gas exchange takes place on the surface of the gill filaments as the water passes over and out the gills.

Shark teeth are not lodged permanently within the jaw, but are attached to a membrane known as a tooth bed. The tooth bed membrane is similar to a conveyor belt, moving the rows of teeth forward as the shark grows, and replacing the older teeth in front that have become damaged, fallen out or worn down.

It is not uncommon for shark teeth to be found lodged in large prey (such as whale carcasses) or lying loose on the seabed.

The number, shape and appearance of teeth in sharks varies from species to species. Sharks teeth are a good way of identifying which type of shark it is. The one above is a Great White Shark.

A shark relies completely on its sensory organs in all aspects of its life. One of the reasons sharks are extremely good predators is their amazing sensory ability. Their senses are remarkable like no other fish or mammal. Sharks rely on their complex sensory system in all aspects of their life, hunting, feeding, mating and general existence.

Sharks also have an acute sense of hearing and can hear prey many miles away. A small opening on each side of their heads (not to be confused with the spiracle) leads directly into the inner ear through a thin channel. The lateral line shows a similar arrangement, as it is open to the environment via a series of openings called lateral line pores. In bony fishes and tetrapods the external opening into the inner ear has been lost.

Sharks have a keen sense of smell, with some species able to detect as little as one part per million of blood in seawater. They are attracted to the chemicals found in the guts of many species, and as a result often linger near or in sewage outlets. Some species, such as Nurse Sharks, have external barbels that greatly increase their ability to sense prey. The short duct between the front and back nasal openings are not fused together as in bony fishes.

Sharks generally rely on their superior sense of smell to hunt prey, but at closer range they also use the lateral lines running along their sides to sense movement in the water, and also use special sensory pores on their heads (Ampullae of Lorenzini) to detect electrical fields created by prey.

As in most fish, sharks also have a Lateral Line. This system is used to detect movement and vibration in the surrounding water. Lateral lines are usually visible as faint lines running lengthwise down each side, from the vicinity of the gill covers to the base of the tail. The receptors in the line, known as ‘neuromasts’, each consist of a group of hair cells, whose hairs are surrounded by a protruding jelly-like cupula, typically 1/10 to 1/5 millimetres long. The neuromasts are usually at the bottom of a pit or groove, which is large enough to be visible.

The development of the lateral-line system depends on the sharks mode of life. For instance, active swimming types tend to have more neuromasts in canals than on the surface, and the line will be further away from pectoral fins, presumably to reduce the ‘noise’ generated by fin motion.

Sharks eyes have a few modifications to their basic structure also found on other vertebrates. The shark eye has a reflecting layer called a tapetum lucidum located behind the retina. The structure consists of a layer of parallel, saucer-like cells containing silver guanine crystals.

The crystals reflect light that has already passed through the retina and redirects it back to restimulate the retina as it passes out through the eye. This effectively improves the visual signal, particularly at low light levels giving sharks increased visual capabilities. Another modification found in some sharks is the presence of a nictitating membrane. This structure is a denticle covered membrane that protects the eye. It closes when the shark passes close to objects and also during biting or feeding.

The ‘Ampullae of Lorenzini’ are small vesicles and pores that appear around the head of the shark and are visible to the naked eye. They are used to detect weak magnetic fields produced by other fishes, at least over short ranges. This enables the shark to locate prey that are buried in the sand or nearby movement.