A sharks behaviour is completely linked to their amazing array of senses. These senses influence every part of their lives. Low frequency sounds can travel great distances under the water and the sharks complex hearing system allows them to be the first to detect an interesting target.

Depending on species, sharks can be either solitary, gliding through the water in search of food, or gregarious in the form of schools containing over 100 individuals. The Scalloped Hammerheads are a prime example of one species of shark that congregate in large numbers. However, even solitary sharks occasionally meet for mating or on hunting grounds which may lead them to cover thousands of miles a year. 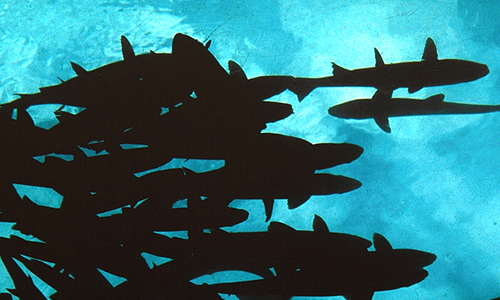 Despite the common myth that sharks are instinct-driven eating machines, recent studies have indicated that many species possess powerful problem-solving skills, social complexity and curiosity. The brain-mass-to-body-mass ratios of sharks are similar to those of mammals and other higher vertebrate species.

Sharks have a tendency to work together as a team. A few years ago, a group of seven sharks were observed near Smitswinkel Bay in South Africa working to relocate a partially beached dead whale into deeper waters so that they all could feed upon it.

Groups of sharks, roughly the same age and gender, tend to return to the same area each year. Sharks have been observed returning to a particular place and patrol the same bays every year at the same time. Each year, they bask and communicate with each other with body movements and are present at each others kills. A particular species renown for this behaviour is the Grey Reef Shark.

Sharks have even been known to engage in playful activities Porbeagle sharks have been observed repeatedly rolling over and over again in kelp and then being chased by another with a piece of kelp trailing behind them.

Sharks need to keep moving in order to breathe, however some shark species have been observed resting on the sea bed actively pumping water over their gills. Sharks tend to have active and inactive periods rather than sleep.

A Nurse shark is able to rest motionless while other sharks have to keep moving to survive. Sharks eyes do not close while they are inactive. They have been observed inactive as though they were asleep, but their eyes have been actively following divers swimming nearby. It is also known that sharks can continue swimming while apparently being ‘asleep’ such as in the case of the Dogfish.

The spinal cord of the Dogfish coordinates its swimming instead of its brain allowing it to swim whilst ‘asleep’.

Contrary to popular belief, only a few sharks are dangerous to humans. Out of more than 360 species, only 5 have been involved in a significant amount of fatal unprovoked attacks on humans: the Great White Shark, Tiger Shark, Oceanic Whitetip Shark, Hammerheads and Bull Sharks. These sharks, being large, powerful predators may sometimes attack and kill people, but all of the above sharks, even the Great White, have been filmed in open water, with no cage, time and time again, without any attacking incidents occurring.

The Oceanic Whitetip Shark is not often involved in unprovoked attacks. This is mainly because it lives in the open sea and not near coasts. However, in the past, it has been involved in the aftermath of several air and sea incidents. 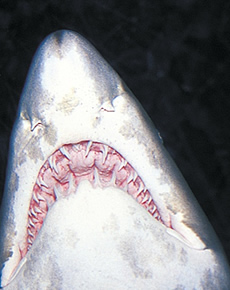 When some sharks (like the Great White or the Grey Reef shark) turn aggressive prior to an attack, they arch their back and throw back their head.

This places their mouth in a better position for taking a big bite. They also move their tail more acutely (probably in preparation for a chase).

On average, there are only about 100 shark attacks each year and only 10 of those result in a human death.

However, people kill thousands of sharks every year for sport and for food. Shark skins are used to make products like any other leather would be. Up until the 1950’s, shark livers were used as a vitamin A supplement.

There are many reasons why sharks do sometimes attack humans. One of the more obvious reasons may be that from beneath the ocean surface, a human could be mistaken for shark prey such as a seal. This would be a typical theory in regards to attacks on surfers. When lying on their boards their shape does resemble a seal from beneath the surface.

Sharks have sensory organs on their noses that detect movement. A shark will also only bite a human once and then retreat from its target. This may be because humans do not taste nice or because we do not have the necessary fat such as a seals blubber. Why sharks retreat after the first bite is not clear. One theory could be that the shark waits for the injured target to exhaust himself or die before returning to feed on the remains or, as above, we are not popular on the ‘sharks menu’.

Another theory is that the electrical receptors, which pick up movement, do not pick up the same signals from a wounded human as they would a wounded seal, and so they are more cautious. In fact, it has recently been shown that surfers do not give off the same electrical signals as seals, or it is thought there would be far more attacks.