Sheep follow a similar reproductive strategy to other herd animals. A flock of ewes is generally mated by a single ram, who has either been chosen by a farmer or has established dominance through physical contest with other rams (in feral populations). Most sheep are seasonal breeders, although some are able to breed year round.

Ewes generally reach sexual maturity at six to eight months of age and rams generally at four to six months. Ewes have estrus cycles about every 17 days, during which they emit a scent and indicate readiness through physical displays towards rams.

Without human intervention, rams fight during the rut to determine which individuals may mate with ewes. Rams, especially unfamiliar ones, will also fight outside the breeding period to establish dominance. Rams can kill one another if allowed to mix freely. During the rut, even normally friendly rams may become aggressive towards humans due to increases in their hormone levels.

Ewes reach sexual maturity at about 6 months old but they are not allowed breed until they are about one and a half years old.

Most lambs are born in Spring. Ewes usually give birth to either one or two lambs at a time. The ewe carries the lambs for about 5 months before they are born. Normal labour may take one to three hours. Lambs typically weigh around 9 pounds when they are born.

Following the birth, it is usual for the ewe and lamb to be placed in a small pen for a few days away from the flock. This gives them time to bond. The lamb learns the sound and smell of its mother and the ewe does the same with the lamb. After a few days, they rejoin their flock. Once they have bonded, a mother sheep will not usually allow any other lamb but her own suckle on her milk.

Sometimes, ewes might die after giving birth or may be unwilling to take care of their newborn. Therefore, the shepherd that is responsible for the flock, has to find other ewes to ‘adopt’ the newborn lambs and accept it has their own.

Sometimes, goats are kept as a substitute milk supplier for abandoned lambs as their milk is similar to that of a sheep. Sheep milk has more fat and protein than cows milk, and the lambs can get very sick if they are fed cows milk at this age. If lambs are bottle fed, they have to be given a special formula milk. 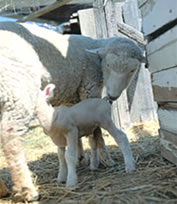 The lamb will suckle on its mothers milk for about 4 months then they begin to eat grass, hay and grain. A ewe has a unique bleating sound in which the lamb can identify her with.

The lambs will stay with their mother until they are about 5 months old. At 6 months, they are considered fully grown.

However, they are still called lambs if they are less than one year old.