South Plaza island is a small island off the east coast of Santa Cruz in the Galapagos Islands. It has an area of 0.13 square kilometres (0.05 square miles) and a maximum altitude of 23 metres (75 feet). The South Plaza island was formed by lava up streaming from the bottom of the ocean. Despite its small size it is home to a large number of species and it is famous for its extraordinary flora. That is why this island is very popular with visitors.

On the steep banks it is possible to see a great number of birds such as nesting Red-billed Tropicbirds and Swallow-tailed Gulls, but most of all, enjoying the beautiful view from the top of the steep banks or strolling along the base of the cliff is an extremely pleasurable experience.

Very attractive are the beautiful prickly pear cactus trees and of course the large colony of Galapagos Land Iguanas. The flora of South Plaza includes Opuntia cactua and Sesuvium plants, which forms a reddish carpet on top of the lava formations. 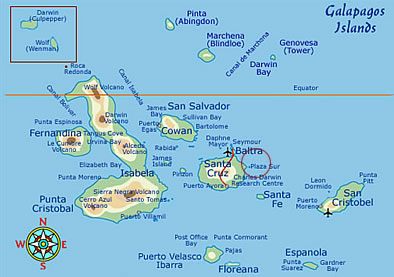 Depending on the season, the Sesuvium ground vegetation changes its color from intense green in the rainy season to orange and purple in the dry season.