Fossils are the preserved remains of plants or animals. For such remains to be considered fossils, scientists have decided they have to be over 10,000 years old.

When asked what a fossil is, most people think of petrified bones or petrified wood. Permineralization is a process. For bone to be permineralized, the body must first be quickly buried. Second, ground water fills up all the empty spaces in body, even the cells get filled with water. Third, the water slowly dissolves the organic material and leaves minerals behind. By the time permineralization is done, what was once bone is now a rock in the shape of a bone. Unlike what you see in cartoons, dogs wouldn’t be interested in these bones.

When an animal or plant dies, it may fall into mud or soft sand and make an impression or mark in the dirt. The body is then covered by another layer of mud or sand. Over time, the body falls apart and is dissolved. The mud or sand can harden into rock preserving the impression of the body, leaving an animal or plant shaped hole in the rock. This hole is called a mold fossil. If the mold becomes filled over time with other minerals the rock is called a cast fossil.

A simple experiment can show you how this works. Take some clay and press a seashell or some other object into the clay. Pull the sea shell out of the clay any you will see a detailed impression of your seashell in the clay. If, over time, the clay hardens into rock the result would be a fossil mold. But really, who has millions of years to wait to make their own fossil?

Here’s the quick way. Pour plaster of Paris, dental stone, or other plaster into the mold. Wait for it to harden and you have just made your own cast fossil.

Another type of fossil is a resin fossil. Resin is sometimes called amber. Plants, mostly trees, secrete sticky stuff called resin. Sometimes insects, other small animals, or bits of plants get stuck in the sticky resin. The resin hardens overtime and is preserved in rock making a fossil.

There are many other types of fossils. Compression fossils form when leaves become trapped between layers of sediment (mud, fine sand, or volcanic ash) and get smashed flat. Over time the sediment hardens into rock and the leaves become fossils. This usually happens with leaves because they are already flat.

Anyone can find fossils. I have been finding fossils for nearly as long as I can remember, and finding fossils is still one of my favorite things to do. I found many fossils as a small child near my grandmother’s house in Huntington, Utah. Huntington, Utah, is near the famous Cleveland Lloyd Dinosaur Quarry and is surrounded by the Morrison Rock Formation. The Morrison Rock Formation is famous worldwide for having dinosaur fossils in it. Near the home where I grew up I could find Trilobites and the trace fossils made by ancient worms as they burrowed through soft mud at the bottom of an ancient sea.

If you want to find fossils you will need to find the right kind of sedimentary rocks. While digging on the beach in England in 2010, 5-year-old Emily Baldry discovered the fossil of a 160 million year old sea creature. Sedimentary rocks typically do not live in your backyard, so please don’t go digging, unless you have your parents’ permission. When you are outside where the rocks “live,” keep your eyes open, you just might find a fossil.

Even if you don’t find a fossil, rocks are just plain cool.

How Old Are Fossils? 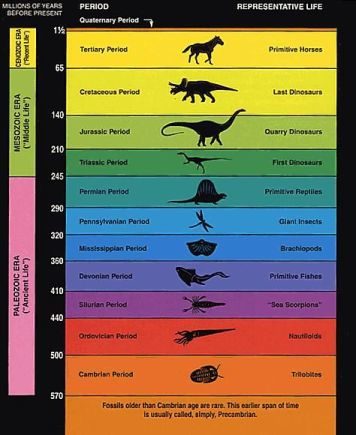 So, if you can’t date the fossil directly with scientific tests, how do you date the fossil? You have to use what scientists call relative dating. The relative dating method most commonly used by paleontologists and geologists is called stratigraphy. Stratigraphic dating works like this. Rocks are formed in horizontal (flat, not up and down) beds or layers. These layers are called strata. The oldest layers are on the bottom and the youngest layers are on the top. So, the oldest fossils are on the bottom layer and the newest fossils are on the top layers. If you find a layer of the right kind of igneous rocks you can use the exact dating method to determine and exact date of that layer.

Geologists and paleontologists have used a combination of dating techniques, which are radiometric dating, stratigraphic dating, and index fossils, to determine the approximate age of rocks all over the world.