You are here: Home / Diet / What eats Algae? 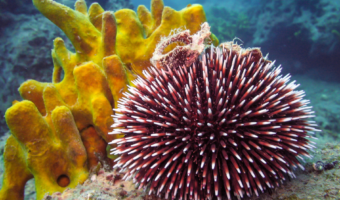 Algae is a green substance that can be found in bodies of water all over the world. It is an important part of the ecosystem, but it can also be a nuisance to humans.

Algae can grow very quickly and clog up waterways and pipes. But algae is also food for many different creatures!

Algae are tiny aquatic plants that can be found in fresh or saltwater environments. They are usually green, but they can also be blue, red, or brown. Algae are an important part of the food chain because they produce oxygen and provide food for many creatures. Some algae even produce energy that is used by humans!

The Importance of Algae

Algae play a very important role in the environment. They produce oxygen, which is necessary for all animals to breathe. Algae also help to purify water and provide food for many creatures. Without algae, our planet would not be able to support life!

Algae create oxygen through a process called photosynthesis. During photosynthesis, algae converts sunlight into energy. This energy is used to produce oxygen and glucose. Glucose is a type of sugar that algae use to store energy. Algae is a good source of vitamins and minerals.

There are many different creatures that eat algae. Some of these include:

Each of these creatures plays an important role in the ecosystem by eating algae. Without them, algae would grow out of control and choke off other plant life.

Spiny lobsters, also known as langustas, langouste, or rock lobsters, make up the family Palinuridae in the order Decapoda and infraorder Achelata. There are around 60 species of these achelate crustaceans which are split into 12 genera.

Spiny lobsters are found in almost all warm seas, including the Caribbean and the Mediterranean Sea, in coastal waters off Southeast Asia and Australia, and off the coast of South Africa.

These lobsters are characterized by their lack of front claws on the front of their bodies and their very thick and oversized antennae, which is where the word ‘spiny’ comes from.

They are nocturnal and feed on algae, snails, crabs, and other small creatures that dwell on the bottom of the ocean floor. They commit mass migration after rainstorms at their place of habitation.

A fish is a water-dwelling vertebrate with gills. Most are cold-blooded, though some, such as some species of tuna and shark, are warm-blooded. There are over 29,000 species of fish, making them the most diverse group of vertebrates. Taxonomically, fish are a paraphyletic group whose exact relationships are much debated.

Fish come in different sizes, from the 16 metres (52.49 feet) whale shark to a 8 millimetre (just over a quarter of an inch) long stout infant fish. Many types of aquatic animals named ‘fish’, such as jellyfish and cuttlefish, are not true fish.

Sea urchins are globular, spiny sea creatures that make up the class Echinoidea. There are around 950 species of sea urchin, and they inhabit the seabed of every ocean and every depth zone, from the tide line to 15,000 feet deep. The name urchin is an old word for hedgehog, which sea urchins resemble; they have archaically been called sea hedgehogs.

The scientific name of these marine invertebrates is Echinoidia, which is also the name of their class. They can range from 3 to 10 cm (1 to 4 in) in diameter and have hard shells (tests). These tests are covered in spikes, which they are most known for, and help to protect them from predators as they cannot swim. They can move slowly along the sea floor, using small, adhesive tube feet among their spines.

Sea urchins eat algae mostly, although will also eat slow moving animals. Their main predators are sea otters and starfish, as well as the wolf eel and triggerfish. Sea urchins are edible, although not all species are, and are caught and sold in some parts of the world. They can sting humans when touched, but these stings are mostly harmless although may trigger some allergic reactions.

Most species of sea urchin are not considered to be in danger or threatened. There are some species which are, however, and this is mostly due to commercial fishing and climate change.

Krill are small crustaceans of the order Euphausiacea, and are found in all the world’s oceans. They belong to the class Malacostraca, which contains some 40,000 species of crustaceans, and includes the superorder Eucarida comprising the three orders, Euphausiacea (krill), Decapoda (shrimp, prawns, lobsters, crabs), and the planktonic Amphionidacea.

There are two families within the order Euphausiacea — Euphausiids, which contains 10 different genera with a total of 85 species, and the Bentheuphausiidae, which has only one species, Bentheuphausia amblyops. This is a bathypelagic krill living in deep waters below 1,000 m (3,300 ft). It is considered the most primitive extant krill species.

It is one of the most abundant species in the entire food chain, with many animals feeding on it. A disruption to the world’s marine life resulting in loss of krill could have an enormous effect on entire ecosystems.

Krill are herbivorous or omnivorous in nature. They feed on small algae or microscopic animals such as phytoplankton and zooplankton that happen to pass by. A few species are exclusively carnivorous and supplement their diet with fish larvae.

Frogs are amphibians and in most parts of the UK, they start spawning in spring. During the mating season, the throat of the male frog turns a bluish color, they are generally light and greyish in color and the female turns browner or sometimes red. The adults congregate in the ponds, where the males compete for females. The courtship ritual involves croaking and a successful male grasps the female under the forelegs. The females, which are generally larger than the males, lay up to 4000 eggs which float in large clusters.

The clumps of jelly-like eggs are usually laid around March time. Tadpoles which emerge from the spawn generally take around 12 weeks to develop into tiny froglets. They need water to keep their skin moist so are normally found near water. In the wild, the Common frog has a lifespan of around 8 years.

Tadpoles are mostly herbivores, feeding on algae, detritus (bodies of dead organisms) and some plants. They will also eat other animals in small amounts.