The Giant Schnauzer is the largest of the three Schnauzer dog breeds – Giant, Standard, and Miniature. The Schnauzer name is derived from the German word “schnauze” which means muzzle. The Schnauzer’s muzzle is decorated with a moustache and beard. The Giant has a rough and wiry outer coat with a dense undercoat. This Schnauzer has longer hair on its legs and face and shorter hair elsewhere.

The most common Giants’ colors are: salt-and-pepper; with or without tan shading; pure black; or black and silver. Male Giant Schnauzers stand 26 to 28 inches tall and females stand 24 to 26 inches tall at shoulder height. Giants can weigh from 70 to 90 pounds. Giants can have an intimidating appearance due to their large size and serious expression. Giant Schnauzers are members of the American Kennel Club (AKC) Working Dog Group. 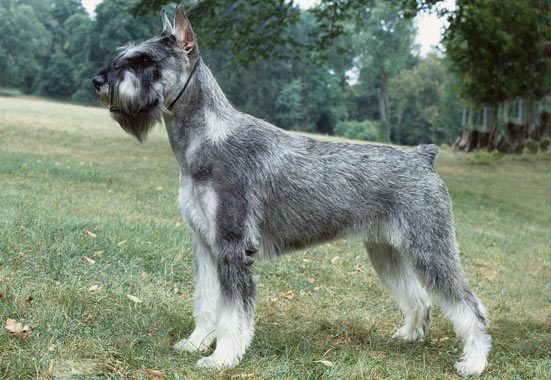 Giant Schnauzers were used to herd cattle in Wurttemberg and Bavaria in southern Germany. The early Schnauzers were popular as coach dogs because of their stamina. Later the Giant Schnauzers were used as guard dogs for butcher shops and breweries. In Germany the Giant became the dog of choice for police and military work. In the US and Canada, Giants are used for search and rescue work and also at airports for the detection of dangerous or illegal substances.
The Giant was ranked 78th out of 154 dog breeds in 2005 AKC registrations.

The Giant is a little quieter than the Standard but is still alert, energetic and bold. The Giant makes a good police and property guard dog but it also makes a good family pet. This breed is athletic and energetic and needs lots of walking and running every day. Owning a Giant takes a gigantic commitment to early and on-going socialization with children, other dogs and strangers.

Giants can be aggressive toward small pets, other dogs and overly protective of its family’s children when they are playing with others. Small children should be thoroughly supervised when playing around the Giant Schnauzer as the breed will try and dominate them. Giant Schnauzers do best with older family children and are not the best breed for families with young children or other pets.

This breed has the potential for assertive and aggressive behavior and the owner must be capable of controlling this powerful dog on its leash when it attempts to get into a fight with another aggressive dog. Giants require lots of time and attention and need lots of human interaction.

They are also working dogs and require lots of daily exercise. Giants make fantastic family pets if they are thoroughly socialized and trained when young. All members of the family should be involved in the early training and socialization so that the young Giant doesn’t try to raise itself in the family pack hierarchy and dominate certain family members. All members of the family should use the same consistent approach to dealing with the Giant so it knows that it is at the bottom of the family pack hierarchy. Caution should also be used when strangers come onto the Giant’s property or into its house.

The Giant must be thoroughly socialized to accept the visits of strangers when it is a puppy or else it must be locked in its crate to avoid being overly protective of its turf when strangers visit. Giant Schnauzers make excellent guard dogs and watch dogs. This breed is not suitable for first-time or novice dog owners.

Giant Schnauzers need a lot of outdoor exercise including long walks and runs. German-bred lines seem to focus more on performance sports and should be given lots of work.

Giants should be brushed once or twice a week and his moustache, beard and eyebrows should be combed daily to prevent tangles. Excessive hair growth between the foot pads and inside the ears should be clipped. Show dogs need to have the dead hair on their coats hand-stripped or plucked every few months while other owners may just use clippers on their pet. This Schnauzer should have its bottom clipped for cleanliness.

Giant Schnauzers have an expected lifespan of about 10 to 12 years. Prospective buyers should ask for the breeding parents Orthopedic Foundation for Animals test results for hip dysplasia. They should also ask about cancer, hypothyroidism, epilepsy and bloat in the breeders specific bloodlines.