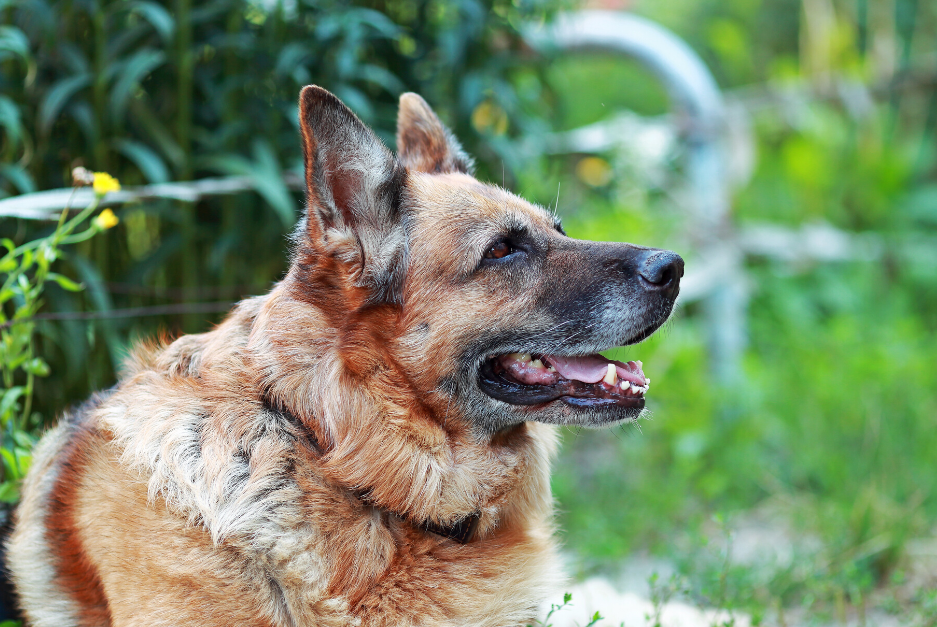 You’ve probably seen a King Shepherd dog whether you’re aware of it or not. These formidable dogs present a regal, somewhat imposing appearance that’s impossible to miss.

Many people simply assume they are very large German Shepherd dogs, and that’s no surprise, since the German Shepherd is very much a part of its ancestry. Both American and European German shepherds are used in breeding the King Shepherd.

History Of The King Shepherd

The King Shepherd was first bred in the United States the 1990’s. This stately, large breed is a cross between a German Shepherd and a Shiloh Shepherd. Dating further back, their ancestry is found in the herding dogs originally bred to create the German Shepherd. Alaskan Malamutes and Great Pyrenees are a few of the King Shepherd’s older ancestors.

The breed was created by David Turkheimer and Shelly Watts-Cross who wanted a shepherd dog crossbreed that was larger than the traditional GSD but with fewer major health problems.

As a fairly new crossbreed, The King Shepherd is not yet recognized by the American Kennel Club or any other kennel club, however it has gained much recognition through such organizations as the AKSC (American King Shepherd Club,) the ARBA (American Rare Breed Association,) the Dog Registry of America, Inc., the APRI (American Pet Registry, Inc.) and the ERBDC (Eastern Rare Breed Dog Club.)

The AKSC, the original breed club for King Shepherds started by David Turkheimer and Shelley Watts-Cross, continues to work on achieving recognition by the AKC and WWKC (Worldwide Kennel Club.) 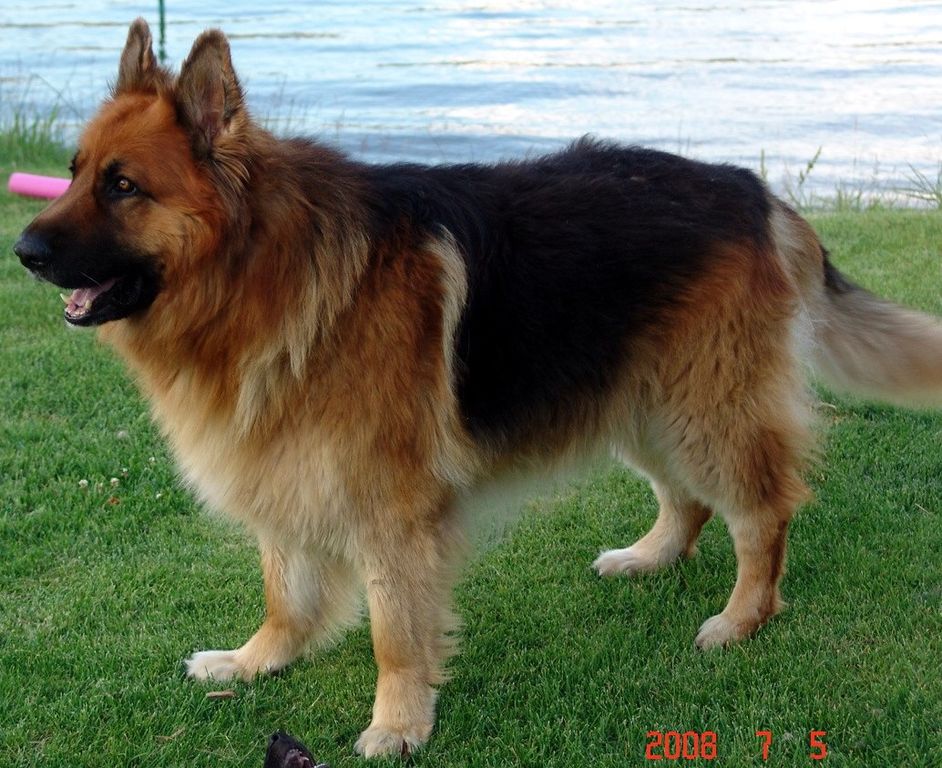 The King Shepherd is a large, long and strong dog with an imposing presence. Males weigh in at 90 to 150 pounds on average, and females tend to range from 75 to 110 pounds. Both males and females are around two feet or higher from heir shoulders to the ground, 26-29″ on average for males and 25-27″ for females.

Their heads are large and boxy, with a progressive narrowing to the muzzle. The eyes are brown, and their noses are black, although “snow nose” variations are accepted by the ARBA. Their triangular ears stand erect on their heads and often have thick, furry edges.

Coat colors for the breed standard can be tan, brown, sable, rusty red, white, silver or black. Their straight or curly haired double coats are medium in length and tend to be of a medium to slightly thick density. Sometimes the straight coated dogs and curly coated dogs are referred to as different types of King Shepherds, but they are the same breed.

Given a healthy lifestyle and home life, the average King Shepherd will live from 10 to 11 years. Their life expectancy tends to be a little shorter than the German Shepherd’s.

As with most designer hybrids, most King Shepherds come with tendencies toward common health issues that owners should be aware of. Of the most common health concerns for the breed include Gastric Dilation Volvulus, hip dysplasia and Von Willebrand’s Disease.

Gastric Dilatation Volvulus, also known as bloat, twisted stomach or gastric torsion, is a condition in which a dog’s stomach becomes excessively stretched, and often rotated or twisted, due to an overabundance of gas. This condition can be caused by overeating or excessive water-drinking. It is more common in males and older dogs.

Symptoms of GDV to watch for include swelling of the abdomen, vomiting or dry heaves, arching of the back, general discomfort and anxiety, excessive drool, pale colored gums or tongue and sudden collapse.

The King Shepherd, as with most large breeds, is also prone to hip dysplasia. This type of joint dysplasia occurs when the hip joints are not formed properly, and the condition is generally apparent from birth.

Symptoms of hip dysplasia include lack of interest in exercise, decreased activity, refusal to jump or climb stairs, limping or lame hind legs, uneven gait, loss of muscle mass in the thighs and difficulty rising from a sitting or lying position.

Von Willebrand’s Disease is another common condition in King Shepherds. This condition is more likely to occur where a German Shepherd parent has the disease, or has the disease in its recent ancestry. VWD is a blood disorder in which the blood struggles to or fails to clot after injury.

Symptoms of Von Willebrand’s Disease include bruised skin, bleeding of gums and nose, prolonged bleeding after an injury or during surgery and visible blood in the urine or stool.

All of these conditions may become very serious, but all can be treated and monitored with proper veterinary guidance and regular checkups. If you suspect that your King Shepherd may have any of these health problems, consult your vet immediately.

Typical Temperament Of The Breed

The King Shepherd is a sweet, affectionate breed. These dogs are known for their loyalty, friendliness and intelligence, and they make wonderful family pets. Because of their protective natures and their size, the King Shepherd breed is also known to make a fantastic guard dog.

As a watchdog, your King Shepherd will be loyal to you and all of your family and friends. They are naturally non-aggressive, to the point that they are often somewhat indifferent to the presence of strangers. However, with regular socialization, they will learn to be friendly to newcomers, and, with adequate training, to be a protective front against unwanted strangers or other possible threats.

A long and celebrated history for this working dog serves this hybrid well. As a highly intelligent dog, King Shepherds are regularly chosen as police dogs because of their ease to train, loyalty and imposing size. They also make wonderful therapy dogs. 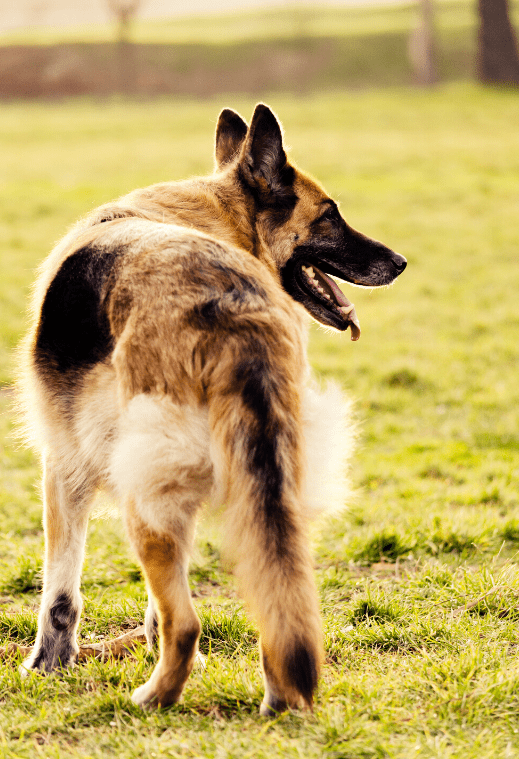 Intelligence And Training For the Breed

The King Shepherd’s trainability is very high, and their intelligence and eagerness to please make them quick studies. Even first time dog owners should find them to be one of the easiest dog breeds to train. However, you should begin training your King Shepherd puppy immediately. They have a lot of energy, and they’re very clever. So mentally stimulating games are fun and effective for training.

Operant conditioning is the ideal way to train your King Shepherd. Through a set of consequences, including rewards, this scientific method to training will have your dog performing tasks and behaviors on command in no time. This method can be used for anything from sitting on command to leash training.

This breed can be very friendly and affectionate, both to children and other animals. But socialization will still be a necessary part of training. Especially if you want your King Shepherd to be a family dog.

Because King Shepherds are large dogs, they eat a lot. As with any breed, the amount of food your dog requires will depend upon multiple factors, such as gender, age, weight and metabolism. But on average, you can expect to feed your King Shepherd between three and four cups of dog food per day.

A high quality dry dog food is a great place to start. Even better, choose a kibble that’s formulated for larger dogs and has a high protein content. You can supplement the dry food with wet food, and you can also feed your King Shepherd a partly or wholly raw food diet.

If you are not sure of the best food to give your King Shepherd, or how much to feed, consult your veterinarian. Besides working with you on a personalized feeding plan for your pet, a vet can be a great supplier of quality dog food and treats.

Exercise Requirements For The Breed

As with most large breeds, the King Shepherd is high energy and requires a lot of exercise. A daily walk, even a long one, is not enough to satisfy an adult King Shepherd’s activity levels. At least 60 minutes of daily exercise is recommended for the breed, and a verity of weekly activities is ideal.

Instead of simply walking, you can take your King Shepherd on a jog with you. Your dog may even enjoy trotting along beside you while you are riding a bike. Backyard activities like fetch and tag are wonderful options. You can enjoy indoor games with your King Shepherd by hiding toys for him to fetch or treats for him to discover.

Thankfully, since they do make wonderful family dogs, you can easily enlist other family members to help you ensure that your pooch gets enough exercise and playtime. 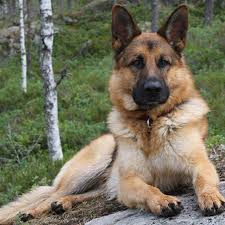 Grooming For The Breed

The King Shepherd doesn’t require any fancy grooming, but they do need a lot of brushing. Their moderately thick coats are prone to a lot of shedding, particularly in the spring as they prepare for hotter weather. Expect to brush your King Shepherd two to three times every week for optimum results.

You shouldn’t need to bathe your King Shepherd very often. If your dog does become overly dirty or smelly, be sure to use a special dog shampoo designed to maintain a healthy skin and coat.

Since they need a lot of exercise, your King Shepherd will probably do a fine job of wearing his nails down himself. But if you do need to occasionally trim the nails, it is advisable to seek the aid of a professional groomer or veterinarian.

Brushing your dog’s teeth regularly is important to good hygiene and prolonged life of the teeth. You may also choose to use dental dog treats as a supplemental way of managing your King Shepherd’s dental hygiene and to encourage fresher breath.

FAQ On The King Shepherd

1. Is the King Shepherd the right dog for me?

Their energy levels may be too much for some owners. If you don’t enjoy an active lifestyle, due to high energy levels, this breed is probably not appropriate for you. They also take up a lot of space, and those with smaller homes may find the King Shepherd a bit intrusive and always underfoot. But the KSD makes a fantastic guard dog and a great canine friend. So if protectiveness and companionship are what you seek, you can’t really go wrong.

2. Where can I get a King Shepherd puppy?

If you’re looking for a purebred King Shepherd, you should always start with reputable breeders. These breeders can be found through clubs and associations that officially recognize the King Shepherd breed.

Adopting rescue dogs, whether from a private owner or animal shelter, is also an option. However, bear in mind that without paperwork or registration through an official club or other organization, you can’t be sure that you are actually getting a purebred dog.

3. How much does a King Shepherd puppy cost?

A purebred King Shepherd will set you back anywhere from $1500 and $3000. They are a rather expensive designer hybrid, probably, in part, because they seem to be somewhat difficult to acquire due to their increasing popularity.

Make sure that your puppy is registered with a reputable club or association, such as The American King Shepherd Club or the American Rare Breed Association. If you are getting what seems like a really good deal on a puppy, it probably isn’t coming from a trusted breeder and may not have any lineage or health paperwork.

4. How much do King Shepherds eat?

These dogs are pretty big, and they do eat a lot! An average active King Shepherd requires anywhere from 1,800 to 2,500 calories a day. That’s as much as an adult male human, so you can expect to be buying a lot of kibble if you adopt one of these dogs.

A lot of large dog breeds, like King Shepherds and German Shepherds, have a false reputation for being aggressive and dangerous. This may be in part because of they are so large, and their aloof personalities may be mistaken for aggression. They are also often used as guard dogs and police dogs, which may add to the myth that they are dangerous. However, King Shepherds are generally very friendly and affectionate dogs. Any small amount of aggression that might occasionally occur can easily be trained away, especially if you begin at puppyhood.