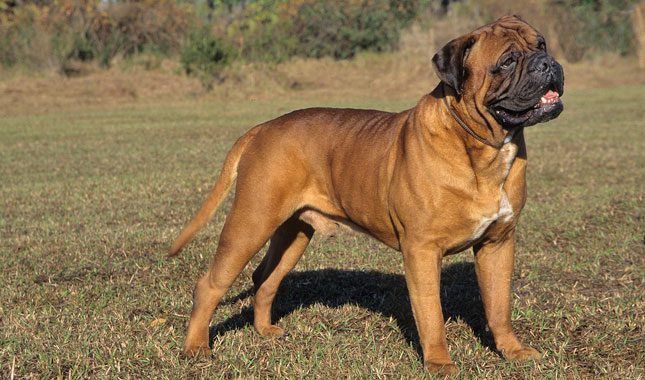 The Bull Mastiff is a very large dog that is a cross between the Bulldog and the Mastiff dog breeds. This breed is strong and alert and appears to be about 60% Mastiff and 40% Bulldog. The Bullmastiff’s head is large and square with pronounced stop and short broad muzzle.

This breed has a solid body with deep, broad chest and short back The Bull Mastiff’s coat is short with hard water resistant hair lying smooth on the body. These dogs colors include brindle, fawn or red and can have black markings on the head.

The breed is very large with male dogs standing 25 to 27 inches and females 24 to 26 inches at shoulder height. Male dogs can tip the scales at 110 to 130 pounds and females somewhat lighter at 100 to 120 pounds.

Bull Mastiffs were developed in England towards the end of the 19th century. Gamekeepers needed a dog to help them stop poaching which had become a very dangerous problem on the English estates.

They needed a dog with the courage and aggression of a Bulldog and the power, speed and sense of smell of the Mastiff. Bull Mastiffs were trained to track down and subdue poachers without injuring them.

More recently the breed is being used as a guard dog by the military and police forces and also has become popular as a family pet. The Bull Mastiff was ranked 47th out of 154 dog breeds in 2004 AKC registrations.

The Bull Mastiff is loveable and trustworthy but also fearless and afraid of nothing. Normally this breed is mild mannered and docile but once aroused can be aggressive with other male dogs and strangers.

Despite this, the breed is very tolerant of children and small pets. However the Bull Mastiff is too big a dog to be a small child’s pet. A young puppy or adolescent dog is exuberant and could inadvertently knock a toddler flying. This breed needs a firm and knowledgeable master.

Bull Mastiff puppies must have early socialization and obedience training that is reinforced through adulthood. This breed should not be taught rough-housing games and at any sign of aggression get professional training assistance.

This dog breed is too large to allow it to have any unruly behavior. Bull Mastiffs make great family pets for families with older children. Bullmastiffs make fantastic watch dogs and great natural guard dogs but should never receive additional guard dog training.

These dogs are not suitable for novice or first-time dog owners.

Bull Mastiffs do not require a lot of exercise but should be exercised regularly to keep them trim. This breed is somewhat lazy and inactive indoors and can make do with a small city backyard. Bull Mastiffs do not like hot humid conditions and love shade and air conditioning.

If the Bull Mastiff is walked every morning and evening, it can become a ‘couch potato’ during the day and adapt to apartment life. This breed can even adapt to being left alone during the day.

Bull Mastiffs require minimal grooming beyond an occasional brushing and regular toweling to wipe off the drool. This breed is a low to moderate shedder.

This giant breed has a life expectancy of from 8 to 10 years. Common health problems include hip dysplasia, tumors and some eyelid problems. Other problems can include bloating, twisted stomach and skin allergies. Bull Mastiffs do better on two smaller meals a day rather than one large meal.