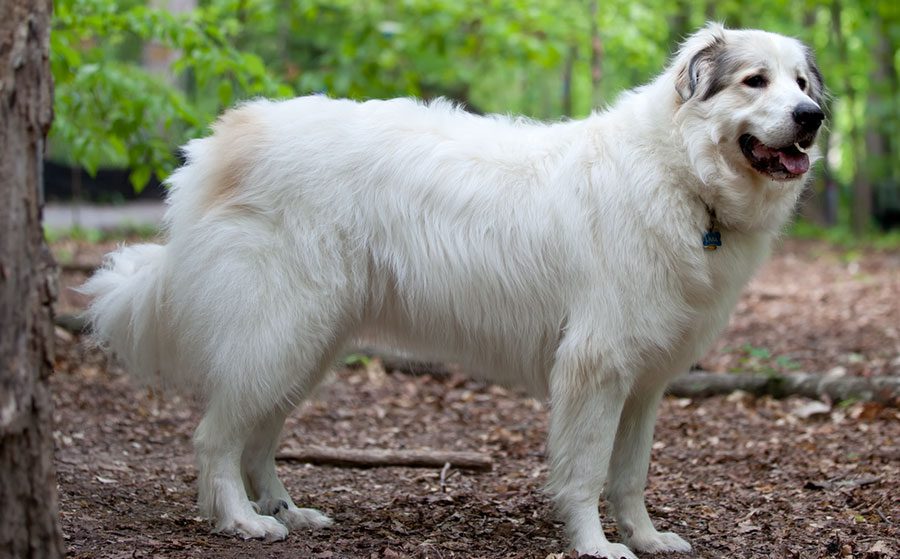 The Great Pyrenees is a large and strong dog that is probably the most powerful of all dog breeds. The Pyrenees or Pyr is a very handsome dog that is almost irresistible as a puppy.

The Pyr has a double coat with an abundant undercoat of fine hairs and a medium to long, thick and coarse outer coat with longer hair on the neck, tail, and hind legs. The Pyrenees are almost all white, with or without grey, badger grey, pale yellow or tan markings on the body.

Pyr males stand about 27 to 32 inches tall and females about 25 to 29 inches tall at shoulder height. Pyrenees weigh from 85 to 125 pounds.

Pyrenees are also known as the Pyrenean Mountain Dog and were used in the Pyrenees Mountains, between France and Spain, to guard sheep flocks against wolves and bears. Pyrs are probably descended from the Tibetan Mastiff and were used by Louis XIV to guard the Louvre. Pyrenees were ranked 57th out of 154 dog breeds in 2005 AKC registrations.

The Pyr is a good-natured, gentle, loyal, affectionate, brave and intelligent dog. The Pyrenees will guard and aggressively defend its family against any threats. This large breed has a tendency to act independently and can also be somewhat stubborn.

This means you must control your Pyrenees through extensive socialization and continuous obedience training while he is a puppy and adolescent. Get professional assistance by taking your Pyr obedience training classes during the first few years of his life.

Pyrenees are very good family dogs and are loving and very patient with children. Toddlers must be supervised because the potential for toddler knockdown is high with any young dog of this size. After the Pyrs mature, they become much calmer and will even turn into indoor couch-potatoes.

Mature Pyrs can adapt to being left alone during the day if they are given lots of exercise and attention in the morning and evening. Pyrenees do best in the country but can adapt to large city yards. Yards should be well-fenced as Pyrs have a tendency to roam.

Pyrenees like to be outdoors in cold weather. Pyrs will defend their territory and will be aggressive towards other large dogs but are fairly friendly with strangers. This breed does best with an experienced owner.

The Pyrenees need regular daily exercise. Don’t exercise young dogs too vigorously while they are growing. After the Pyr matures, it has a tendency to become somewhat sedate and you should continue the long daily walks. Pyrs don’t like to play fetching games but give them a cart or sleigh to pull and they are happy.

This breed must be brushed and combed two or three times a week to keep its coat in good condition. However the Pyrenees is a heavy shedder and will need daily or twice daily brushing during shedding.

Great Pyrenees have a lifespan of 8 to 12 years. This is a fairly healthy breed with a few common health problems such as entropion (eyelid disorders), congenital deafness, cataracts, progressive retinal atrophy and bloat.

Hip dysplasia, elbow dysplasia and patella luxation is present in the breed but not too widespread. Information on many of these genetic diseases can be found in our article Hereditary Diseases in Dogs. Prospective buyers should ask for the breeding parents Orthopedic Foundation for Animals (OFA) test results for hip dysplasia and also the Canine Eye Registry (CERF) recent ophthalmologists report for eye disorders.