You are here: Home / Dog Breeds / The Red Nose Pitbull – The Facts About This American Terrier 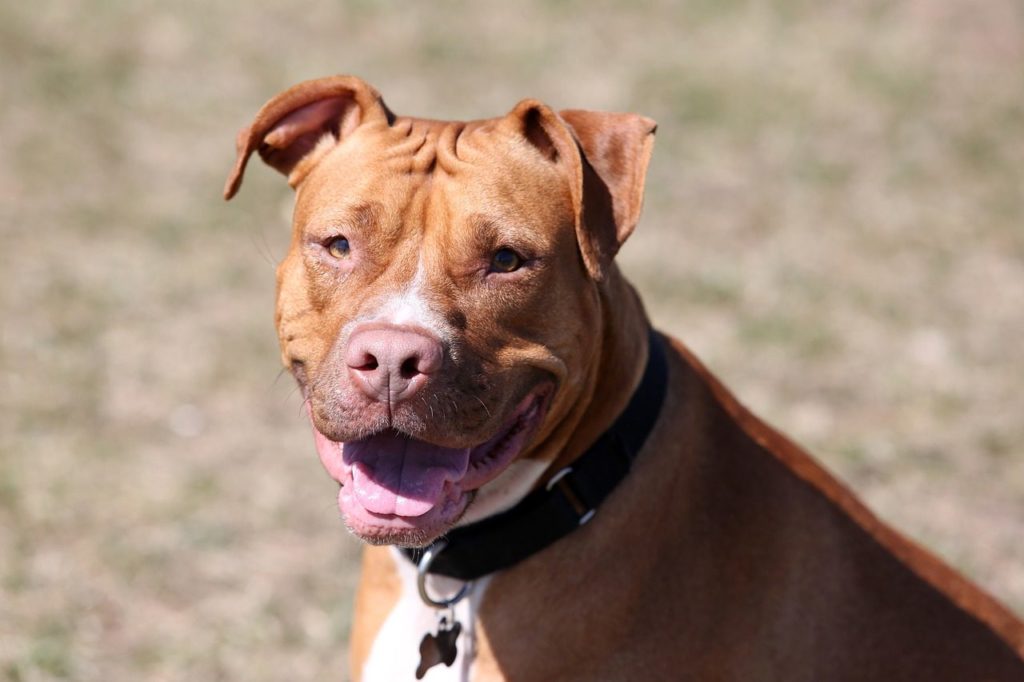 Unfortunately, they are surrounded by a lot of controversies because they fall into the Pitbull breed, but when trained right they can be sweet, loving and perfect pets. Read on to find out more about the Red Nose Pitbull and whether they’re the dog for you.

History Of The Red Nose Pitbull

It is thought that Red Nose Pitbulls were used as working dogs and as fighting dogs even as early back as 4000 BC. Other than that, Red Nose Pitbulls are known to originate form Ireland and come from a long line of Old Family Red Nose strain of Pitbulls.

Red Nose Pitbulls were recognized for their ferocity and gameness and therefore the creators used selective breeding to retain the purity of the strain. In around the mid-1900s, the Red Nose Pitbull came to the US alongside Irish immigrants. 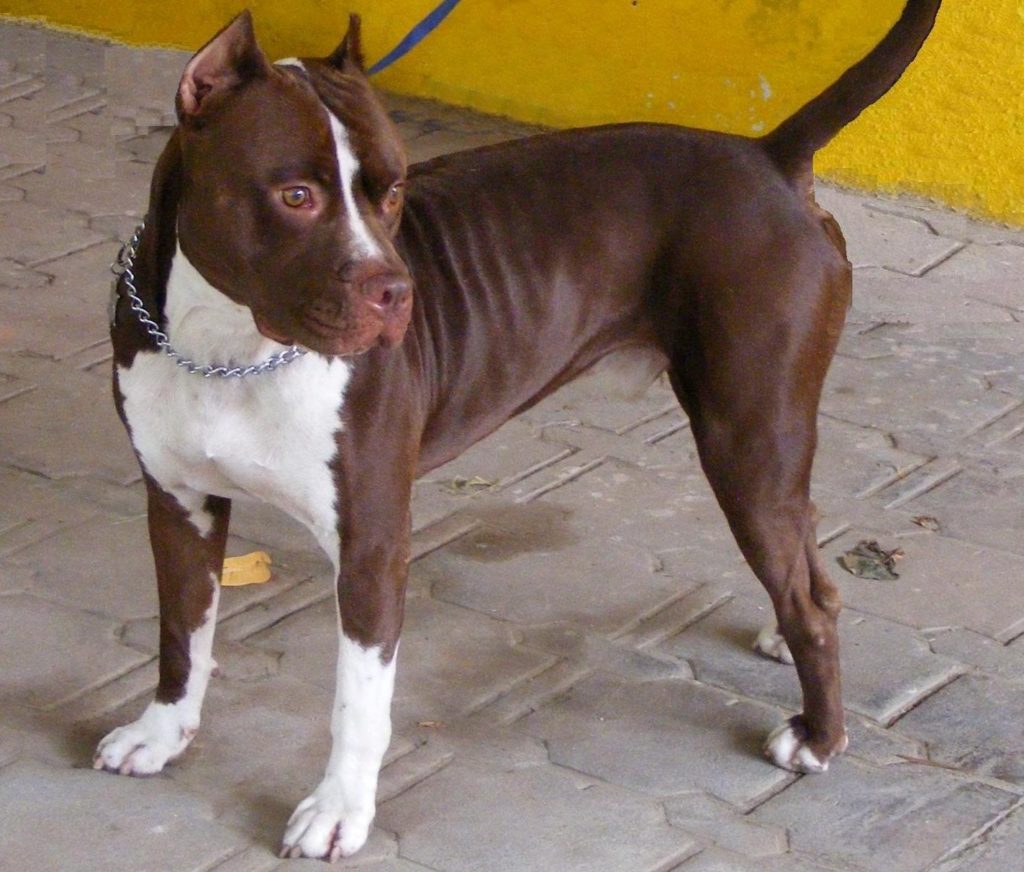 Red Nose Pitbull Terriers, like the Blue Nose Pitbull, are far more expensive than other colors of their breed. You can end up spending thousands of dollars on a Red Nose Pitbull when buying from a breeder. Lets take a look at some of their most prominent characteristics.

Their chiseled head is like a brick and they have very strong, powerful jaws. They also have a muscular neck and a full chest for extra strength.

The Red Nose Pitbull has a beautiful red, brown or copper color to their fur, lips and toenails, plus amber eyes. They can also have patterns of white fur on their bodies, particularly on their chest and toes. These are unique features in a Red Nose Pitbull that you can see from birth.

The Red Nose Pitbull Terrier coat is short and fine and very smooth. Because of this, grooming them is very simple. We will go into more detail about this below. Red Nose Pitbulls does not have a hypoallergenic coat — they shed moderately twice a year.

Despite their history of fighting and the common concept that Pitbulls are aggressive, but this is not true. When a Red Nose Pitbull is raised correctly, they can be very sweet and loving dogs. All dogs have the potential to be dangerous and the Red Nose Pitbull is no different, but when trained properly they can make perfect pets.

A Red Nose Pitbull craves interaction, attention and companionship. They love to be around you and are gentle and friendly dogs. They are great pets for the family and are known for being great with children.

That being said, you should have experience with training a larger dog before taking a Red Nose Pitbull into your home, so you can be sure you will be able to control them. We will go into more detail about training your Red Nose Pitbull below.

Pitbulls are known for being more of a hardy dog with less health issues than many other breeds of dog. However, there are some known health issues within this breed.

Red Nose Pitbulls can suffer with joint problems because of their posture. Because their frame is heavy, it puts strain on their ligaments and joints. This can cause chronic damage and even leg lameness. One way to stop this from happening is to make sure they do not become overweight.

This breed is known for skin conditions, so you should check your Red Nose Pit’s coat for anything out of the ordinary like scabs or hot spots regularly. They are also likely to suffer from retinal degradation, which affects their sight. If you suspect your dog is having problems with their vision, you should take them to the vet.

Hip dysplasia, degenerative myelopathy and kneecap dislocation are three other health problems Red Nose Pitbulls can suffer with too. 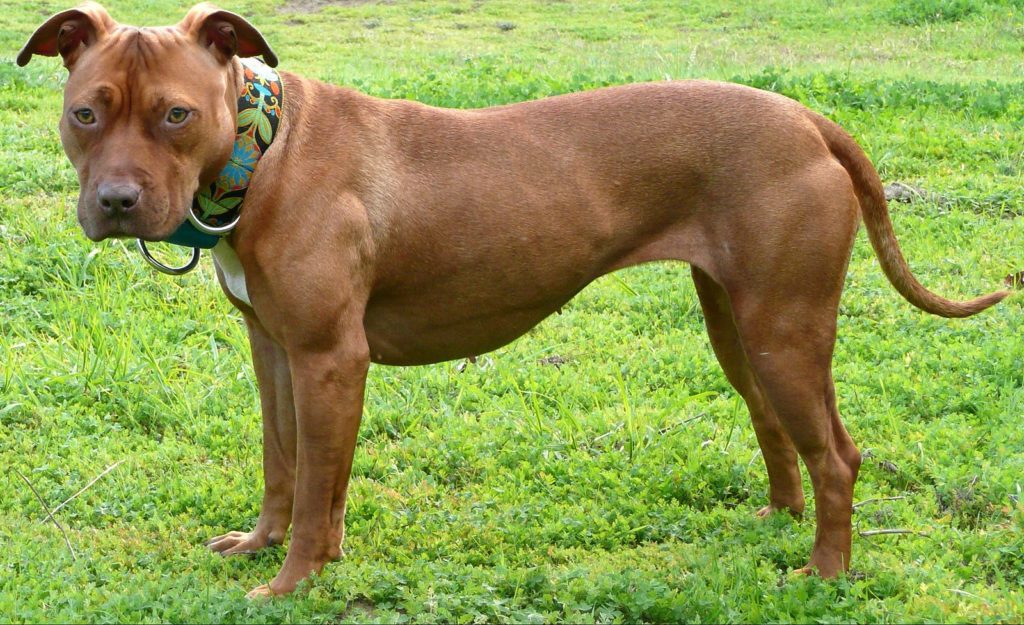 Red Nose Pitbull Terriers are a strong and active dog that really benefit from being outside. They also need a good diet to stay healthy, as well as a lot of social interaction from you.

Your Red Nose Pitbull’s diet should be tailored to their size, age and needs. It should always be well-balanced and healthy, changing as they get older and their calorie needs change.

As a puppy, your Red Nose Pitbull will benefit from dry kibble. You should feed them about a quarter to a ½ cup of food that is divided into 4 to 6 meals every day until they become six months old. Once they reach six months, you can switch their schedule to just three meals a day.

Red Nose Pitbull puppies can’t digest protein as well as grown up Pitties, so you should make sure the protein you are feeding them is of high quality. The protein content of the dry kibble should be around 30% to 40%. They should have about 14% to 17% fat in their diet from good sources such as fish oil or chicken fat as well as calcium to help their bones go strong.

You shouldn’t leave your puppy’s bowl of food full and laying around, because this invites your puppy to overfeed themselves. If you want them to be healthy, you should feed them the four to six meals a day.

Once your Red Nose Pitbull reaches 18 months, their diet should be switched again to work for their changing body. If your Pitbull is large they may need three cups of food a day, where as a smaller Pitbull may only need two-thirds of a cup or less of dry food a day.

Be careful with overfeeding your Pitbull. Just because they are active, it doesn’t mean they need more food. A fit and healthy Pitbull should have an hourglass figure when you look down at their body and you should be able to feel their ribs.

It is very important that your Red Nose Pitbull gets the right amount of exercise. As we mentioned above, Red Nose Pitbulls are active dogs who benefit from being outside. You should give them around an hour of exercise, both physically and mentally, to keep them in the best shape.

They can enjoy both indoor and outdoor activities, so their is no excuse for not playing with them. if you let your Red Nose Pitbull get too overweight, they can begin to exhibit destructive behavior.

Red Nose Pitbulls are great family doggies and are known for being great with children. It is often advised that you have some experience with larger dogs or training a larger dog before picking a Red Nose Pitbull to join your home.

Your Red Nose Pitbull dog needs to be socialized from a very early age so they understand how to react in certain unfamiliar situations.

This will help them to realize that not everything around them is a threat. If they are well socialized, your dog will be the most sociable dog in your area. Red Nose Pitbulls love to be around people and do not do well when left on their own for long periods of time.

If your Pitbull is left alone for more than 3-4 hours at a time, they can begin to show signs of separation anxiety and you may notice some destructive behavior. You should make sure they have plenty of toys if you do need to go out for longer than that.

You should also give your Red Nose Pitbull somewhere in the house that is just theirs. This is great for when they feel overwhelmed and need some quiet time to themselves.

Most Red Nose Pitbulls are very easy to train. They are very intelligent animals and work well with the use of lots of positive reinforcement, rewards and praise. They love treats and toys when they do something right.

You will need to make sure you establish who is in charge when first training your Pitbull.

Make sure you use a strong voice and maintain eye contact. Even when your Red Nose Pitbull doesn’t respond correctly to a command, make sure you show them love and affection. By showing them you love them, it will actually speed up the training process and make it much easier for you.

We mentioned above that Red Nose Pitbulls are very easy to groom because of their smooth and short coat. You should brush their coat daily, but this is very easy because the hairs are very fine. There won’t be any tangles, but you should be brushing them to ensure that the oils in their fur are distributed evenly.

You can give them a bath once a month or when needed, using on a dog shampoo to not cause irritation. We mentioned above that Red Nose Pitbulls are prone to skin irritation so you need to be checking your dog’s coat for scabs and hot spots.

Checking your Red Nose Pitbull’s ears is also important to prevent infections, as is washing the area around their eyes to stop staining and to keep infections at bay. You should also brush their teeth once a day to prevent bad breath, or you can use chewable dental sticks.

We touched on this above but the answer is no. There is a common misconception that all Pitbulls are dangerous, but when trained properly and brought up in a loving and caring environment, Red Nose Pitbulls are affectionate, loyal dogs and love to be around people. They have been known to exhibit signs of aggression when not trained properly or when they do not receive enough social interaction, but if you raise your pup right you shouldn’t feel in danger when around them.

In some areas of the United States, Australia and the UK, Pitbulls and other related dog breeds are under breed-specific laws. These laws prevent residents in those areas from owning these dogs, expect from under special circumstances. Pitbulls in these areas are seen as a danger because of their reputation and dog fighting background, even though there is a huge amount of evidence to show that when trained properly Pitbulls make great pets.

Aside from those differences, they are very similar. They have the same temperament and make great family pets. Neither of them are violent.

How much does a Red Nose Pitbull cost?

The cost of a Red Nose Pitbull depends on where you buy them from. From some breeders they could cost $500, but from other breeders they could be over $1000. It is important to remember that just because one breeder is more expensive than another, it does not necessarily mean you are getting a better dog. You should meet the breeder first before buying and look at the way they are raising the puppies to see if they are happy and healthy.

Red Nose Pitbulls have a reputation for being a violent and aggressive dog, but this couldn’t be further from the truth. With the right training and social interaction, these dogs are sweet, loving and good-natured. They love spending time with you and benefit from lots of exercise.

You should be familiar with training a large dog before purchasing or rescuing a Red Nose Pitbull, although training is not hard but is essential. These pups make excellent family dogs and hopefully you’ll think about making one a family member.