The Soft Coated Wheaten Terrier or Wheaten is a medium-sized working dog. The Wheaten has a square and compact body, level back, deep chest and straight muscular legs. The tail is customarily docked to about one third of its length in countries where docking is permitted.

The Wheaten’s head is medium long with a flat skull and a square muzzle. The ears are small to medium and fold forward at skull level. The hazel eyes are medium-sized and set fairly far apart and the Wheaten has a large black nose.

The Wheaten’s single coat is soft and silky, fairly long, and can range from slightly wavy to curly. Puppies don’t have this soft and silky textured coat and it can take as long as 30 months for the final coat to grow in. The Wheaten’s coloring looks like ripening wheat and can range from fawn to pale yellow. Male Wheatens stand 18 to 19 inches tall and females 17 to 18 inches tall at shoulder height. Females should weigh from 30 to 35 pounds and males from 35 to 40 pounds. 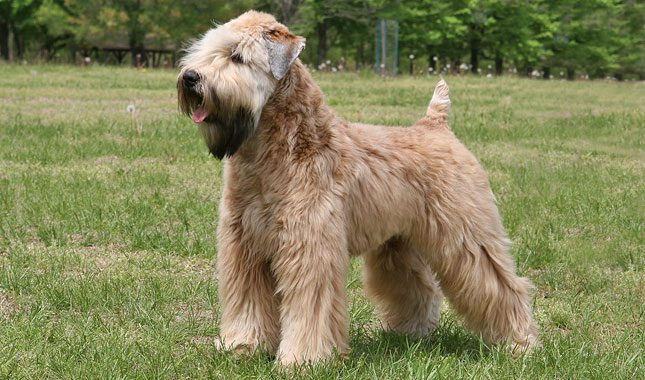 The Wheaten is the oldest native Irish terrier and is probably related to most Irish terriers. The Soft Coated Wheaten was developed as a working farm dog and used to: herd cattle; hunt small game like badgers, rabbits and foxes; guard the farm house; and even act as a hunting gun dog. The Wheatens numbers decreased alarmingly in the 1930’s and the breed was rescued through careful breeding. The Irish Kennel Club recognized the breed in 1937 and the AKC in 1973. The Soft Coated Wheaten has grown to be a popular companion dog in the US and was ranked 59th out of 154 dog breeds registered by the AKC in 2005.

The Wheaten Terrier is cheerful, active, busy, playful and affectionate. The wheaten is independent and self confident but also fairly intelligent and eager to learn. Wheaten puppies should be socialized early with children, other dogs and strangers. The breed is fairly easy to train if you can get their attention. House training can be a problem with some Wheatens. See our report on Puppy Training for advice. Wheatens get along fine with older children but can be too playful and assertive with young children and toddlers. Wheatens are much more sociable than most terriers but will still need obedience training to control their active and assertive nature. If the Wheaten gets lots of exercise, playtime and attention it can adapt well to being indoors. Wheatens are alert and make good watchdogs even though they get along extremely well with strangers. Wheatens do well with first time dog owners as long as the owner is firm and assertive.

Wheaten Terriers need quite a bit of exercise including long daily walks and lots of time to romp and play ball in the backyard. Wheatens will be much quieter around the house if they get sufficient exercise. Wheatens do well in competitive dog sports such as flyball and agility.

The Wheaten doesn’t shed but should be combed out a few times per week to prevent tangles. The American Wheaten has a heavier and thicker coat than the British or Irish Wheaten. The American breed requires more grooming and the coat needs to be elaborately clipped for show competitions. The British counterpart has a softer coat which is traditionally kept longer. The beard, moustache, legs and chest hair is usually kept longer than the rest of the coat. Wheatens are non shedding or low shedding dogs and if properly groomed are said to be hypoallergenic.

Wheaten Terriers have a life expectancy of 12 to 14 years and are generally quite healthy. The most common health problem is kidney or renal disease which is quite prevalent. Eye problems such as cataracts and progressive retinal dysplasia, skin conditions and allergies occur in some bloodlines. Information on some of these genetic diseases can be found in our article Hereditary Diseases in Dogs. Wheatens can be sensitive to anesthetics and certain medicines. Prospective buyers should ask for the breeding parents Canine Eye Registry (CERF) recent ophthalmologists report for eye disorders and inquire about kidney disease in the bloodline.