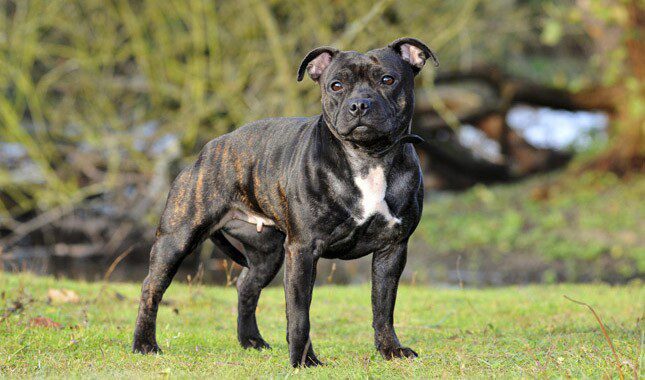 The Staffordshire Bull Terrier, English Staff, Staffie or Stafford is a very strong and muscular medium size dog breed. The Stafford has a compact and muscular body with a level top line and a long tail which is carried low.

The Staffie has sturdy straight front legs which are set quite far apart. The broad head sits atop a short muscular neck and the ears are half-pricked or rose (folded to show the inside burr). Full prick or full drop ears are considered a fault.

The coat is soft, short and sleek and lies close to the body. Most colors are acceptable except black and tan or liver color. Staffords are usually black, red, fawn, white, blue or brindle; with or without white markings. Staffies stand 13 to 16 inches tall at shoulder height and males weigh from 27 to 38 pounds and females from 23 to 33 pounds.

History of The Staffordshire Bull Terriers

The English Staff was developed in the Staffordshire region of England from crosses of old English bulldogs and various terriers for the purpose of dog fighting. The original fighting dogs were probably descended from Bulldogs and Mastiffs that were used for bull baiting and bear baiting in Elizabethan times.

In the 19th century smaller and faster dogs were needed for dog fighting and the English Staff was developed. Fortunately dog fighting was made illegal and most breeders have concentrated on minimizing aggression and developing friendly and active companion dogs.

The Staffie was recognized by the Kennel Club in England in 1935 and by the AKC in 1974. Unfortunately most of the original fighting breeds such as the American Staffordshire Terriers, the Staffordshire Bull Terriers and the Pit Bull Terriers have all been thrown into a broad class called “pit bulls” which have received a lot of bad press and have even been banned in some cities.

The Stafford is a lively, intelligent, affectionate and playful dog. The spirited and people loving English Staff needs a lot of exercise as an outlet for his energy. This breed adores its family and wants to be with them all the time.

If the Staffie is socialized early then it gets along fine with household cats and dogs, although male Staffords should be neutered and may not get along well with other male dogs in the household.

This is not a breed that you can let off its leash in a park as it will fight with other dogs if challenged. Staffies get along well and love to play with older children but should be supervised with small children in case they get too boisterous. Staffords can be somewhat stubborn and need early, firm and consistent training but can be trained for agility and obedience competitions.

The Staffords have very strong jaws and love to chew everything in sight when they are puppies. Make sure that you give them the strongest possible toys as they will destroy vinyl type toys and swallow the squeaker. 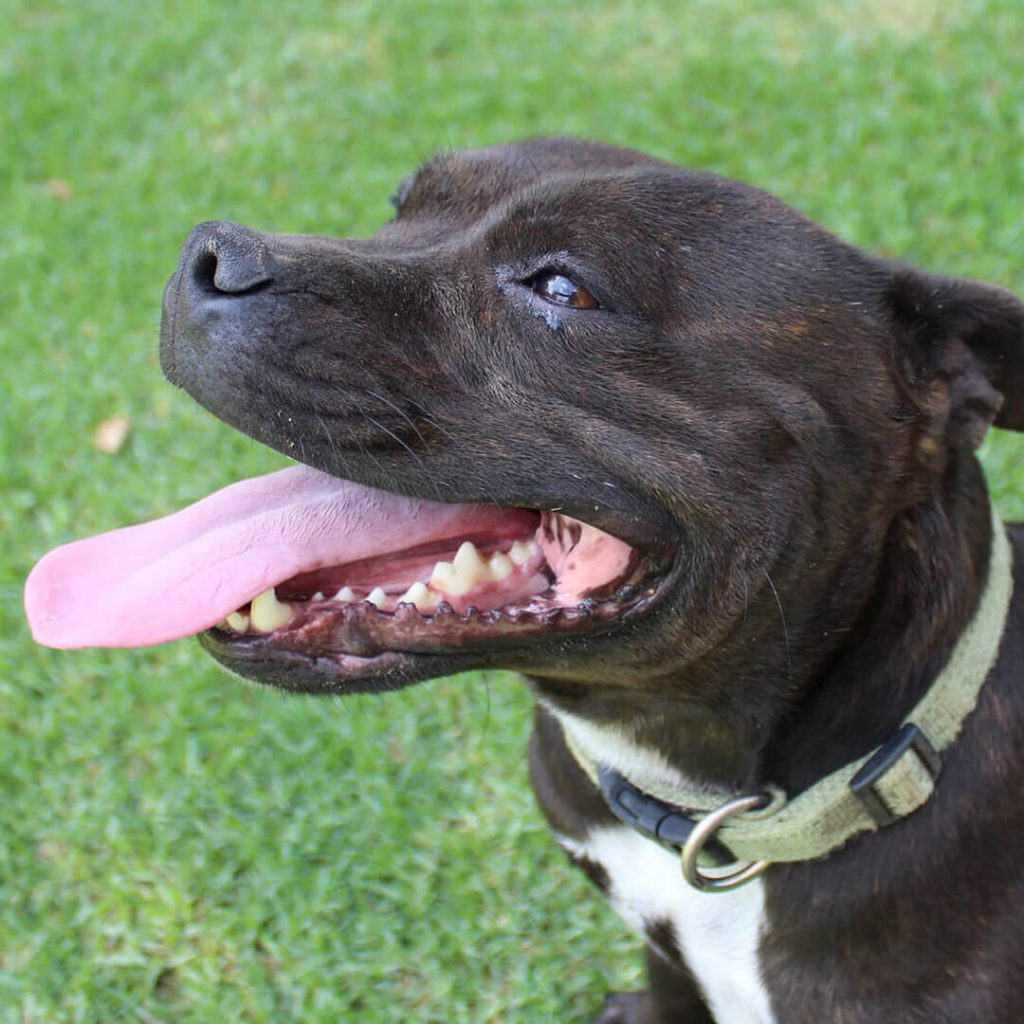 Staffords don’t bark much but will make a fair watchdog and bark to warn you of an approaching stranger before welcoming them into the house. The Staffie will challenge for position in the household and needs a firm and experienced owner. This is not a dog for a novice owner.

Staffords need a lot of vigorous play and exercise in a fenced yard and then they will be calm and quiet indoors. Yards should be securely fenced with at least a six foot tall structure.

Staffies are extremely good at escaping and can climb tall fences or dig underneath them or just demolish a flimsy fence. Staffords should be kept on leash at all times when outside their yards as they may fight with other dogs when challenged.

The Stafford needs minimal grooming beyond an occasional brushing with a soft bristle brush and a shine with a towel. This terrier breed is a moderate shedder and when it is shedding, the dead hair can be removed with a rubber massage glove.

English Staffs are a generally healthy breed and have a life expectancy of 12 to 14 years. Common health problems include cataracts and other eye disorders and hip dysplasia in some bloodlines.

Prospective buyers should also check the local bylaws and their household insurance to see if there is any restriction on this breed of dog.