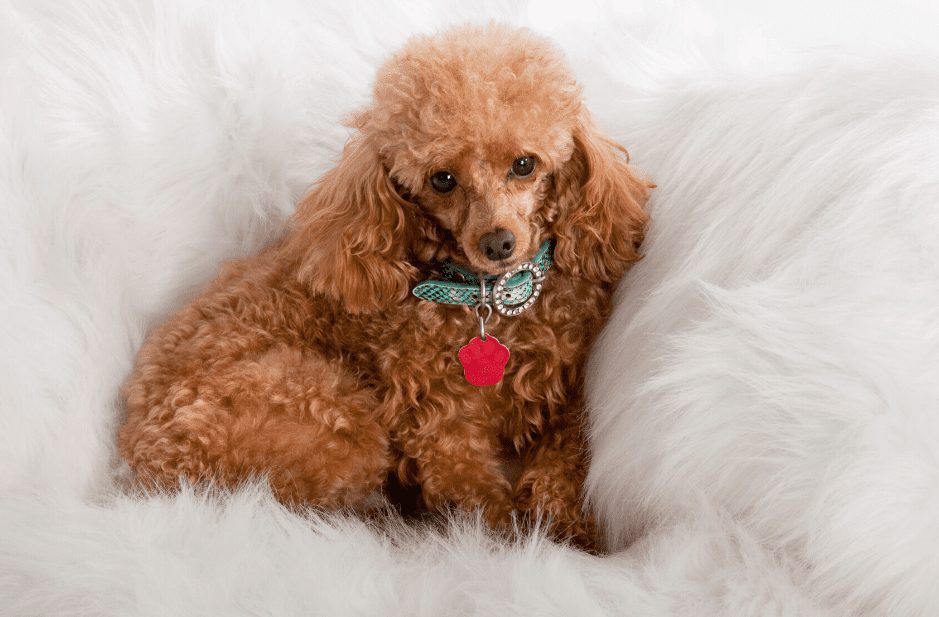 The Toy Poodle is one of the smallest versions of the Poodle breed. However, just because they’re miniature in size, it doesn’t mean they’re a boring pet! These little dogs are an intelligent and fun member of the household who love to spend the day playing but at nighttime will happily cuddle up next to you.

Identical to the Standard Poodle with the exception of their smaller size, you’ll need to be prepared for pamper sessions and lots of of physical and mental stimulation with a Toy Poodle. Read on below to find out more about this adorable little dog.

History Of The Toy Poodle

The Toy Poodle is the smaller version of the Standard Poodle and carries many of the same characteristics and traits. They were selectively bred from a Standard Poodle to become the perfect companion for those who didn’t want a bigger dog or didn’t have the space for one.

The American Kennel Club (AKC) recognizes three different sizes of purebred Poodle — Standard (standing above 15 inches), Miniature (standing between 10 to 15 inches) and the Toy Poodle, who stands at a maximum height of 10 inches.

We can look at the history of the Standard Poodle to understand where the Toy Poodle came from. The Poodle is one of the most popular dogs in the world and is in fact one of the oldest purebred dogs. The Standard is thought to be a French dog but they actually originated from Germany and were originally known as gun dogs. They were hardworking dogs that were known for their retrieving and hunting purposes.

Nowadays, this breed is more known as a lapdog rather than a working dog. The Toy Poodle originated from the Miniature variety and were selectively bred in the 18th century in England. They still have all the same features but just come in a much smaller size. This has only increased their popularity in the United States in recent years, as Toy dog breeds are very much in demand and are known as fashionable or celebrity dogs. 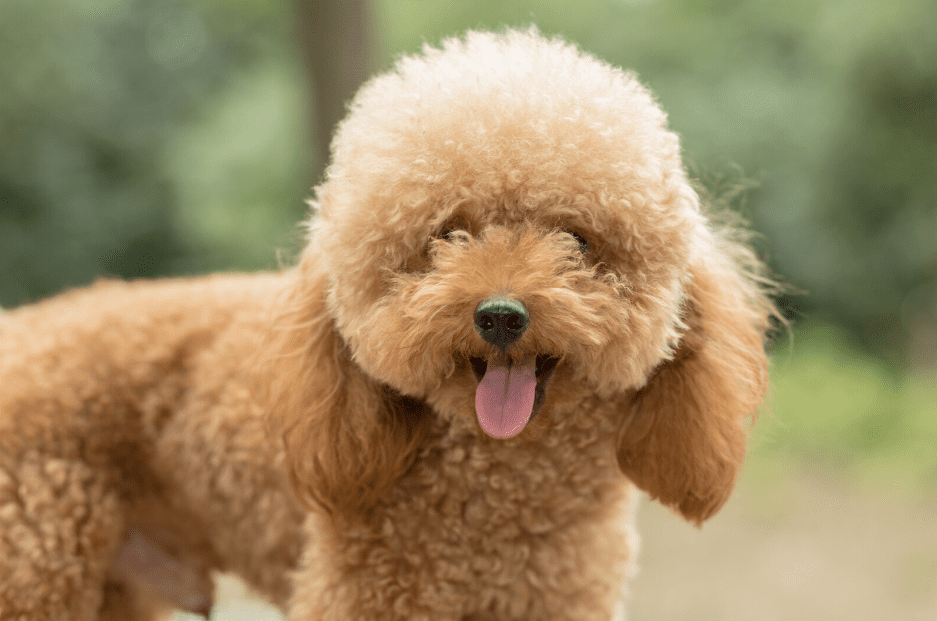 Characteristics Of The Toy Poodle

The most prominent characteristic of this dog is their size, as many of their other characteristics they share with their larger Poodle parents. Toy Poodles are born in litters of about three, which is half the size of a Standard Poodle litter. This is because the mother can’t fit as many pups in her womb. A Toy Poodle can cost anywhere between $1,000 to $2,000 and are actually one of the cheapest variation of the Poodle.

We’ve already mentioned that this Toy breed is a very small dog. They are very portable and easier to manage than the bigger variations of this doggie. When they are fully grown, they stand at a maximum of 10 inches and weigh between 6 to 9lb. A male will weigh slightly more than a female.

They have the same build as other Poodle variations. This means that they have a square head and proportioned body, and their build is petite and athletic which makes them very good at agility. Their ears are floppy and flop down the side of their head.

The Poodle coat is short to long and very curly. They have a hypoallergenic coat, which is perfect for those with allergies because it means that they do not really shed their fur. A Toy Poodle puppy has a very soft coat. This curly coat can become more coarse as they become an adult dog and does require brushing, but we will go into more detail about grooming later on.

The Poodle can come in many different colors, including white, cream, apricot, brown, black, silver and a red Toy Poodle. They are also known to come in parti (two colors) — black and white, brown and white, silver and white — or they can also come tri color parti and have three colors!

The Toy Poodle is known to be a playful, lively and loving little dog. They love to be around people, children included, and will thrive in an environment where they can play with you and join in the family fun. Although they may be shy at first, they will quickly become your loving little companion who will want to spend their day by your side and cuddle up with you on the couch at night. They do well in a number of different homes and are suitable for many different people.

Although their exercise needs are not great, they can get bored very easily and do not really like to be left alone. Training can help with issues such as separation anxiety, but you shouldn’t purchase a Poodle if you are not going to be able to be with them for large portions of the day.

The life expectancy of a Toy Poodle is relatively long. These dogs can be expected to live anywhere between 12 to 15 years.

Of course, as with any dog, the Toy Poodle is prone to some health issues. These issues can be the same issues that a Standard Poodle is predisposed to as well. The main three health problems that you may see in your Toy Poodle are:

The best way to ensure your pup is less prone to any of these conditions is to buy from a reputable breeder and to ensure you get health clearances from both parents. You should also check your dog often for any signs of these issues and take them to the vet regularly for checkups. 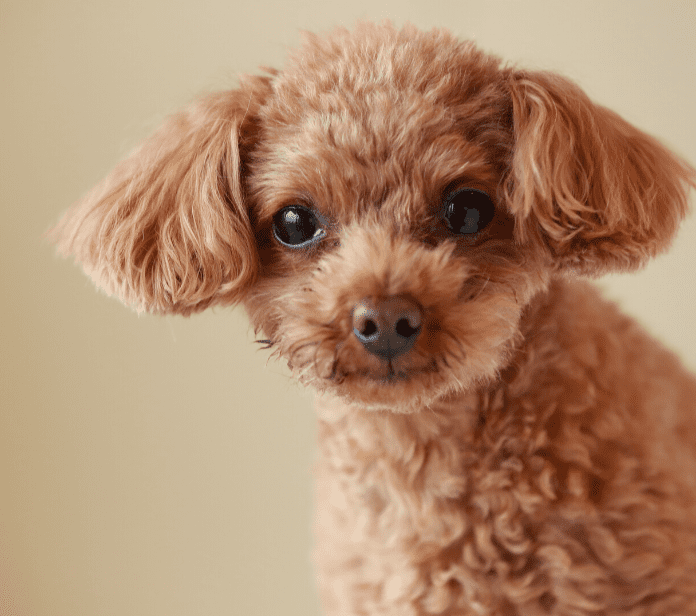 Now you now all about the characteristics and traits of a Toy Poodle and how similar they are to the Standard Poodle, we will take a look at what life with a Toy is really like. Because of their small size, they do have slightly different care requirements than the bigger variations of these pups. Caring for a Toy Poodle may seem like hard work, but they are certainly worth it!

The Toy Poodle is much smaller than the Standard or Miniature Poodle, so they have smaller food requirements. Ideally, you should be feeding them 200 calories a day, split into two meals. You should always make sure the food you feed them is high-quality and full of the nutrients they need, including protein, fat and carbohydrates.

Experts recommend you feed them dry kibbled food that is specially formulated for Toy breeds. Always check the back of the dog food packet for the exact amount of a certain food you should be feeding your pup, based on their weight. Treats are also important for Toy Poodles. Try to feed them healthy treats such as fruit.

Toy Poodles have a lot of energy so exercise is important, but because of their small size, their exercise needs are smaller than many dogs. If you over exercise your Toy Poodle then you may end up harming their smaller limbs.

It is recommended that you should exercise them for around 30 minutes every day. This should include playtime and walks. They also love to be in water and go swimming, so this is another fun activity you can try with your pup.

The Toy Poodle is an excellent family dog because they love to be around people — both adults and children. They are suited to a range of homes, whether you live in a small apartment or a big house and whether you are part of a big family or an individual senior.

Because of their small size, they do not require too much exercise, although they do need to be walked every day. They will still do well in a family that exercises a lot. They love to play, especially with children, but they are a delicate breed so you will need to supervise your small children when they are playing with your Toy Poodle so they don’t get injured.

A Toy Poodle will get on well with other dogs in the house. They will always prefer the company of humans, but with the right socialization from an early age, they can get on with other pets in the family home.

Poodles are known for being a very intelligent breed, which makes training easy. This is another reason they are such a popular dog, because they are easy to train even if you have never trained a dog before.

This Toy breed does well with positive reinforcement while training. This can include verbal praise and edible treats! You Toy Poodle, much like a Standard, will want to please you and will want to learn, so with the right rewards this will not be too difficult.

Also due to their intelligence, they require a lot of mental stimulation. We mentioned above that Poodles do not like to be left alone and will want to play with you. If you need to go out, give them a toy that will keep their brain busy while you’re away so they don’t exhibit destructive behaviors.

You should also try to take your Toy out with you as much as possible on day trips. This will not only prevent them from becoming bored, but it will also give them a chance to interact with different places, sights and smells. Socialization of any dog is important from a young age, so your pup doesn’t grow up to be aggressive towards others when they are in an unfamiliar place.

One of the things that many Poodle owners love about Toys is that you can clip their fur into different hairstyles. Because of their coat’s thickness, it means that it can be clipped in many different ways and you can change their hairstyle every time they go to the groomers.

If you’re not interested in giving your Poodle a new-do, you will still need to brush them regularly. If you don’t brush them then your dog’s coat can matt and may become unsanitary and painful. You should try to brush them every day or every other day. 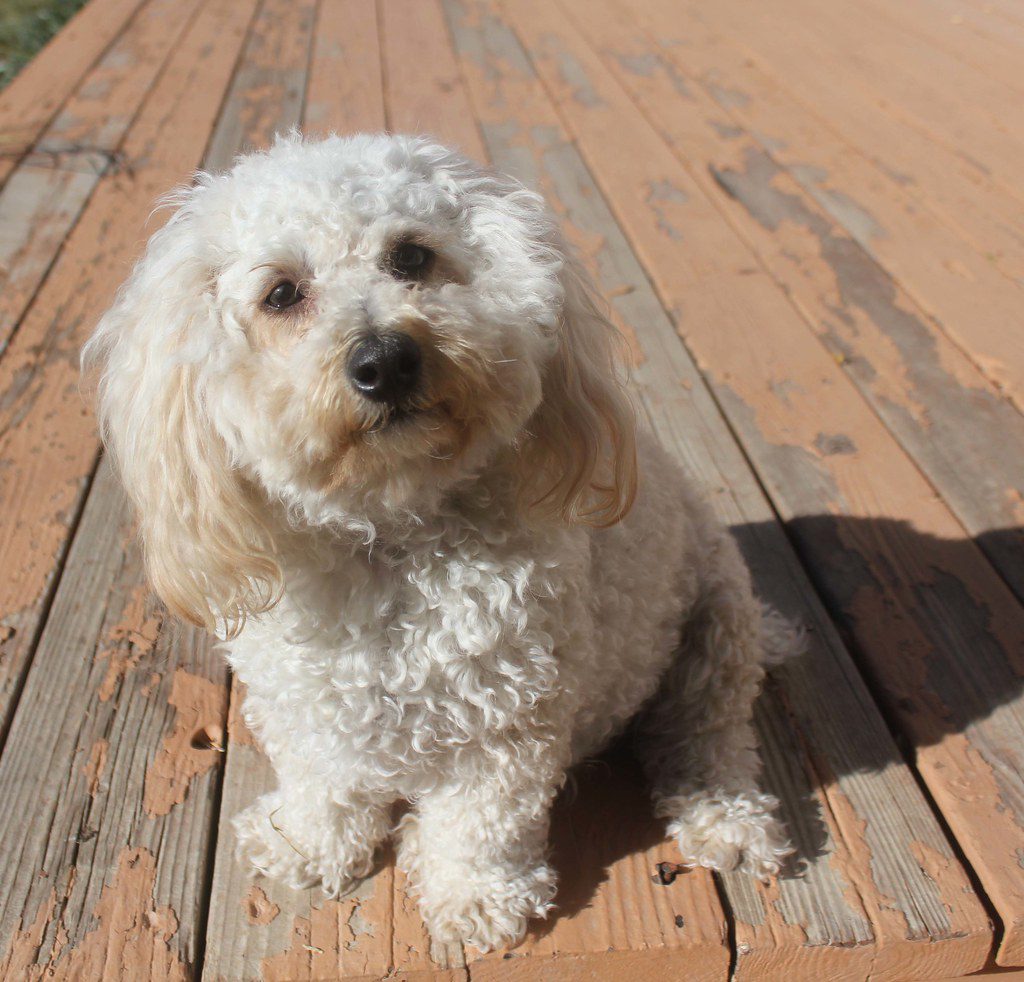 Can a Toy Poodle live in an apartment?

Toy Poodles are bred to be smaller so that more people can have a Poodle in their life. Because of their tiny size, a Toy Poodle is very adaptable and can live in many different places. They can live in a small apartment in the city, or they can live in a large house in the countryside. As long as you give them enough time for walking, playing and mental stimulation, they will love life with you wherever you live!

How much does a Toy Poodle cost?

A Toy Poodle can cost anywhere between between $1,000 to $2,000. They are actually one of the cheaper variations of the Poodle breed. However, they are selectively bred and their litter size is very small, so they are still quite an expensive dog.

If buying from a breeder is too expensive, you could always check your local shelter to see if there is a Toy Poodle who needs a loving family. It is important not to forget that there are thousands of dogs across the United States in shelters who all need a home.

The Toy Poodle is the smallest version of the Poodle breed and is a loving, caring, playful little dog who does well in many different environments. Although their grooming needs are high, they do not require too much exercise but will love to be with you and play games. Easy to train, a Toy Poodle is the perfect family dog that wants to run outside as much as they want to curl up next to you on the couch. Their adorable little size means you can take them anywhere with you and they’ll quickly become your new best friend. If you’re looking for a new companion, why not try a Toy Poodle?