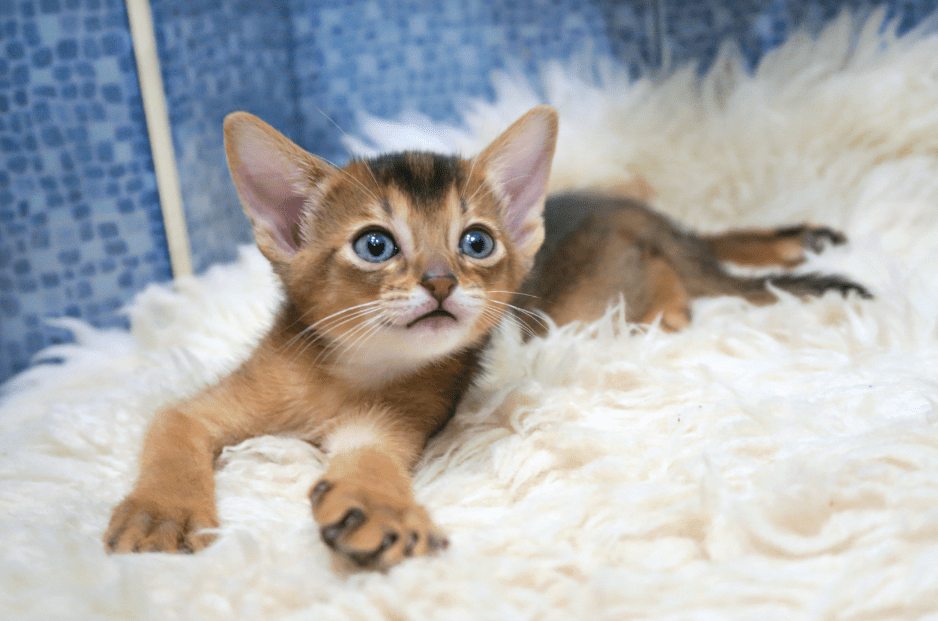 The Abyssinian is a natural breed of domesticated cat believed to originate from one Egyptian female kitten called Zula that was taken from a port in Alexandria, Egypt, by a British soldier and brought to England where the breed was developed by Zula being bred with an English tabby, and the most ‘Abyssinian’ looking kitten of her litter being bred with it’s mother to splice the Abby gene.

The Abyssinian has a distinctly ticked, tawny coat. The tail and paws may show tabby markings, but the body must not. It has large almond-shaped green or gold eyes with a fine dark line around them, and large ears. The coat is generally a warm golden colour, but “Abbys” can also be blue, fawn, cinnamon and red. There is also a Silver Abyssinian variant whose coat shows shades of white, cream and grey. 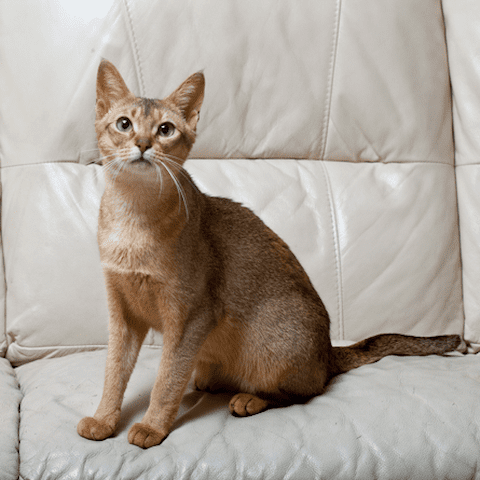 These cats are very active, friendly, curious and playful, but are usually not “lap cats”; they are too preoccupied exploring and playing; they are “busy” cats, and can get bored and depressed without daily activity and attention. Many Abyssinians enjoy heights, and will explore their surroundings in three dimensions, from the floor to their owner’s shoulders to the top of the highest furniture.

They are highly intelligent, and probably the most independent of any domestic breed. There is a long-haired version of the Abyssinian, called the Somali.

Abyssinians and Egyptian Maus do have something in common. They are both natural breeds of domesticated cats, and are believed to have originated from Egypt. Paintings and sculptures by ancient Egyptians portrayed the Abyssinian as a colorful, elegant cat, with a beautifully arched neck and muscular body. Today’s Abyssinian is remarkably similar to the Sacred Cat of Egypt.

However, recent discoveries indicate another possibility, that India may be the origin of the Abyssinian cat, so the legends which surround Abyssinian history are as colorful as the cat itself. The British did much to develop the cat that we know today. Abyssinians are one of the oldest recognized breeds, being accepted for showing in Britain in 1882. In 1909, the first Abyssinians were imported to the United States, and in 1917, the first Abyssinian was registered by an American association.

The breed was all but forgotten until 1934, when more Abyssinians were imported. California saw its first Abyssinians imported in 1949. By the 1990s the Abyssinian has become the most popular shorthair breed of cats in the United States.

A Pedigreed Show Cat Abyssinians are accepted by The Cat Fanciers Association (CFA – the largest and oldest pedigreed cat registry in the world) for championship competition in four colors: ruddy, red, blue and fawn. A ruddy Abyssinian has a brilliant orange-brown (burnt sienna) ground color with ticking of black or dark brown (ticking refers to a band, or bands, of color on the hair shaft). 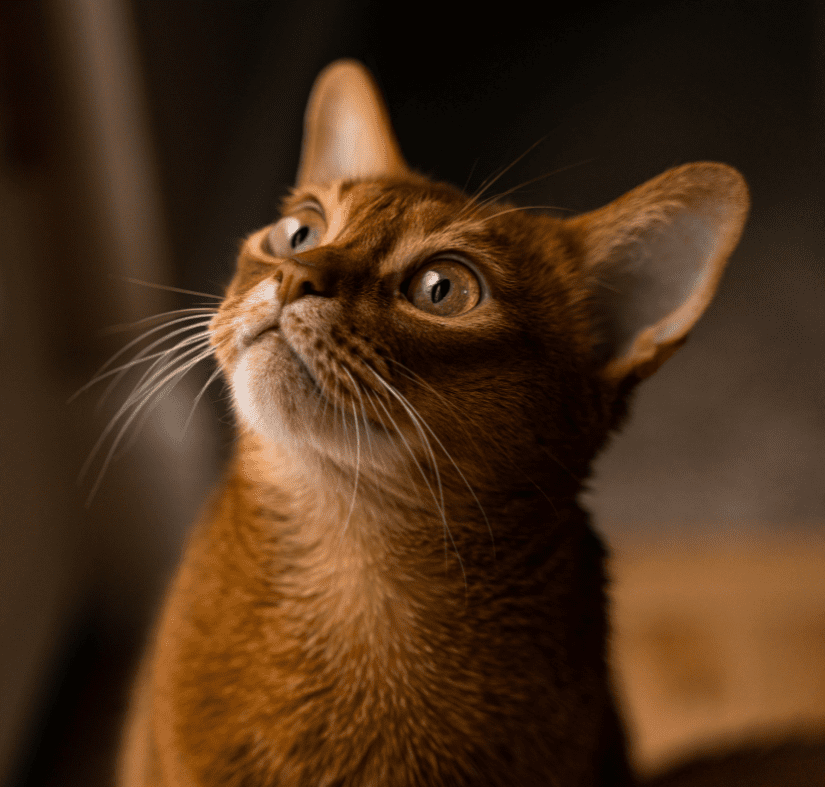 Physically, the Abyssinian is a medium-sized cat, tremendously powerful, yet lithe and graceful, and regal in bearing. Its moderately wedge-shaped head is framed with large, alert ears. The eyes are large and almond-shaped, in gold or green color. Striking tabby markings around the eyes accentuate the typical Abyssinian expression – at once sweet and wild.

The Abyssinian head sits on an elegantly arched neck which leads to a hard, muscular body. Its legs are slim and fine-boned, ending in small, oval, compact paws which give the impression that the cat is standing on tip-toes. The coat is silky, dense and resilient.

An Abyssinian is an interactive and intelligent cat, and is devoted to its family. It is playful, inventive, and in continuous motion (that is, always busy). Yet an Abyssinian is sensitive to its person’s every mood, and is an attentive and expressive companion, communicating with an unique, soft and musical voice, often barely audible.

Reputable Abyssinian breeders today work diligently to preserve these traits which make the Abyssinian cat so distinctive both in appearance, and as a companion animal. Great care has also been undertaken by such breeders to maintain successfully the robustness and longevity of this breed.