The appearance of the Afghan Hound are an aristocrat, dignity and aloofness with no coarseness. Afghan Hound’s striking characteristics are their exotic expression, long silky topknot, peculiar coat pattern and prominent hip bones. Afghan Hound’s elegance makes them a glamorous popular show dog. 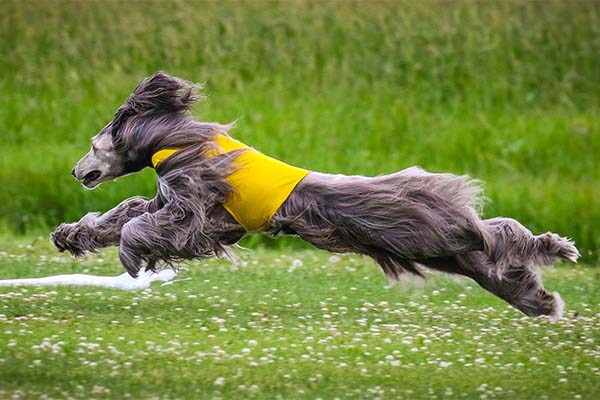 Despite their glamorous reputations, Afghan Hound’s are a hunter at heart, bred to chase down game over rugged terrain. There is also a side of Afghan Hound’s which is an arrogant mischievous companion. Afghan Hound’s also has been recently utilized in the sport of Afghan racing.

The Afghan Hound is one of the oldest breeds, dating back thousands of years. The Afghan Hound is a member of the Greyhound family. Their ancestors are originally from Persia moving to Afghanistan where they worked protecting sheep and cattle. Afghan Hound’s were once a harsh hunter in their native land where they were used to hunt leopard, wolves and jackals. They have now been breed to be an obedient, gentle dog. The Afghan Hound was introduced into Western civilization late in the nineteenth century. Much credit to the breed is given to Major Amps and his wife Mary who while living in Ghazni, Afghanistan established their kennel “Ghazni”. Mary also did much research and writing on the breed. Their hounds are found in most American Afghan Hound pedigrees.

Colors of the Afghan Hound: All colors.
Coat: Long and fine.

Temperament: An Afghan Hound is reserved, lively, active
With Children: Yes, an Afghan Hound will but they are better with families with older children.
With Pets: Afghan Hound’s may chase small animals such as cats unless they have been raised with them.
Special Skills: Afghan Hound are hunters by sight of large and small wild game, also watchdog, racing dog and a companion dog.