You are here: Home / Animals / Sheep 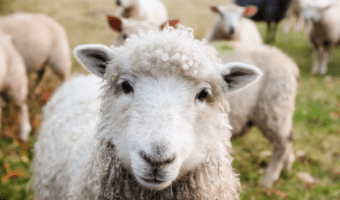 Domestic sheep (Ovis aries) are quadrupedal, ruminant mammals kept as livestock. Like all ruminants, sheep are even-toed ungulates, also commonly called cloven-hoofed animals. Although the name ‘sheep’ applies to many species, in everyday usage it almost always refers to Ovis aries. Domestic sheep are the most numerous species in their genus and are most likely descended from the wild mouflon of Europe and Asia. Today, there are about one billion sheep on the planet and around 900 different breeds, many of these sub-classable.

Different breeds of sheep are bred for particular purposes such as wool and meat. Others are bred for their different types of milk. Some breeds produce thicker milk which is ideal for making ice cream.

Sheep are also kept as pets. Sheep are docile animals, timid and sometimes, plain stupid! However, they are very interesting animals that make wonderful pets for people all over the world. Sheep require different care and housing than usual pets, however, they still need the same love and attention. 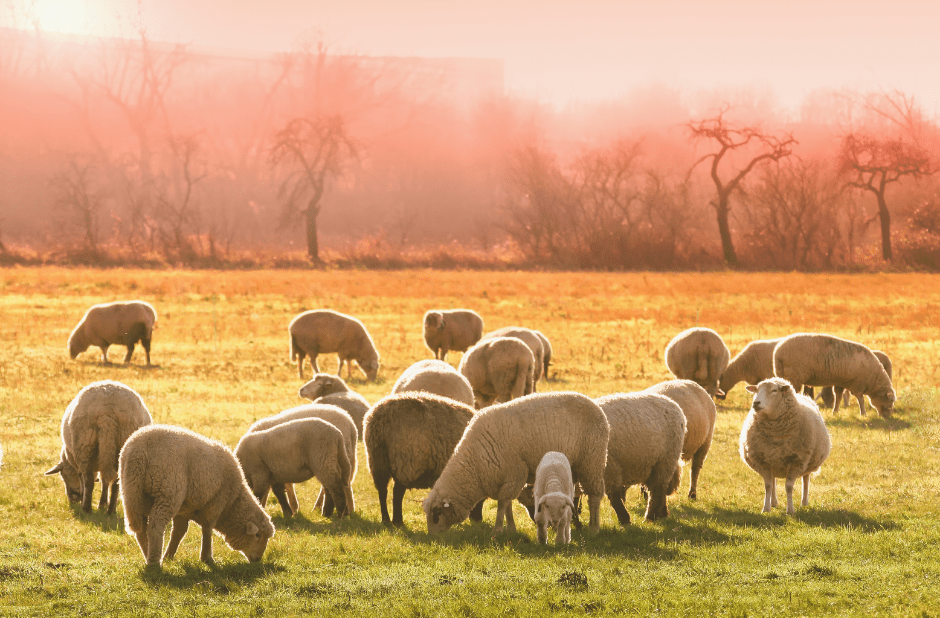 Domestic sheep are relatively small ruminants, typically with horns forming a lateral spiral and crimped hair called wool. A sheep is an animal which has a thick coat of fleece on its body. Another trait unique to sheep are their wide variation in color. Wild sheep are largely variations of brown hues. Colours of domestic sheep range from pure white to dark chocolate brown and even spotted or piebald. Selection for easily dyeable white fleeces began early in sheep domestication and as white wool is a dominant trait it spread quickly. However, colored sheep do appear in many modern breeds and may even appear as a recessive trait in white flocks.

Depending on breed, sheep show a range of heights and weights. Their rate of growth and mature weight is often selected for in breeding. Ewes typically weigh between 100 and 225 pounds (45 – 100 kg), with the larger rams between 100 and 350 pounds (45 – 160 kg). Mature sheep have 32 teeth. As with other ruminants, the eight incisors are in the lower jaw and bite against a hard, toothless pad in the upper jaw, picking off vegetation.

Sheep have no canines, instead there is a large gap instead between the incisors and the premolars. Until the age of four (when all the adult teeth have erupted), it is possible to see the age of sheep from their front teeth, as a pair of incisors erupts each year.

The front teeth are gradually lost as sheep age, making it harder for them to feed and hindering the health and productivity of the animal. For this reason, domestic sheep on normal pasture begin to slowly decline from four years on and the average life expectancy of a sheep is 10 to 12 years, though some sheep may live as long as 20 years. Sheep have good hearing and are sensitive to noise when being handled. Sheep have horizontal slit-shaped pupils, possessing excellent peripheral vision.

Domestic Sheep also have an excellent sense of smell and like all species of their genus, have scent glands just in front of the eyes and interdigitally on the feet. The purpose of these glands is uncertain, however, those on the face may be used in breeding behaviours. The interdigital glands might also be used in reproduction, however, alternative reasons, such as secretion of a waste product or a scent marker to help lost sheep find their flock, have also been proposed.

The sheep should not be confused with the goat. Sheep are different in many ways. Visual differences between sheep and goats include the beard and divided upper lip unique to goats. Sheep tails also hang down, even when short or docked, while the tails of goats are held upwards. Sheep breeds are also often naturally polled (either in both sexes or just in the female), while naturally polled goats are rare (though many are polled artificially). Males of the two species differ in that buck goats acquire a unique and strong odour during the rut, whereas rams do not. 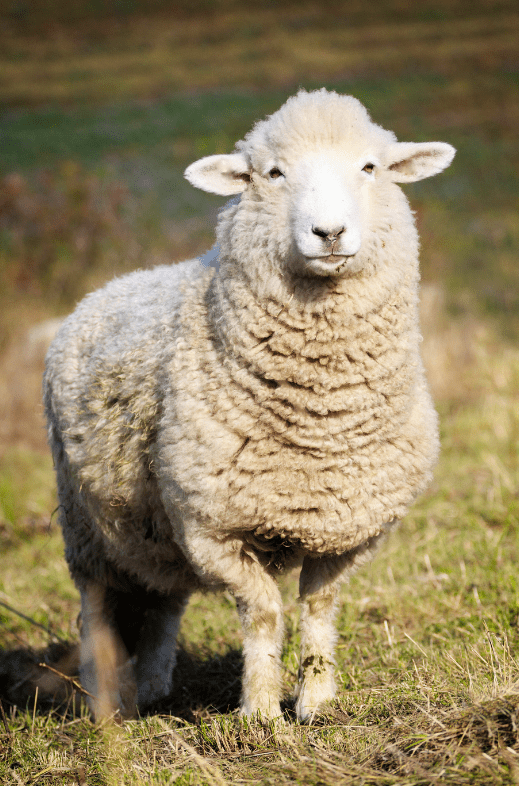 Domestic Sheep exhibit a strong flocking behaviour. Sheep do not like to be alone, that is why the flock together in large or small groups.

In a flock of grazing sheep there is little or no sign of dominance. In small domestic flocks, sheep will compete for small amounts of food by pushing and shoving rather than active bunting. Flocking behaviour is an advantage to non-predatory animals. The strongest animals fight their way to the centre of the flock which offers them greater protection from predators. It can also be a disadvantage when food sources are limited and sheep are almost as prone to overgrazing a pasture as goats.

Flocking behaviours in English breeds of sheep can be prevalent. Because these behaviours are very noticeable, sheep breeders have even given them names. A sheep that roams away from the flock is called an ‘Outlier’. This sheep will venture away from the safety of the flock to graze elsewhere. This is probably because it has a weakness that prevents it from gaining enough forage when with the other sheep.

Another sheep, the ‘Bellwether’, leads the others. Traditionally this was a castrated Ram (or wether) with a bell hung off a string around its neck. The tendency to act as an outlier, bellwether or to fight for the middle of the flock stays with sheep throughout their adulthood.

Grazing is a social behaviour like sheltering and camping. Domestic Sheep tend to have two main grazing periods, during the early morning and again late in the afternoon. The early morning grazing time tends to be a lesser active grazing time than the later period. Grazing time in total can last from 5 – 10 hours per day depending on breed of sheep and available pasture and water.

Sheep are exclusively herbivorous mammals. Like all ruminants, sheep have a complex digestive system composed of four chambers, allowing them to break down cellulose from stems, leaves and seed hulls into simpler carbohydrates. When sheep graze, vegetation is chewed into a mass called a bolus, which is then passed into the first chamber: the rumen.

The bolus is periodically regurgitated back to the mouth as cud for additional chewing and salivation. Cud chewing is an adaptation allowing ruminants to graze more quickly in the morning and then fully chew and digest feed later in the day. This is beneficial as grazing, which requires lowering the head, leaves sheep vulnerable to predators, while cud chewing does not.

During fermentation, the rumen produces gas that must be expelled. After fermentation in the rumen, food passes in to the reticulum and the omasum, special feeds such as grains may bypass the rumen altogether. Following the first three chambers, food moves in to the abomasum for final digestion before processing by the intestines. The abomasum is the only one of the three chambers analogous to the human stomach (being the only one that absorbs nutrients for use as energy) and is sometimes called the ‘true stomach’.

Sheep need plenty of water, they also prefer to drink from running water such as brooks and streams rather than still sources. Sheep also require clean water and may refuse to drink water that is covered in scum or algae.

Different breeds of sheep are bred specifically for the type of wool and milk they produce as well as being a valuable source of meat.

Spinning wool into yarn began about 5,000 years ago. One pound of wool can make 10 miles of yarn. One years growth of fleece, makes around 8 pounds of wool. Fleeces of British sheep can be classified into three main types: carpet wools, down wools and long wools each with differing end uses.

Domestic Sheep are either sheared in the early summer months, or immediately prior to winter housing. Since sheep breeds no longer naturally molt, shearing is necessary to prevent the animal from overheating either when indoors, or outside during hot summer months. When shorn, sheep are also much less prone to fly strike.

Shearing is usually carried out by shearers from Australia and New Zealand who travel the world to shear sheep all year round. This ‘shearing circuit’ is seen as a way to save money to start farming. Once a sheep has been shorn, the fleece is rolled up and tied with its own wool. It is then put into wool sacks and then collected. It is then cleaned, dyed, combed and spun into yarn in which clothes and carpets are made from it. The sheep are then nice a cool in the summer and their fleece can begin to freshly grow again.

The milk that sheep produce is both nutritious and delicious. The milk has a rich, bland, slightly sweet taste. It is much higher in total solids than either cow or goat milk and contains up to twice as many of the minerals like calcium, phosphorus and zinc and the all important B group Vitamins. It is sold both fresh and frozen in pint or 500ml packs and keeps well for at least 4 months in a deep freeze.

Below is a comparative analysis of sheep, goat and cows milk:

Even if people are severely lactose intolerant, the lactose will have been converted into lactic acid if they take their sheep milk in the form of yogurt and much of the lactose goes out with the whey in hard cheese making. There is also evidence that the lactose in sheep milk is more tolerated than from other milk and certainly worth a try.

One more thing you may not know, is that the fat from domestic sheep is called ‘Tallow’. It is cooked and purified and is used to make candles or further prepared and made into blocks of soap!

Sheep are quite intelligent creatures and have more brainpower than people are willing to give them credit for. For example, sheep in Yorkshire, England found a way to get over cattle grids by rolling on their backs. Clever sheep!

A study published in National Geographic magazine showed that a sheep can remember the faces of fifty other sheep for over two years. Amazing!

However, if you ever come across a sheep on its back, give it a hand and get it up on its feet. Sheep cannot get themselves back upright from that position and if left for too long it will unfortunately, eventually die!

Sheep follow a similar reproductive strategy to other herd animals. A flock of ewes is generally mated by a single ram, who has either been chosen by a farmer or has established dominance through physical contest with other rams (in feral populations). Most sheep are seasonal breeders, although some are able to breed year round.

Sheep do not like to be enclosed in a tight environment and will move on their own accord into larger areas.Sheep move toward other sheep willingly.Sheep have no upper incisors, they only have lower teeth that press against an upper palette.Sheep have good long-term memory (relative) especially with respect to unpleasant experiences.A one year old sheep is called a 'Hogget', a two year old sheep is called a 'Two-tooth'.Sheep have poor eye sight but they have an excellent sense of hearing.Sheep baa in many different tones, pitches and ways. Some sheep will baa so as to almost say 'moo', while others will be more 'whiny'.Not only do cows eat their own afterbirth but sheep do too.The sheep industry began in central Asia over 10,000 years ago. Spinning started in 3500 B.C.In biblical times, wool was left outside at night to absorb the dew and wrung out in the morning.The wool from sheep is often used to make sweaters, hats, socks, scarves and other types of clothing. Sheep's wool may also be stuffed inside quilts and comforters.