You are here: Home / Animals / Meerkat 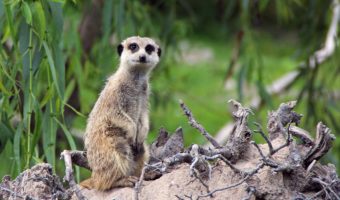 The Meerkat (suricate Suricata suricatta) is also called a ‘Suricate’. The Meerkat is a small member of the mongoose family whose range extends from South West Angola to South Africa. A group of meerkats is called a ‘mob’, but also referred to as a ‘gang’ or a ‘clan’. Meerkats are well known for their upright position and sociable behaviour.

Meerkats measure about 25 – 35 centimetres (10 – 14 inches) in length excluding their tail. The length of their tail measures 17 – 25 centimetres (7 – 10 inches) and is not bushy like other mongoose species.

Their tail is long and slender and tapers to a black or reddish colored pointed tip.

Meerkats are more slender than many mongoose and have pointed snouts. Their fur is silvery brown and they have irregular dark stripes on their rumps which are unique to each meerkat.

The underside of the meerkat has no markings but the belly has a patch which is only sparsely covered with hair and shows the black skin underneath. The meerkat uses this area to absorb heat while standing on its rear legs, usually early in the morning after cold desert nights.

Their faces are white with dark markings around their eyes (which helps deflects the suns glare). Their ears are crescent shaped and can close when digging in order to keep sand out of them. Unlike most mongoose, meerkats have 5 instead of 4 toes on each paw.

Their eyes are situated on the front of their faces and, like cats, they have binocular vision, a large peripheral range and depth perception (although they seem to have a problem with this, not being able to focus within 20 feet (6 metres) of themselves).

Meerkats have strong, non-retractable claws that measure 2 centimetres (0.8 inches) long. These claws are curved and used for digging underground burrows and digging for prey. Their claws are also used in conjunction with their muscular hind legs to occasionally climb trees.

Meerkats inhabit dry open areas, scrublands and savannas. They inhabit all parts of the Kalahari Desert in Botswana and South Africa. They usually live in places where there is plenty of sandy soil where they can dig elaborate underground burrows. These complex habitats have many tunnels which lead to numerous sleeping chambers.

Meerkats are diurnal animals and only forage during the day. Like all mongoose, they are agile little hunters. Their main diet consists of insects and particularly beetles, spiders and millipedes. They sometimes feed up on small vertebrates, eggs and roots.

Meerkats are social animals that live in colonies of 5 – 30 individuals. Being sociable creatures, they share both toilet and parental care responsibilities. Each mob has a dominate alpha male and dominate alpha female.

Each mob has its own territory which they sometimes move if food is scarce or when forced out by a stronger mob. If the latter occurs, the weaker mob will then try to expand in another direction or wait until they become stronger and reclaim their lost burrow.

Each mob also has what is called a ‘sentry’ who watches over the mob and is there to spot danger and warn the other members when threats are posed. The sentry either watches from the ground or climbs a tree or bush to look out.

The sentry watches over both the burrow system as well as when the other members of the mob are foraging for food. The sentry will give out a loud bark when danger is perceived and the mob will then bolt quickly to their hiding holes.

Meerkats like to groom each other and will remove parasites from a grooming partner which are eaten, although these are not part of their normal diet.

Meerkats typically stand on their hind legs or even their toes to sniff the wind to detect attacking vultures. They have excellent vision and are capable of 10 different vocalisations including an alarm bark. They are intelligent animals that are not endangered and thrive in their environment.

Female meerkats give birth to 2 – 4 young after a gestation period of 11 weeks. Young meerkats are usually born in autumn or early winter. Both female and male care for, groom and guard and protect their young.

Young meerkats are born with hair but not full coats and with their eyes closed. When the young are 4 – 6 weeks old, they begin to forage the their parents to obtain nourishment from both milk from their mother and insects. At 6 – 16 weeks, the young are weaned and find their own food.

During this time, an adult meerkat will take responsibility of a pup and teach it to forage and be alert to danger. Meerkats reach sexual maturity at 10 months and adulthood at 11 months. Meerkats may stay with their original mob before venturing out on the own. Some meerkats leave in groups of 3 – 4 individuals for safety, when starting their own mob. The life span of a meerkat is 12 – 14 years.

Meerkats are classed as ‘Least Concern’ by the IUCN. Because meerkats carry rabies, they have been hunted and even gassed in their burrows particularly in areas where they pose a threat the humans. However, this has not reduced their numbers significantly.

Meerkats are prey to jackals, eagles, vultures and falcons. In South Africa, these affectionate and timid little animals are kept as pets.

Meerkats are immune to venom from animals such as scorpions and snakes.According to African popular belief (mainly in the Zambian/Zimbabwean region), the meerkat is also known as the sun angel, as it protects villages from the moon devil or the werewolf which is believed to attack stray cattle or lone tribesmen.Meerkats do not like the rain and will stay in their burrow and refrain from foraging for food until the rain stops.Meerkats can dig as much dirt as their own body weight in a couple seconds.