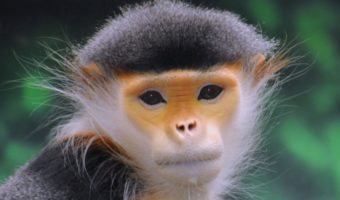 Old World Monkeys are a group of primates which belong to the super family Cercopithecoidea.

Old World monkeys are unlike apes in that most have tails (the family name means ‘tailed ape’), and unlike the New World monkeys their tails are never prehensile.

Some species of Old World monkeys inhabit tropical rainforests, while others live on arid grasslands and even mountainous areas with heavy winter snows. 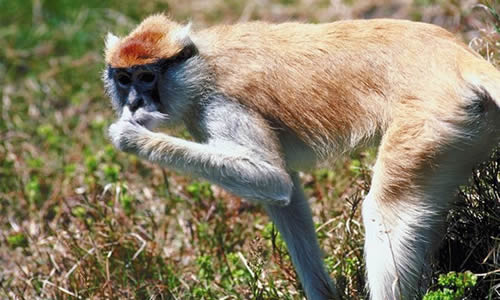 There are at least 78 species of Old World monkeys in two subfamilies, the Cercopithecinae which is mainly African species, however, this subfamily includes the diverse genus of macaques which are Asian and North African. The Colobinae which is the second subfamily includes most of the Asian genera and also the African colobus monkeys. Monkeys in both groups are relatively large, being about the size of small to medium-size dogs.

Several of the Old World monkeys have distinct prominent features such as facial structures and colorings of certain parts of their anatomy. For instance, the Colobus monkey has a stub for a thumb, the Proboscis monkey has a very strange nose and the Snub-nosed monkey has no nose at all. A Mandrill has a red penis and a lilac colored scrotum and the dominant male of an all-male group has a brightly colored face. All of these small but distinctive features define their individuality.

The Old World monkeys are native to Africa and Asia today, however, they are also known to have been present in Europe from fossil records. They include many of the most familiar species of non-human primates.

Most Old World monkeys are at least partially omnivorous, but all prefer plant matter, which forms the bulk of their diet. Leaf monkeys are the most vegetarian, existing primarily on leaves and eating only a small amount of insects, while the other species exist primarily eating fruit, however, they will also consume almost any food items available, such as flowers, leaves, bulbs and rhizomes, insects, snails and even small vertebrates.

The female monkey gestation period in the Old World monkeys lasts between five and seven months. Births are usually single, although, as with humans, twin births do also occur from time to time. The young are born relatively well developed and are able to cling onto their mothers fur with their hands from birth. Compared with most other mammals, they take a long time to reach sexual maturity, with four to six years being typical of most species.

In most species, daughters remain with their mothers for life, so that the basic social group among Old World monkeys is a matrilineal troop (a system in which one belongs to ones mothers lineage). Males leave the group on reaching adolescence, and find a new troop to join. In many species, only a single adult male lives with each group, driving off all rivals, however, others are more tolerant, establishing hierarchical relationships between dominant and subordinate males. Group sizes are highly variable, even within species, depending on the availability of food and other resources.

The approximate range for Old World monkeys covers Africa, central to southern Asia, India and Japan. Take a look at the range map below: 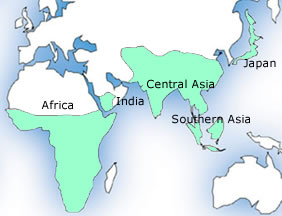