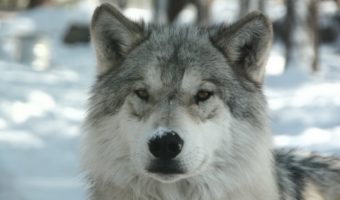 The Arctic Wolf (Canis lupus arctos), also called Polar Wolf or White Wolf, is a mammal of the Canidae family and a subspecies of the Grey Wolf.

Arctic Wolves inhabit the Canadian Arctic and the northern parts of Greenland. The Arctic Wolf and the Timber Wolf are the only subspecies of the Grey Wolf that still can be found over the whole of its original range, largely because in their natural habitat they rarely encounter humans.

Arctic Wolves generally are smaller than Grey Wolves, measuring around 3 to 6 feet (0.9 to 1.8 metres) long including the tail. Male Arctic Wolves are larger than female Arctic Wolves. Their shoulder heights vary from 25 to 31 inches (63 to 79 centimetres).

Arctic Wolves are bulkier than Grey Wolves, often weighing over 100 pounds (45 kilograms). Weights of up to 175 pounds (80 kilograms) have been observed in full-grown males.

Arctic Wolves usually have small ears, which help the wolf maintain body heat. The alpha male is always the largest and will continue growing after other wolves had stopped. Arctic wolves can be black, grey or white.

Arctic wolves, like all wolves, hunt in packs. They mostly prey on Caribou and musk oxen, however, they will also kill a number of Arctic Hares, seals, ptarmigan and lemmings, as well as other smaller animals. Moose are also common prey, their long legs may render them slow and at times, stuck, in thick snow, leaving them vulnerable to attacks by wolf packs.

As grazing plants are scarce, they roam large areas to find prey up to and beyond 2600 kilometres squared (1000 square miles) and they will follow migrating caribou during the winter.

Normally, only the alpha male and female Arctic wolves breed, however, in large packs others may mate as well. Due to the Arctics permafrost soil and the difficulty it poses for digging dens, Arctic Wolves often use rock outcroppings, caves or even shallow depressions as dens instead.

The mother gives birth to 2 or 3 pups in late May to early June, about a month later than Grey Wolves. It is generally thought that the lower number of pups compared to the average of 4 to 5 among Grey Wolves is due to the lack of prey in the Arctic. Female Arctic wolves have a gestation period of about 63 days. The wolf pups stay with their mother for 2 years.

At birth, wolf pups tend to have darker fur and their eyes have blue irises that will change to a yellow-gold or orange color when the pups are between 8 and 16 weeks old. Though extremely unusual, it is possible for an adult wolf to retain its blue-colored irises.

Arctic Wolves have achieved life spans of over 18 years in captivity; however, in the wild, the average life span is only 7 – 10 years.

The Arctic Wolf is classed as ‘Least Concern’. The White Wolf Sanctuary is a refuge for Arctic wolves located in Tidewater, Oregon. The average population of wolves in the sanctuary is 8 – 10 over 40 acres, of which some are rescued wolves who were injured, unwanted or abandoned.