All three species are native to the Rainforests of America, ranging from Mexico to Brazil, Chile, and Argentina.

Vampire bats very rarely bite people because they apparently dislike human blood. The three species of Bats are quite different from each other and are therefore placed within different genera (no other species are currently classified in any of the three genera concerned). But they are related.

Vampire bats have burnt amber coloured fur on their backside while soft and velvety light brown fur that covers their belly. Vampire bats have a wingspan of about 8 inches and a body about the size of an adults thumb. 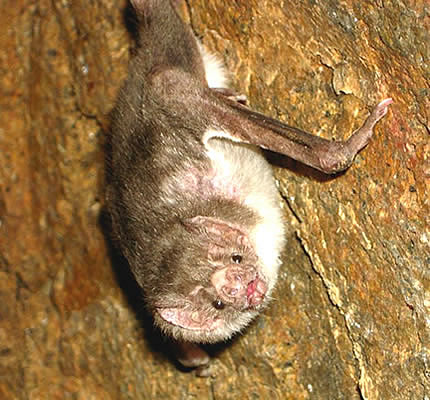 Unlike fruit-eating bats, the vampire bats have a short, conical muzzle without a nose leaf. Instead they have naked pads with U-shaped grooves at the tip. The common vampire bat also has specialised infrared sensors on its nose, by which it perceives temperature. A nucleus has been found in the brain of vampire bats that has a similar position and has similar histology to the infrared nucleus of infrared sensitive snakes.

Vampire bats have small ears and a short tail membrane. Their front teeth are specialised for cutting and their back teeth are much smaller than in other bats. Their digestive systems are also specialised for their liquid diet. The saliva of vampire bats contains the substance, ‘draculin’, which prevents the victims blood from clotting. Vampire bats therefore, lap blood rather than suck it as most people imagine.

Using their sharp teeth, the bats make tiny cuts in the skin of a sleeping animal. The bats’ saliva contains a chemical that keeps the blood from clotting. The bats then lap up the blood that oozes from the wound. Another chemical in their saliva numbs the animal’s skin and keeps them from waking up.

Vampire bats do not kill their prey. They only take about a teaspoon or two of blood at a feeding. Since bats rarely carry rabies, there is little chance their victims will die from that disease. However, it has been said that some do carry the disease and it is not the blood-sucking that kills the victim, but the transfer of the rabies. I guess it depends upon species and whether that species has contracted the disease.

When the bats have finished their meal, they are often so engorged with blood that they are too heavy to fly, so they have to retire in a place away from the victims to digest their meal before taking flight.

A vampire bat finds its prey with echolocation (use of ultra-high frequency sounds for navigation), smell, and sound. They fly about one metre above the ground. Then they use special heat sensors in their noses to find veins that are close to the skin.

Once the common vampire bat locates a host, usually a sleeping mammal, they land and approach it on the ground. A recent study found that common vampire bats can, in addition to walking, run at speeds of up to 1.2 metres per second. Vampire bats locate a suitable place to bite their victims using their infrared sensors.

The feeding pattern of the vampire bat adds a layer of complexity to its anatomy. Because they often do not find host organisms for many hours and may have to fly a long distance to do so, vampire bats usually feed in enormous quantities. This influx of proteins can however make the bat too heavy to fly. Vampire bats have so much stealth that they can drink for 30 minutes without awakening the animal. If vampire bats do not get blood for two days, they will eventually die, but that is less likely to happen. Female bats are generous and will give their blood to other bats who lack food.

Apparently, the bats urinary system accommodates this by releasing dilute urine consisting of a lot of water and fewer solutes. However, when the bat is resting, a new problem is faced. The large amounts of protein create excess urea and must be disposed of. The urinary system of the vampire bat then uses various hormones to make concentrated urine which consists of more urea and less water.

Vampire bats tend to live in almost completely dark places, such as caves, old wells, hollow trees and buildings. Colonies can range from a single individual to thousands. Vampire bats often roost with other species of bat.

Common vampire bats will almost always have only one offspring per breeding season. Each colony will typically contain only one reproducing male, with around twenty females and their offspring. Vampire bats need blood at least once every few days to survive. If they cannot get blood, they will approach another vampire bat whilst roosting, asking for a blood ‘transfusion’. The blood is exchanged mouth-to-mouth in a motion that looks very much like kissing. Their babies use tiny thumbs in the middle of the wing to cling on the mothers furry belly.

Vampire bats can live up to 9 years in the wild and up to 19 in captivity.

Vampire bats are not an endangered species and have a conservation status of being ‘Least Concern’.

Myths and legends from all over the world portray bats as blood-sucking demons.

IT’S TRUE! Not really, here are some facts:

Bats are not blind. Most bats can see as well as humans. Fruit bats have eyesight that is adapted to low-light, much like cats. Fruit bats also see in color.

Vampires have not always been associated with bats, although both were considered mysterious and somewhat supernatural. Bram Stroker’s “Dracula” was the first known connection. Stoker had seen a newspaper article on the bats and decided to include it in his book.

Bats are not flying mice. They are not even remotely related to rodents. Bats are such unique animals that scientists have placed them in a group all their own, called ‘Chiroptera’, which means hand-wing. Bats are grouped with primates and lemurs in an order called Archonta.

Bats are shy, gentle, and intelligent and they are among the slowest reproducing animals on earth.

Vampire Bats are the only known mammals that exist entirely on a diet of blood. Their preferred prey are lareg birds, horses, cows and pigs.

Perhaps as a result of being so misunderstood, Vampire Bats and many other bat species are at risk of extinction.

Fears about vampire bats are fueled by a lot of misconceptions. A common one is that the bats bite the throats of their human victims. This is very far from the truth!