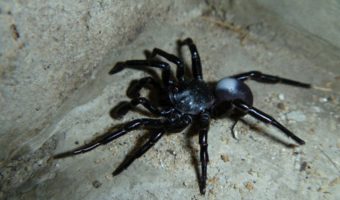 Trapdoor Spiders are a medium-sized mygalomorph (an infraorder of spiders), spiders that construct burrows with a cork-like trapdoor made of soil, vegetation and silk.

The Trapdoor Spider is a common name for any of several large, hairy, harmless tropical spiders that nest underground.

Trapdoor spiders make up the family Ctenizidae of the order Araneae. The species is common in the southwestern United States. Trapdoor spiders are often kept as exotic pets, however, Trapdoor Spiders are very aggressive and should only be kept by experienced people. 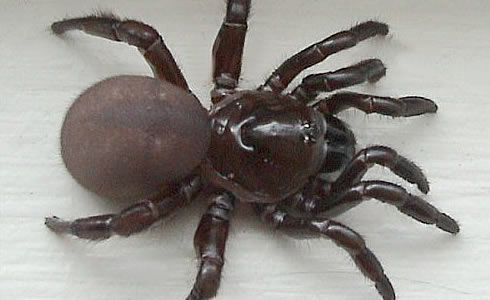 They have powerful jaws and sharp fangs, that stab downwards into its prey. Trapdoor spiders have 8 legs that are thick and short, 2 fangs and 2 body parts which are the abdomen and the thorax.

Trapdoor spiders are usually stocky spiders in appearance. Their bodies are thinly covered with hairs. A Trapdoor spider can run very fast.

A Trapdoor spider does not have a web like other spiders do. It has a trapdoor on top of a burrow. A Trapdoor spiders burrow is around 30 centimetres deep and 5 centimetres across. Sometimes they like to make their burrows beside creeks or rivers so they can catch little fish.

The trapdoor that these spiders construct is difficult to see when it is closed because of the plant and soil materials that effectively camouflage it. The trapdoor is hinged on one side with silk.

The spiders, who are usually nocturnal, typically wait for prey while holding onto the underside of the door with the claws on their tarsi (the cluster of bones in the foot between the tibia and fibula and the metatarsus).

Prey is captured when insects or other arthropods venture too close to the half-open trapdoor at night. The spider detects the prey by vibrations and when it comes close enough, the spider jumps out of its burrow and captures it. Female Trapdoor spiders never travel far from their burrows.

A Trapdoor spiders enemies include wasps, scorpions and people. If a wasp finds the burrow it will quickly run into the spiders burrow and sting the spider. The only way to save itself is for the spider to hold the door with its fangs.

The wasp usually wins, because it cuts the lid of the burrow with its sharp fangs. When they have stung the spider the wasps lay their eggs (usually one per spider) on its body. Other predators of Trapdoor Spiders can include birds, bandicoots, centipedes, scorpions, parasitic wasps and flies.

Brown Trapdoor spider burrows are open (without a trapdoor). Often they are found scattered over lawns.

They can be distinguished from Funnel-web spider burrows by the absence of silk trip lines around the entrance. Sigillate Trapdoor spider burrows are made with soil or litter trapdoors.

Mature male Trapdoor Spiders wander during humid weather in search of a mate. Mating takes place within the females burrow. The male usually escapes being eaten in order to mate with several females, before dying.

The female Trapdoor spider will lay her eggs several months after mating and protects them within her burrow. When the spiderlings have hatched, they remain for several months before dispersing on the ground. They will then make their own miniature burrows.

Each time the spider grows bigger, it has to widen its burrow and in the door-building species, add another rim to the door. In undamaged trapdoors, yearly concentric (having a common centre, as circles or spheres) rings can be seen.

Trapdoor Spiders have a long life span, between 5 to 20 years and take several years to reach maturity. Female Trapdoor spiders stay in or near their burrows, whereas males leave their burrows once mature and go in search of a mate.

The bite of the Trapdoor Spider is of low risk (non toxic) to humans. It is a non-aggressive spider and is usually timid, however it may stand up and present its fangs if harassed. Trapdoor Spiders rarely bite, however, if they do so, it can be very painful.