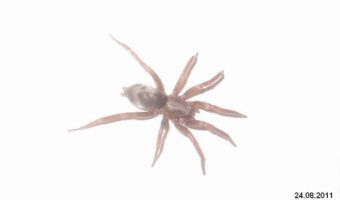 Mouse Spiders are spiders of the genus Missulena. There are 11 known species in this genus, all but one of which are widespread across mainland Australia. Mouse Spiders can be found in both coastal and drier habitats, however, they do not occur in tropical rainforests. One species, Missulena tussulena, is found in Chile.

Mouse Spiders are a kind of Trapdoor spider and sometimes mistaken for Funnel Web spiders. 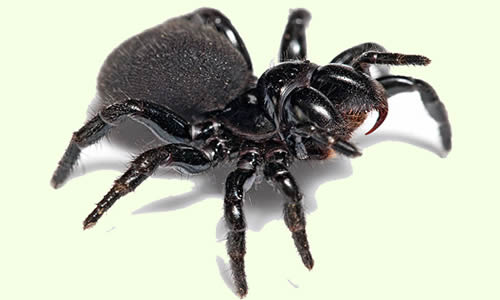 Male Mouse Spiders have longer legs and long palps (an elongated, often segmented appendage usually found near the mouth in invertebrates used for sensation, locomotion, and feeding) which look like an extra pair of legs. Mouse Spiders are either black or brown in color with short, stocky, thick legs. Their carapace is glossy and they have high, broad heads, with eyes spread out across the front of the head.

Mouse spiders are part of the Gondwanaland fauna (southern super continent) this is because most are residents of Australia, although one species is found in Chile and another near relative is found in South America.

Mouse spiders live in burrows in soil covered with a hinged top known as the trapdoor. Mouse spider burrows can extend to the depth of 30 centimetres (12 inches). The burrow provides a refuge from predators, parasites, low humidity and high temperatures. Male Mouse spiders will often wander from the burrow in search of mates, however, the females will remain inside the burrows spending most of her life in there unless accidentally dug up.

Mouse spiders prey mainly on insects though they may consume other small animals as opportunity presents. Mouse spiders feed by lunging at prey passing the burrow entrance. The primary predators of the mouse spider include wasps, bandicoots, centipedes and scorpions.

Both male and female Mouse spiders have very large fangs and fang bases. Mouse spiders are aggressive spiders and will bite if provoked. However, only several of the species have been found to produce serious symptoms similar to those by the Funnel Web spider. Unlike the funnel-web, however, the mouse spider is far less aggressive towards humans (unless provoked) and may often give ‘dry’ bites.

Males reach sexual maturity at about 4 years. Mouse spiders leave their shallow burrows during the breeding season to find a mate. They are unusual in that their wandering behaviour occurs during the day, unlike other mygalomorph spiders, whose males are night wanderers. Mating usually takes place within the females burrow. The female Mouse spider lays 60 or more eggs within an egg sac that she places into a brood chamber off the main shaft of her burrow. The spiderlings hatch from the egg sac over summer and remain with the mother into autumn when dispersal occurs.