You are here: Home / Animals / Cows 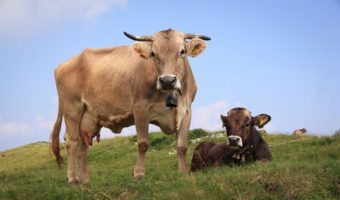 Cows are members of the sub-family ‘Bovinae’ of the family ‘Bovidae‘. This family also includes Gazelles, Buffalo, Bison, Antelopes, Sheep and Goats.

Cows are raised for many reasons including: milk, cheese, other dairy products, also for meat such as beef and veal and materials such as leather hide. In older times they were used as work animals to pull carts and to plow fields.

In some countries such as India, cows were classed as sacred animals and were used in religious ceremonies and treated with much respect.

Today, cows are domesticated ungulates (hoofed animals with two toes on each hoof) that we see very often chewing the grass in farmers fields as we walk or drive through the countryside.

There is an estimated 1.3 billion head of cattle and 920 breeds of cow in the world today. Cows are referred to as the ‘fosters mothers to the human race’ because they produce most of the milk that people drink.

A cow spends up to 6 hours a day eating. Cows spend over 8 hours a day chewing their cud which is regurgitated, partially digested food. Cows each drink equivalent to a bath tub full of water a day.

Cows occupy a unique role in human history. Cows have been considered one of the oldest forms of wealth. Cows have always been of interest to man because of their amazing ability to be able to provide meat and dairy products, have been strong animals to work with and also reproduce themselves while eating nothing but grass. Amazing! 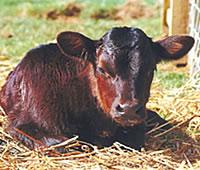 The average cow is 2 years old when she has her first calf. Calves are fed from the cow until they are between 8 and 9 weeks old. It is essential for a calf to be fed their mothers milk from the start as it contains antibodies that protect the new calf from diseases. Two months before giving birth, a dairy cow takes a rest from giving milk in order to grow her calf.

During this period the cow is known as a Dry Cow. When a dairy cow gives birth, this process is called a freshening. All calves are born with horn nubs. It is common for a vet to remove these nowadays.

Did you know that cows never forget their calves. It is quite common to see them licking their grown calves just as they did when they were young.

How to determine the age of a cow 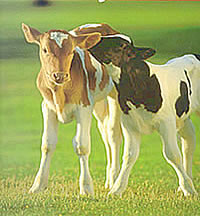 The age of a cow is determined by examination of the teeth and less perfectly by the horns. The temporary teeth are in part erupted at birth and all the incisors are erupted within twenty days. The first, second and third pairs of temporary molars are erupted in thirty days. The teeth have grown large enough to touch each other by the sixth month. They gradually wear and fall in eighteen months. The fourth permanent molars are through at around the fourth month.

The fifth at the fifteenth month and the sixth at two years. The temporary teeth begin to fall at twenty-one months and are entirely replaced by the thirty-ninth to the forty-fifth month.

Learn more about cow anatomy and the cow’s stomach.