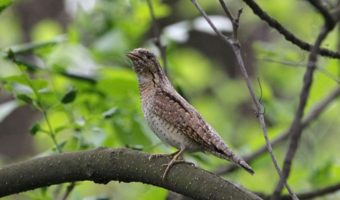 The beaks of the Eurasian Wryneck are shorter and less dagger-like than in the true woodpeckers. Their main prey is ants and other insects, which they find in decaying wood or almost bare soil. Eurasian Wryneck birds reuse woodpecker holes for nesting, rather than making their own holes. Their eggs are white, as with many hole nesters.

The Eurasian Wryneck birds get their English name from their ability to turn their heads almost 180 degrees.

When disturbed at their nest, they use a snake-like head twisting and hissing as a display of threat. This odd behaviour led to their use in witchcraft, hence to put a ‘jinx’ on someone.

There are six subspecies of the Eurasian Wryneck: