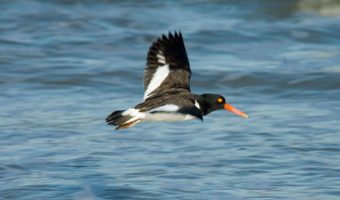 The bird is characterized by its black and white body and a long, thick orange bill. It was originally called the “sea pie”, but was renamed in 1731 when naturalist Mark Catesby observed the bird eating oysters.

The IUCN Red List labels the American oystercatcher as Least Concern, as the total number of individuals is believed to be stable, and actually increasing in the case of the United States. Despite this, in some states the bird is listed as a species of concern because of low and declining populations. 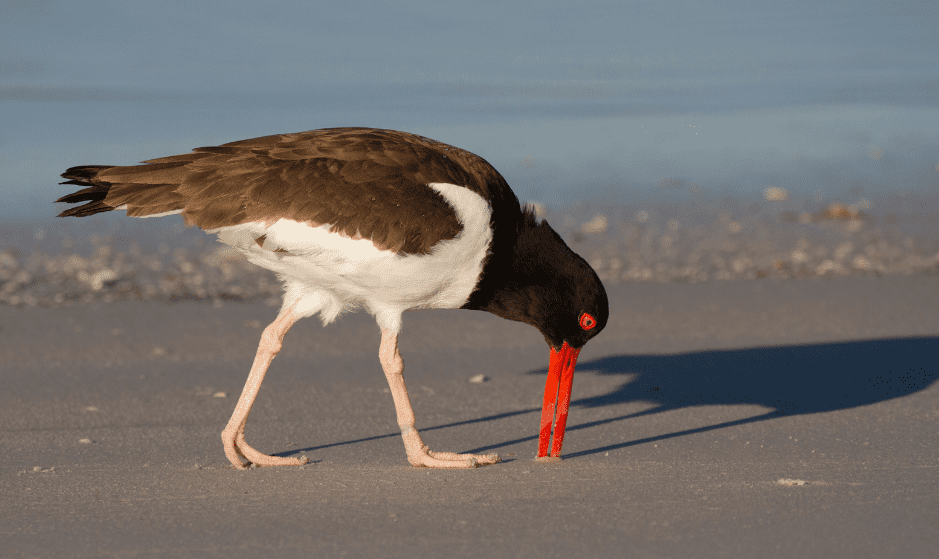 The American oystercatcher is a large bird that are 40 to 44 cm long, have an average wingspan of 81 cm, and weigh between 400 and 700 g. Females are usually larger than males, although the two sexes look very similar.

They have a black and white plumage and a long, bright orange beak. Their head and breast are black and their back, wings and tail are greyish-black. The underparts are white, as are feathers on the inner part of the wing which become visible during flight. They have yellow irises and the eyes have orange orbital rings. Their legs are pink.

Their long, straight, chisel-like bill is red to orange in color, with dark colorings visible toward the end in juveniles.

The American oystercatcher has an average lifespan of around 17 years. 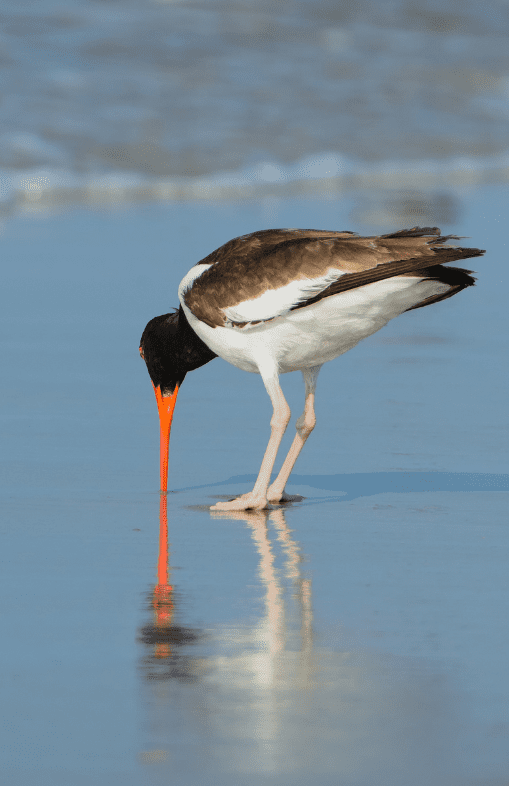 They use two feeding methods — “stabbing”, where a bird walks around an exposed shellfish bed until it spots an open bivalve, which it quickly stabs, and “hammering”, in which the bird simply plucks a single mussel from a group of mussels, takes it to a different location, and holds it in its beak in such a way that when it begins hammering, the shell breaks easily.

Stabbing can be dangerous, and the oystercatchers are sometimes drowned when they don’t completely sever the muscle that causes the shell to clamp shut.

American Oystercatchers patrol the beaches for food and are somewhat approachable, they actually come close to the tourists. Chicks are often seen trying to get their own food when just a few weeks old. This behaviour is typical of shore birds who are less dependant on their parents than sea birds.

The American oystercatcher is a social species and tend to roost communally in groups containing up to 100 or more individuals. During the day, these birds can be seen running or walking more often than flying.

Their normal flight pattern is rapid and deep wing beats. This becomes softer during courtship displays and when predators are nearby. Much of their daily routine is spent preening, head scratching, sleeping, standing and sunbathing.

These birds are very vocal. Their call is loud, rising, and then descending. It is used for a variety of purposes including: greetings between individuals, warning alarms, territorial disputes, establishing dominance in feeding areas, and begging for food from parents.

The American oystercatcher is typically monogamous. They attract their mates by performing courtship displays that include both visual and auditory aspects. Courting birds walk parallel to one another while holding their necks outstretched, looking downwards, and making a loud piping call. Breeding is usually initiated by the female, who stiffens her body, raises her tail, straightens her legs, bends forwards, and draws in her neck. The male responds to this change in posture by mounting the female for 1 to 2 seconds.

Breeding usually happens between February and July and raise one brood per summer. Both the male and the female are involved in nest building, brooding, incubation, and nest defense. They create a nest in shallow scrapes along the ground, which are usually located on salt marshes, rocky shores, or beaches. Their nest sites generally range from 1 to 2 m above sea level.

Oystercatchers usually raise a clutch of two or three eggs. They hatch after around 24 to 28 days. Chicks are precocial and leave the nest within 24 hours of hatching. Both parents feed the chicks until they fledge, which is normally after 35 days. Chicks rely on their parents for food until their bills become strong enough to probe and stab. The parents will retrieve soft parts of marine invertebrates and either carry them back or eat and regurgitate them for their young.

Some juveniles remain with their parents for up to 6 months. They become sexually mature between three and four years of age.

Oystercatchers are typically short-distance migrants. Breeding birds from South Carolina to Florida generally do not migrate, but will leave breeding territories to join local roosting flocks during the non-breeding season. Northern breeders move south, probably to southeastern United States, for the winter.

The American oystercatcher has a far spreading range across the world and they can be found in the United States, Cuba, Brazil, and Mexico. These birds are the only species native to the Atlantic Coast of North America. They can be found year-round throughout parts of the Caribbean and the Gulf Coast.

Along the Atlantic Coast, the American oystercatchers breeding range spans between Massachusetts and Florida. In South America, this species occurs as far south as Chile and Argentina. They are also found locally on both coasts of Mexico and Central America and on the Galapagos Islands.

The American oystercatcher is a common sight on rocky and sandy beaches, saltwater lagoons and mudflats. In the winter, they are more concentrated in areas with abundant food sources such as reefs, oyster beds, or clam flats. During spring and fall migration, these birds can be found on shellfish beds, sand flats, or intertidal mudflats. They very rarely venture inland. 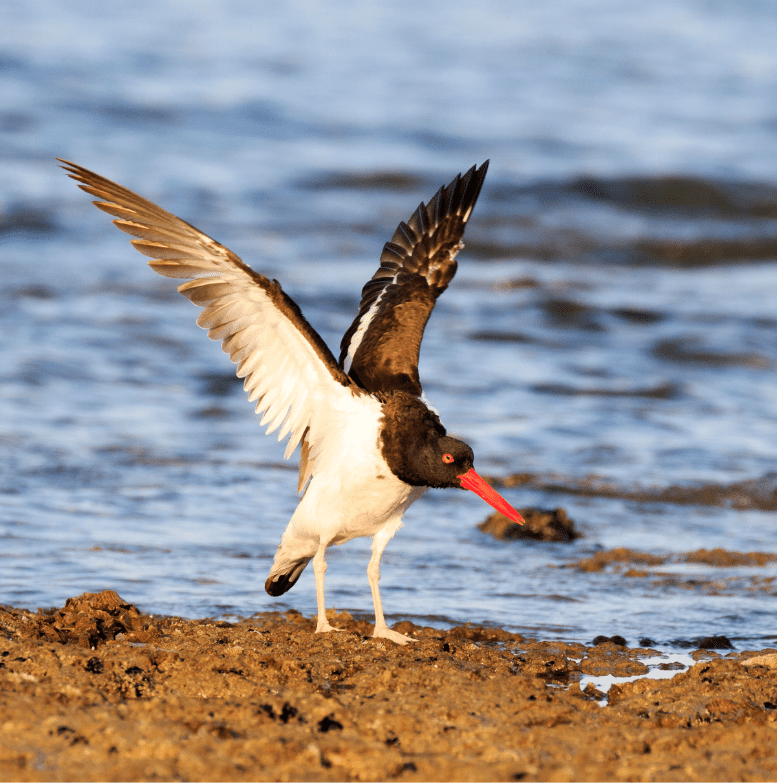 These birds are also threatened by pollution, disease, and invasive species which can impact food availability. Historically, the American oystercatcher was hunted to near extinction in the 19th century for plumage and eggs. They have recovered significantly since the passage of the Migratory Bird Treaty Act in 1918.

American Oystercatchers patrol the beaches for food and are somewhat approachable. Although they are shy birds, they so actually come close to the tourists. 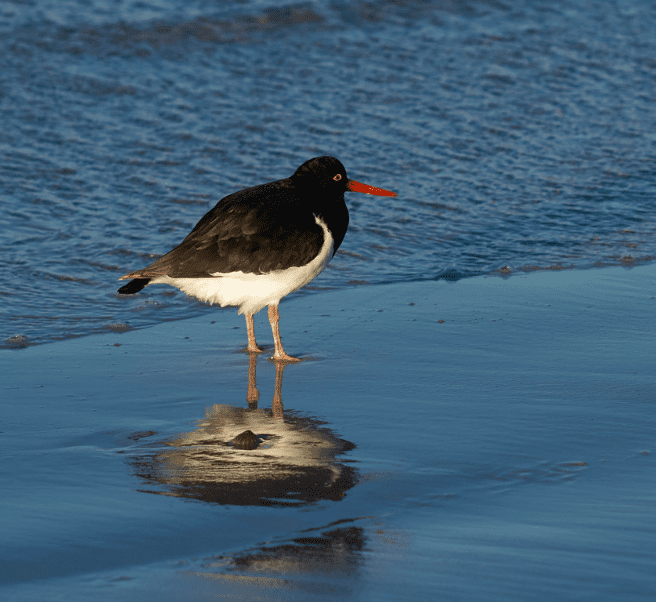 The Magellanic oystercatcher is found in Argentina, Chile and the Falkland Islands in freshwater lake and sandy shore habitats. It has a length between 42 and 46 cm (17 and 18 in). The male weighs around 600 g (21 oz) and the female is a little heavier.

It is very similar in appearance to the American oystercatcher, but can be distinguished by the yellow ring of bare skin that surrounds its yellow eye and the white secondary feathers. No other species of oystercatcher has these two features, and it is also the only New World species to have a black rather than a brown back.

It is listed as Least Concern on the IUCN Red List.

The blackish oystercatcher is found in Argentina, Chile, the Falkland Islands and Peru, and is a vagrant to Uruguay. The population is estimated at 15,000 to 80,000 individuals. It is listed as Least Concern by the IUCN Red List.

It has a black plumage with a dark brown back and wings. It has white legs. The sexes are similar in appearance. Its dark color blends in with the color of the rocks on which it walks as it forages, and it does not draw attention to itself.

The black oystercatcher is large and entirely black. Like the American oystercatcher, it has a bright yellow iris and a red eye-ring. Its plumage varies slightly from north to south, being darker further north. 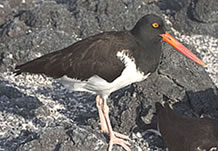 The American oystercatcher is a distinct large bird in the species with a black and white plumage. It can range in size from 42 to 52 cm (17–20 in) in length. It is mostly found on the Atlantic coast of North America from New England to northern Florida, where it is also found on the Gulf coast, the Caribbean, and south to Brazil, Uruguay and Argentina. It is found also in the Pacific coast of California, Mexico, Central America, Peru, and Chile.

The Canary Islands oystercatcher was of similar size as its relatives, the African and Eurasian oystercatchers, or about 40–45 cm (around 16.5 in). In appearance, it was very similar to the African species and was mostly black with whitish underwing bases.

It is thought to have disappeared around 1940 after a prolonged decline starting probably in the 19th century. It was officially declared extinct with publication of the 1994 IUCN Red List.

The African black oystercatcher, also known simply as the African oystercatcher, is found on the mainland coasts and offshore islands of southern Africa. Its breeding range extends from Lüderitz, Namibia to Mazeppa Bay, Eastern Cape, South Africa. It has a population of over 6,000.

The African oystercatcher is a large oystercatcher, measuring 42 to 45 cm (17 to 18 in). It is completely black, except for its red legs and red bill. The sexes are similar in appearance, however, females are larger and have a slightly longer beak than males.

This species has a call very similar to Eurasian oystercatchers, but they have a different coloring so are easy to tell apart. 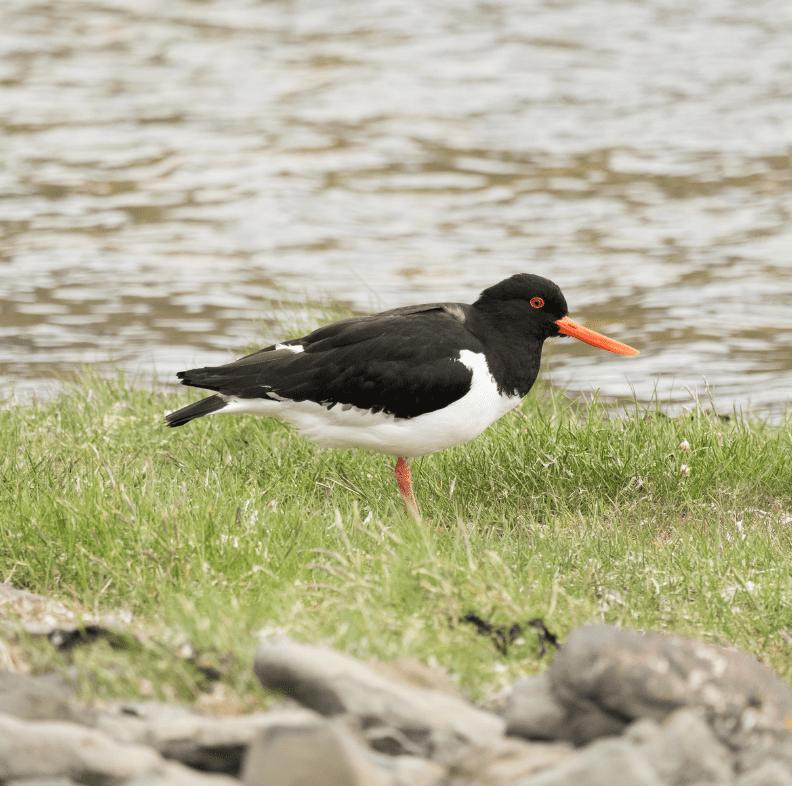 This species is one of the largest waders in its region. It is 40–45 cm (16–18 in) long. They have a black and white plumage and red legs. It is easy to identify in the sky because of its white patches on the wings and tail, otherwise black upperparts, and white underparts.

The Eurasian oystercatcher is listed as Near Threatened on the IUCN Red List.

The pied oystercatcher is a wading bird native to Australia and commonly found on its coastline. It is similar to the South Island pied oystercatcher that occurs in New Zealand. It has a black and white plumage and, when its wings are extended, a white wing-stripe is also visible. Males and females look very similar, but males usually have a shorter, wider beak. 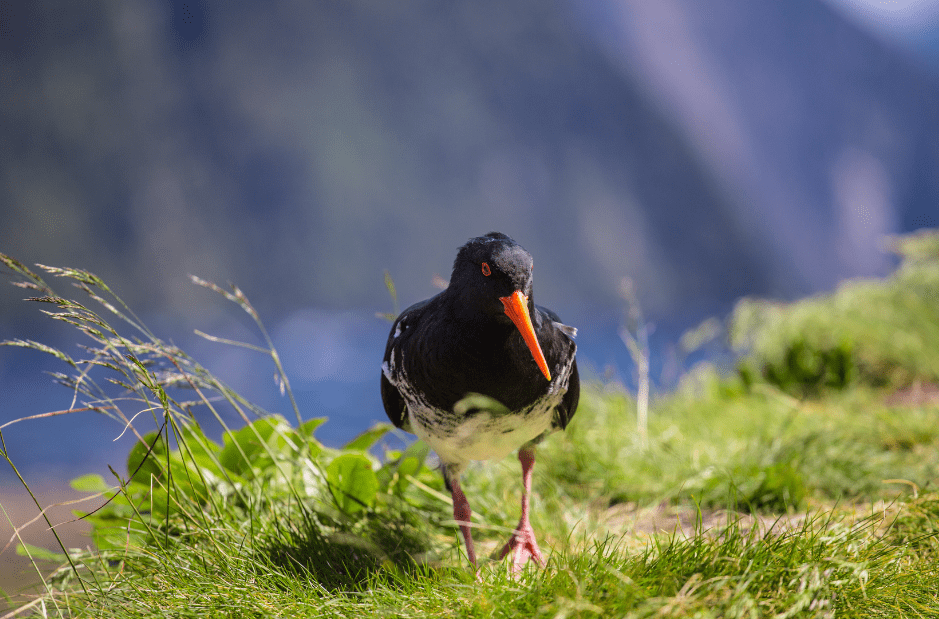 The South Island pied oystercatcher is a large bird, up to 46 cm in length, and has a black and white plumage. It is distinguished from the variable oystercatcher by a white lower back, more white on the wing, and a demarcation line of black and white further forward on the breast. It is distinguished from the pied oystercatcher of Australia by a longer bill and shorter legs, as well as the forward demarcation line of white on the back being pointed rather than square.

Like the variable and South Island oystercatchers, it also has a black and white plumage, however it is slightly larger, at roughly 48 cm in length.

The Chatham Island oystercatcher has a stable population, although its numbers were recorded as low as between 310 to 360 individuals in 2006. The IUCN rates the Chatham oystercatcher as “Endangered”, and the Department of Conservation as “Nationally Critical”. 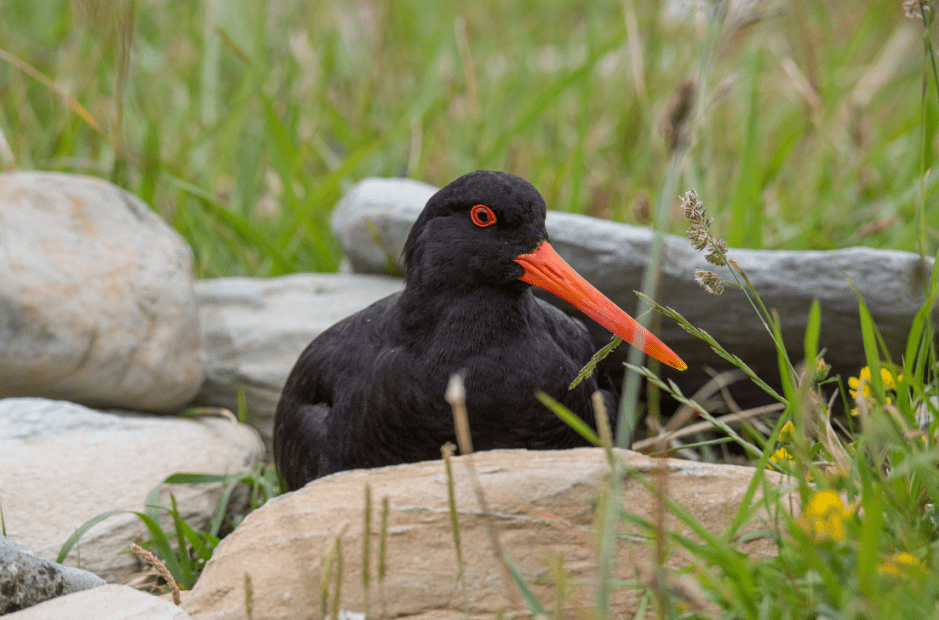 The variable oystercatcher is another species of oystercatcher that is endemic to New Zealand. They are often seen in pairs on the coast all around New Zealand. Their distribution around New Zealand is around most of the North, South and Stewart Islands coastlines and some offshore islands with the exception of outlying islands off the west coast. Their preferred habitat is a wide range of coastal habitat types varying depending on activity and habitat available.

The name “Variable” refers to the frontal plumage, which ranges from pied through mottled to all black. Their orange-red beaks are similar to a needle shape — thin and long — and darkens to a deep red color during the breeding season. These birds can range in size from 42 to 47 cm in length.

This species is listed as Least Concern by the IUCN Red List. There are currently estimated to be between 4,000 and 5,000 individuals in total.

The sooty oystercatcher is endemic to Australia and commonly found on its coastline. It prefers rocky coastlines, but will occasionally live in estuaries, too. Its local name is black redbill.

There are estimated to be around 11,500 individuals of sooty oystercatcher, 4,000 of the nominate race and 7,500 of the northern race. They are listed as Least Concern by the IUCN Red List.