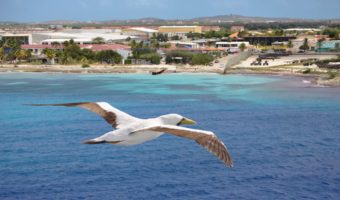 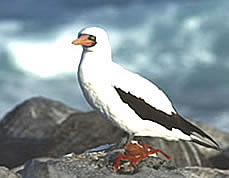 The Masked Booby (Sula Dactylatra) is the largest of the Galapagos Booby birds and can grow to 30 to 35 inches (76 to 89 centimetres) in length with a wingspan of 5 to 6 feet (1.5 to 1.8 metres). Adult birds are easily identified with their beautiful white head, body and wing coverts, dark tails, masks, and patches on their backs.

Young masked boobies with their grey legs and feet. Sometimes their dark head and bellies can be mistaken for the Brown Booby and the Nazca Booby.

The Masked Booby plunges head first into the ocean to catch flying fish and squid. It can dive from distances of over 90 feet.

The Masked Booby is silent at sea, but has a reedy whistling greeting call at the nesting colonies. While on the breeding grounds, these birds display a wide range of hissing and quacking notes.

Masked Boobies are common in the tropics and subtropics nesting in colonies along cliffs or at the sea edge. These are the only Boobies in the Galapagos to have an annual breeding cycle, though the cycle varies between islands. On Tower Island most of the eggs are laid between August and November while on Hood Island (Espanola) the eggs are laid from November to February.

The Masked Booby makes its nest in a shallow depression on the ground. It nests in large colonies. The female usually lays one to two eggs. Both parents incubate the eggs. They use their webbed feet to warm the eggs. The eggs hatch in about 43 days. If there are two eggs, the first may hatch up to nine days before the second egg.

Masked Booby chicks fledge when they are a little over three months old. They will continue to be cared for by their parents for another one or two months. Males will mate with only one female.

The Masked Booby lives on the open ocean. It only comes on land to breed and raise its young.