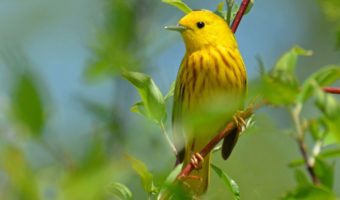 Another colorful bird of the Galapagos Isles is the Yellow Warbler. This bird is not endemic and may be found anywhere from Alaska to Peru. The male has thin red streaks on its chest and a red cap. It is common throughout the Galapagos Islands, especially found in mangroves or manzanillo trees. 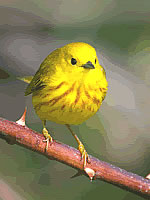 An interesting fact about the Yellow Warbler is that their nests of are frequently parasitical by the Brown-headed Cowbird. The Warbler often builds a new nest directly on top of the parasitic one, sometimes resulting in nests with up to six tiers. To distinguish between male and female Yellow Warblers, you have to observe their chest features. As mentioned above, the male has reddish streaks on his chest and the female has duller coloring with very faint red streaks or no streaks at all.

Infant Yellow Warblers are similar to the adult female, but paler and duller, usually without reddish chest streaks. Their yellow tail spots are reduced are more faded.

The Yellow Warbler feeds on insects and other arthropods, occasionally fruit.

The Yellow Warblers song is a ‘sweet sweet sweet’ chorus, which is beautiful to the ears.