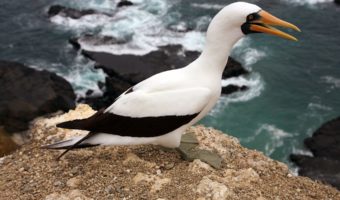 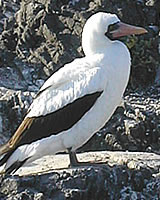 Nazca Booby Birds are the largest of all the boobie birds on the Galapagos Islands. Nazca Booby birds are ground nesters and annual breeders, however in the last few years they have been behaving as opportunistic breeders. During courtship, Nazca boobies display an interesting dance ritural that begins with the sky point. This display is performed by male Nazcas to indicate to potential females that they are available to mate.

The male Nazcas then wait for the females to show and perform the sky point too. In females however, this action will indicate that they want to be impressed by the males.

Once the two sides have agreed, males begin to offer gifts to the females. These gifts will be ignored at first, just as if the female would be saying: ‘I do not know you well enough yet’, however, soon she will accept the gift. As soon as that happens, it is only a matter of time for them to mate.

Mating does not last as long as courtship, it happens extremely quickly. The dance itself has the purpose of creating a little depression in the ground where the eggs will eventually be laid.

Nazca Booby Birds lay two eggs, several days apart from which only one chick survives due a practice called ‘obligatory sibling murdering’. In this process, one of the chicks displaces the other by taking most of the food, therefore growing faster. Once that has been achieved, the larger chick kicks the smallest and weakest chick out of the nest, leaving it to die of thirst or cold. The parent Nazca Booby Birds will not intervene and the younger chick will inevitably die.

It is believed that two eggs are laid so that one remains an insurance in case the other gets destroyed or eaten e.g. by gulls, or the chick dies soon after hatching.

In the last four to five years, Nazca booby birds have been nesting continuously. The reason for this seems to be that they are capable of varying their diet. Nazca Boobies are known for being pelagic in between the islands. This means that they fish some five to twenty miles off-shore. Traditionally, Nazca were eating some salemas (black striped snappers) and sardines, but ever since the last El Niño-Southern Oscillation (ENSO) (1998), the oceanographic conditions are somehow different and the distribution of the fish has changed. Now it is common to have more flying fish replacing the salemas and sardines.

Nazca Booby Birds seem to have been very adaptable and that is why they are nesting non stop for the last four or five years.