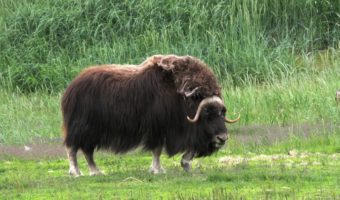 The Musk Ox (Ovibos moschatus) are large cattle-like animals that are part of the Bovidae family. They can be found on the treeless tundra from Alaska east through northern Canada to Greenland. Their name is derived from the strong musky smell of the bulls that is omitted during the mating season in summer. The musky smell is used to attract females during breeding.

There are 2 known subspecies of Musk Ox, Greenland Musk ox (Ovibos moschatus wardi) also known as the White-Faced Musk ox which are found in Greenland and the Canadian high Arctic and the Barren Ground Musk ox (Ovibos moschatus moschatus) which are found on the Canadian mainland. Musk Ox are more closely related to sheep and goats than to oxen. The closest relative of the Musk ox is the Takin, a goat-antelope found in the Eastern Himalayas. 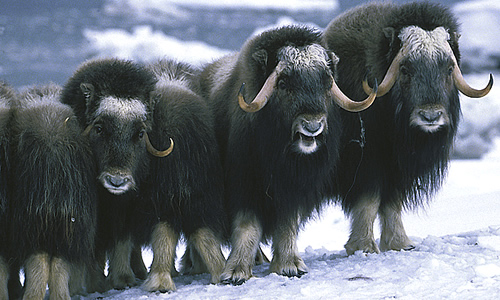 The Musk Ox is a huge hoofed mammal with a heavy bony plate across the forehead. The Musk Ox, along with Yaks of Central Asia, have the longest fur of any other animal. They have an insulated woolly undercoat and some of the hairs in the outer coat are almost 100 centimetres long. Their coats are thick and dark brown hair in color and hang almost to the ground.

Musk Oxen have a stocky build and a pronounced shoulder hump. These bulky animals can stay in the Arctic all year round, surviving temperatures of -70 degrees centigrade. With its long, shaggy outer coat, the Musk Ox is well protected from the bitterly cold winds of the Arctic Tundra.

Adult Musk Ox measure around 1.9 – 2.3 metres (6.25 – 7.5 feet) in length from head to rump and weigh 200 – 410 kilograms (440 – 900 pounds). Musk Ox stand around 1.2 metres (3 feet 11.2 inches) high at the shoulder. Males are larger than females. Their huge size means they have very few natural predators. However, young Musk Ox are vulnerable to predators especially when newborn. Both male and female Musk Ox have broad, curling horns.

During the summer, Musk Oxen live in wetlands, such as river valleys, moving to higher elevations in the winter to avoid the deep snow.

Musk Ox are herbivores and graze on grasses, reeds, sedges and other ground plants, digging through snow in the winter to reach their food. One of their favourite foods is willow.

Musk Oxen live in herds of around 10 -20 animals and are social animals. Winter herds can contain over 70 animals of both male and female.

Young Musk Ox are often taken by Grey Wolves, however, if the herd spots a wolf pack soon enough, it has a chance to deploy an effective defensive strategy. Adults quickly gather into a circle of tightly packed animals, all facing outwards, with the young hidden away in the middle. The hunting wolves meet a wall of tough heads and horns and large bulls will charge out of the ring, swiping their horns at their attackers. The defence is only broken if the wolves manage to get the Oxen on the run. Other predators of the Musk Ox are the Brown Grizzly Bear and the Polar Bear.

Mating season peaks in mid August when males compete for dominance. One dominant bull will drive the other males out of the herd. Non-breeding males will often for herds of 5 – 10 and wander the tundra alone. Males can get extremely aggressive during breeding season and chase off any other animal that approaches, even birds. To prove their dominance, males have confrontations known as ruts. During these ruts, males emit a lion-like roar and run towards each other, crashing their heads together. 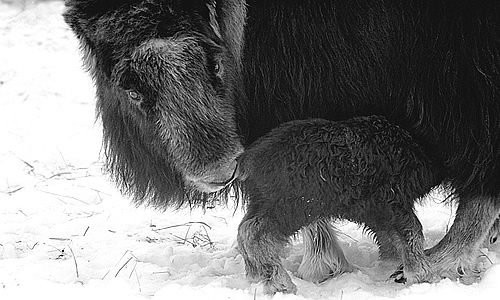 Females are sexually mature at 2 years of age. Males reach maturity much later at around 5 years. The gestation period is 8 – 9 months and almost all births are single calves. The young are nursed for around a year but may begin to eat grass as soon as a week after birth. The young huddle in its mothers long coat to keep warm.

The conservation status of the Musk Ox is ‘Least Concern’. Muskoxen became extinct across much of their range in Europe and Alaska, largely as a result of overhunting. Reintroduction attempts have since been reasonably successful and muskoxen now live once again in parts of Alaska and northern Europe. They are not currently listed as threatened in any way.