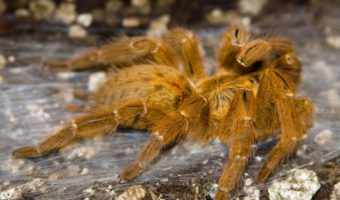 Old World Tarantulas, especially those native to Asia, differ from the New World tarantulas as this species lack urticating hairs. Instead they use biting as a defensive mechanism (as well for subduing prey). In addition, these Old World spiders are far less docile and more likely to try and bite an adversary (including humans) if provoked.

The effect of Old World tarantula venoms is not well studied, however evidence suggests they have stronger venom than their New World counterparts.

There are many anecdotal reports from individuals in the tarantula pet trade of significant bites occasionally resulting in hospitalisation. Symptoms include localized pain and swelling, exhaustion, moderate to severe muscle cramping, laboured breathing and fever, sometimes delayed days after the initial bite.

The Baboon spider (Pterinochilus murinus), an old-world tarantula, is found on the African continent, in Angola, as well as central, eastern and southern Africa.

Among those who keep tarantulas as pets this spider is known as ‘OBT’ which means ‘Orange Baboon Tarantula’.

These nicknames reference a particular orange color form that is prized in the hobby for its beauty and confrontational personality. It is also known as the ‘Mombasa golden starburst tarantula’.

This species of spider is very aggressive and should not be held. The female Baboon spider can grow to 4 – 6 inches in body length, while males typically range from 3 – 4 inches. The spiders abdomen, carapace and legs have the same basic coloration, though the legs typically have brightly colored rings. The carapace has a star-shaped pattern, with a fishbone pattern present on the abdomen. The eyes are clustered together on a raised part of the carapace (in common with all tarantulas). The body is covered with short hairs, with longer hair present on the legs.

Chinese Bird Spider (Haplopelma schmidti) is an English name given to several species of old world tarantulas which are found in the Peoples Republic of China and Vietnam. The spider, also known in English as the ‘earth tiger’, is currently classified in the genus ‘Haplopelma’. The Chinese bird spider is a fairly large spider, with a typical leg span of up to 8 inches (20 centimetres).

The Chinese Bird Spider is an aggressive species, one that will not hesitate to bite humans if disturbed. Its venom is the subject of much toxicology research and while the effects of this spiders bite to humans is not well-documented, it is lethal in small doses to animals such as mice and rats. As a result, it is generally regarded as a highly venomous specimen. The venom itself is a rather complex neurotoxin, containing numerous compounds capable of blocking neurotransmitters.

The Cobalt Blue Spider (Haplopelma lividum) is a tarantula species that is native to Myanmar and Thailand. Like most Asian tarantulas, it is quite aggressive. As a result, it should only be kept as a pet by experienced and well-informed tarantula enthusiasts.

The Cobalt Blue Spider is also an obligate burrower and generally very shy. As with all Old World spiders they do not possess urticating hairs, so rely more on biting for defence.

While popular as pets for its brilliant blue coloring, one must remember that these tarantulas must be treated as living art and never handled. Cobalt Blue Spiders are extremely aggressive and possess a painful bite.