You are here: Home / Animals / Monkeys 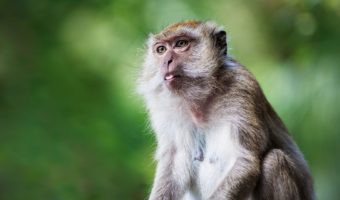 Monkeys are divided into two geographically separate groups – the New World Monkeys of South America and the Old World Monkeys, found in Africa and Asia.

Some species of New World monkeys have a prehensile tail that can be used like a hand or finger to grasp hold of things such as food, branches and twigs.

Because monkeys do not belong to one single group, monkeys do not have any single traits which they all share and they do not share any traits with the remaining group of simians which are the apes.

New World Monkeys include such species as the Marmosets, Spider Monkey, Red Howler Monkey and the Titi Monkey.

Old World Monkeys include such species as the Rhesus Macaque, Hamadryas Baboon and the Black Colobus Monkey.

Monkeys range in size from the Pygmy Marmoset, at 14 – 16 centimetres (5 – 6 inches) long (including their tail) and 120 – 140 grams (4 – 5 ounces) in weight, to the male Mandrill which measures almost 1 metre (3 feet) in length and weighs 35 kilograms (75 pounds). Some monkeys are arboreal (living in trees), some live on the savannah. Monkeys diets differ among the various species, however, they may contain any of the following: fruit, leaves, seeds, nuts, flowers, insects, spiders, eggs and small animals.

The Prosimian group is a sub-order of monkeys, very distinct from the anthropoids (sub-order anthropoidea, including monkeys, apes and humans). The prosimian category includes Lemurs, Lorises, and Tarsiers, small creatures of the tropical forest who may most resemble our earliest ancestors.

Prosimians are restricted to tropical woodlands. Many surviving species have become nocturnal, a habit that has been acquired because they have become withdrawn by competition from monkeys and rodents.