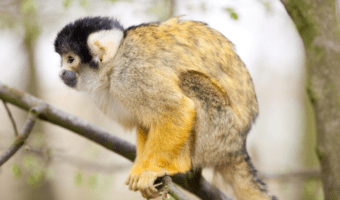 Squirrel Monkeys (New World Monkeys) Squirrel monkeys live in the tropical forests of Central and South America. Their range extends from Costa Rica through central Brazil and Bolivia. Squirrel monkey fur is short and close, colored olive at the shoulders and yellowish orange on its back and limbs. 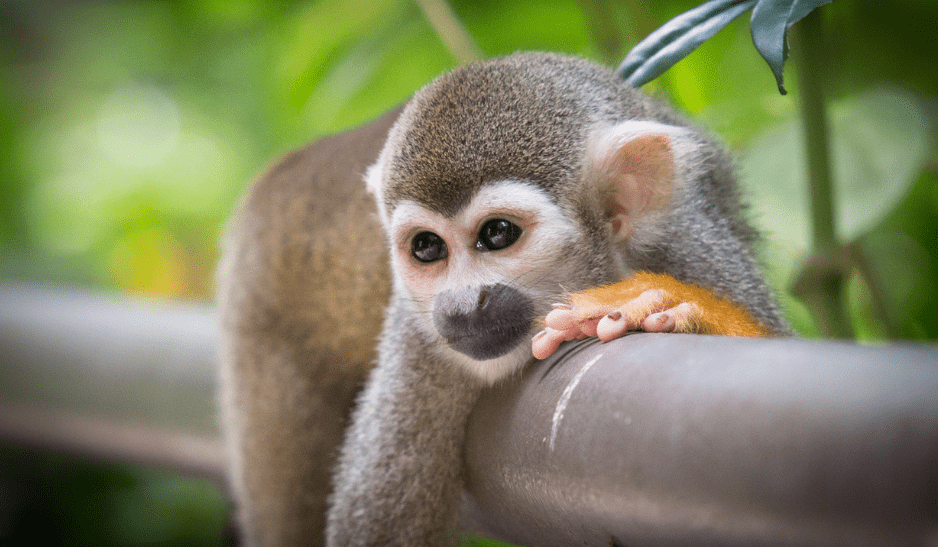 Squirrel monkeys throats and ears are white and their mouths are black. The upper part of their head is hairy. This black and white face gives them their German name, ‘skull monkeys’. 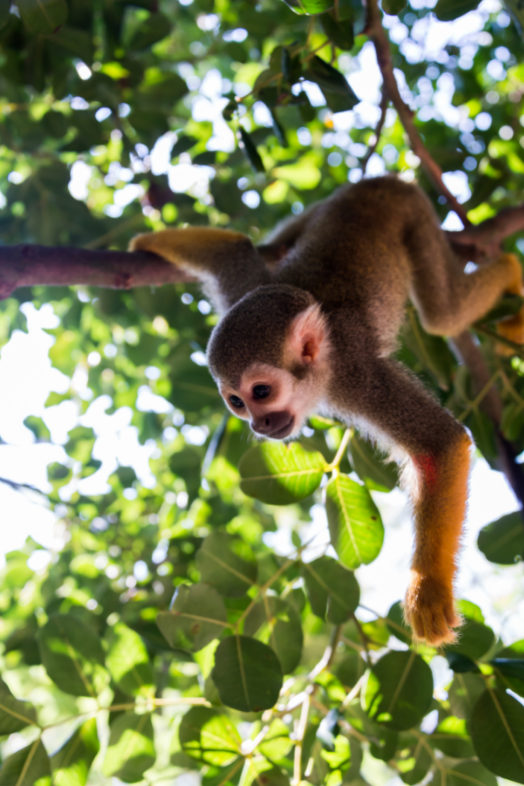 Like most of their New World monkey relatives, squirrel monkeys are diurnal and arboreal. Unlike the other New World monkeys, their tail is not used for climbing, but as a kind of ‘balancing pole’ and also as a tool. Their movements in the branches are extremely fast. Squirrel monkeys live together in multi-male/multi-female groups with up to 500 individuals. These large groups can, however, occasionally break into smaller troops.

These monkeys have a number of vocal calls, including warning sounds to protect themselves from large falcons, which are a natural threat to them. Squirrel monkeys small body size also makes them susceptible to predators such as snakes and big cats. For marking territory, squirrel monkeys rub their tail and their skin with their own urine.

The Bare-eared Squirrel Monkey (Saimiri ustus) is a squirrel monkey endemic to Brazil. They have black crowns and reddish backs. The common and Central American species both have hair on the ears, unlike the bare-eared squirrel monkey (S. ustus) of central Brazil. Conservation Status – Least Concern.

There are significant efforts within Costa Rica to try to preserve this monkey from extinction. The Central American Squirrel Monkey differs in coloration from squirrel monkeys from South American. While South American squirrel monkeys tend to be primarily greenish in color, the Central American Squirrel Monkey has a reddish brown back with grey legs and white undersides. There is a black cap at the top of the head and a black tip at the end of the tail. The face is white with black rims around the eyes and black around the nose and mouth. Conservation Status – Endangered.

The Common variant lives in very large groups, up to 300 individuals, on moist tropical forests and usually forages in the medium and lower levels of the forest and sleeps close to the canopy.

The females are the dominant members of the group. It is a very agile monkey, with a high metabolic rate and although an omnivorous animal, it feeds primarily on insects and other invertebrates. It also feeds on fruits, seeds and other plant parts. It is common to see these squirrel monkeys in mixed groups, moving along with other primate species and birds.