You are here: Home / Animals / Moose 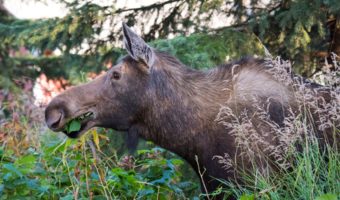 Moose (Alces alces) are the worlds largest deer species and are found in northern forests in North America, Europe, and Russia. In North America, the moose range includes almost all of Canada, most of central and western Alaska, the upper Rocky Mountains and Michigan’s Upper Peninsula. In 1978 a few breeding pairs were introduced in western Colorado and the states moose population is now more than 1,000 individuals.

In Europe, moose are found in large numbers throughout northern european countries. Moose are also widespread through Russia. Small populations remain in Poland and Belarus. In 2008 moose were reintroduced in to the Scottish Highlands in the United Kingdom. There are five subspecies of moose: 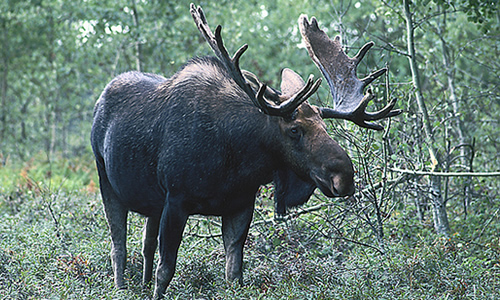 Moose have long legs with the front pair being longer than the hind pair. They have a long snout, a droopy bottom lip, short tail and a hump on their shoulders. Moose have a flap of skin like a waddle beneath their chin that is called a ‘bell’ or ‘dewlap’. Each of its feet has two large hoofed toes and two smaller toes. Moose can move fast, even when it is wet and muddy. The two large toes on their hooves spread wide apart to keep the animal from sinking.

The huge palmate antlers of a mature male moose measure between 1.2 metres (3.9 feet) and 1.5 metres (4.9 feet) wide. The smallest type of moose is the European moose (Alces alces alces), which weighs 350 kilograms (770 pounds) in males and 310 kilograms (683 pounds) in females. The male moose will drop its antlers after the mating season and conserve energy for the winter. Their antlers regrow in the spring. Antlers take 3 to 5 months to fully develop, making them one of the fastest growing animal organs. They initially have a layer of skin called ‘felt’ or ‘velvet’ which is shed once the antlers become fully grown.

Young male moose may not shed their antlers for the winter, but retain them until the following spring. The first pair of antlers on a young moose grow from two tiny bumps on their head that are there from birth. The main purpose of antlers is for display during the mating season and dominance within the herd.

Moose are large even-toed herbivorous mammals which feed up on birch and aspen twigs, horsetail, sedges, roots, pond weeds and grasses. Moose eat leaves, twigs, buds and the bark of some woody plants, as well as lichens, aquatic plants and some of the taller herbaceous land plants. Moose can be seen eating during the day and night, but they are usually out at dawn and dusk. Moose can actually feed under water.

Moose are mostly diurnal animals. They are generally solitary with the strongest bonds being between mother and calf. Two individuals can sometimes be found feeding along the same stream. The males are polygamous and will seek several females to breed with. Groups or herds are generally seen during breeding season and may only contain two adults. Each group, were possible, would occupy an area of 300 – 600 hectares.

A moose can run 35 miles per hour and can easily swim 10 miles. Moose will lie in shallow water to get away from biting insects or to cool off. Their tails are too short to swish the flies away. Moose are able to kick out in all directions, however, they generally use their front feet to defend themselves. Moose have poor eyesight and rely on their keen sense of smell. Often, while they are eating, moose will just suddenly stop and listen to see if they can hear any threats.

You can tell when a moose might attack if the long hairs on its hump are raised and its ears are laid back. A moose may also lick its lips.

Some populations of moose (particularly in Europe) migrate.

Moose breeding season occurs in September and October. During this time both male and female moose will call to each other. Males produce heavy grunting sounds that can be heard from up to 500 metres away while females produce a wail-like sound. Males will fight for access to females. The larger moose generally wins and the smaller moose retreats. They may engage in battles that can turn quite violent.

Female moose have an 8 month gestation period. Most litters consist of a single calf, however, twins are not uncommon. The young are unable to walk for a few days. By the time they are 2 weeks old they are able to walk about with their mother and search for food. By autumn, the calves stop suckling their mothers milk. The calves stay with the mother for about a year, until she is ready to give birth to new calves.

A full-grown moose has few enemies, however, a pack of wolves can still be a threat, especially to females with calves. Moose will sometimes stand their ground and defend themselves by charging at the wolves or lashing out at them with their powerful hooves. The life span of a moose is around 15 – 25 years.

Moose are not currently threatened, despite being hunted. Some have been domesticated for milk and meat.

The name of a male is referred to as a bull

The name or offspring, or a baby Moose, is a calf

Herds are dominated by one female

The word moose is comes from the Algonquian indians. The Algonquins called this creature 'mooswa' and it means 'twig-eater' or 'the animal that strips bark off of trees'Moose have 27 pairs of chromosomes compared with 23 pairs in humans.Because of the shape of its face and its odd upper lip, the moose has earned the nickname of 'bucket face'.The plural of moose is 'moose' not 'meese' unlike the plural of goose is 'geese'.