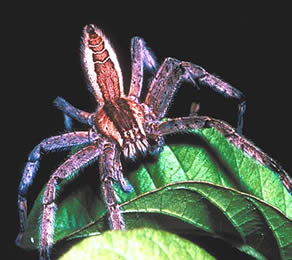 Spiders are classified in the order Araneae, one of several orders within the larger class of arachnids, a group which also contains scorpions, mites, ticks and opiliones (harvestmen).

There are more than 40,000 described species of spider. Spiders are found all over the world, from the tropics to the Arctic.

Spiders are found living underwater in silken domes they supply with air and on the tops of mountains.

Spiders occur in a large range of sizes from 6 millimetres to 10 – 12 inches. All spiders have eight legs, although a few ant-mimicking species use their front legs to imitate antennae, which spiders lack. Spiders are invertebrates (which means they do not have a backbone). They are predatory animals that have no wings and no chewing mouth parts. Instead, like other arachnids, they have a tiny proboscis which they use to suck up the liquid parts of their prey. However, spiders are able to eat their own silk.

Spiders are not insects (insects have three body parts and six legs). Spiders have two body parts, a hard front part, the head and thorax, called the cephalothorax or prosoma and a soft hind part, the abdomen, called the opisthosoma. The abdomen and cephalothorax are connected with a thin waist called the pedicle or the pregenital somite, a trait that allows the spider to move the abdomen in all directions. This waist is actually the last segment (somite) of the cephalothorax and is lost in most other members of the Arachnida (in scorpions it is only detectable in the embryos).

Spiders have two palps (used for grooming and feeding) attached to the cephalothorax. The ends of the palps are modified in adult males into elaborate and often species-specific structures used for mating. Since they do not have any antennae, they use specialised and sensitive hairs on their legs to pick up scent, sounds, vibrations and air currents.

Most spiders have eight eyes in various arrangements. Spiders eyes are single lenses rather than compound eyes, ranging from simple light/dark-receptors to eyes rivaling those of a pigeon (in some jumping spiders). Some species of the Haplogynae family have six eyes, although some have eight (Plectreuridae), four (Tetrablemma) or even two (most Caponiidae) eyes. Sometimes one pair of eyes is better developed than the rest, or even, in some cave species, there are no eyes at all. Several families of hunting spiders, such as jumping spiders and wolf spiders, have fair to excellent vision. The main pair of eyes in jumping spiders even see in colour.

Spiders produce seven kinds of silk (a thin, strong protein strand), ranging from sticky stuff to trap and wrap their prey to super strong threads for support. Spiders also use their silk as parachutes and to shelter themselves and their young. The various types of silk are produced by different specialized silk glands and nozzles called spinnerets most commonly found on the end of the abdomen. No one spider is able to produce the full range of silk. Many species use it to trap insects in webs, although there are also many species that hunt freely. Silk can be used to aid in climbing, form smooth walls for burrows, build egg sacs, wrap prey and temporarily hold sperm, among other applications.

All spiders except those in the families Uloboridae and Holarchaeidae and in the suborder Mesothelae (together about 350 species) have fangs and can inject venom to protect themselves or to kill their prey. Only about 200 species, however, have bites that can pose health problems to humans. Many larger species of spider have bites that may be quite painful, but will not produce lasting health concerns. Read more about venomous spiders HERE!

Digestion is carried out internally and externally. Spiders that do not have powerful chelicerae, secrete digestive fluids into their prey from a series of ducts perforating their chelicerae. These digestive fluids dissolve the preys internal tissues. Then the spider feeds by sucking the partially digested fluids out. Other spiders with more powerfully built chelicerae masticate the entire body of their prey and leave behind only a relatively small residue of indigestible materials.

Spiders have an open circulatory system which means they do not have true blood, or veins to convey it. Rather, their bodies are filled with haemolymph, which is pumped through arteries by a heart into spaces called sinuses surrounding their internal organs.

Spiders are oviparous, which means their young come from eggs. The spider life cycle progresses through three stages: the embryonic, the larval, and the nympho-imaginal.

Spiders reproduce by means of eggs, which are packed into silk bundles called egg sacs. Spiders often use elaborate mating rituals (especially jumping spiders) to allow conspecifics to identify each other and to allow the male to approach and inseminate the female without triggering a predatory response. If the approach signals are exchanged correctly, the male spider must (in most cases) make a timely departure after mating to escape before the females normal predatory instincts return and eats him. Male spiders are usually smaller than female spiders.

The time between when an egg is fertilized and when the spider begins to take the shape of an adult spider is referred to as the ’embryonic stage’. As the spider enters the larval stage, it begins to look more and more like a full grown spider. It enters the larval stage as a prelarva and, through subsequent molts, reaches its larval form, a spider-shaped animal feeding off its yolk supply. After a few more molts (also called instars) body structures become differentiated. Soon, all organ systems are complete and the animal begins to hunt on its own. It has reached the nympho-imaginal stage.

This stage is differentiated into two sub-stages: the nymph, or juvenile stage and the imago, or adult stage. A spider does not become sexually mature until it makes the transition from nymph to imago. Once a spider has reached the imago stage, it will remain there until its death. After sexual maturity is reached, the general rule is that they stop molting, but the females of some non-araneomorph species will continue to molt the rest of their lives.

Many spiders may only live for about a year, but a number will live two years or more, overwintering in sheltered areas. The annual influx of ‘outdoor’ spiders entering into houses in the autumn is because they search for a warm place to spend the winter. It is common for female tarantulas to live up to twenty years.

How do spiders protect themseleves?

All spiders will attempt to protect themselves by biting, especially if they are unable to flee. Some tarantulas have a second kind of defence, a patch of urticating hairs, or urticating setae, on their abdomens, which is generally absent on modern spiders. These ultra-fine hairs causes irritation and sometimes even allergic reactions in the attacker. Certain other species have specialized defence tactics. For example, the golden wheeling spider (Carparachne aureoflava) of the desert of Namibia escapes tarantula hawks (a species of wasp that lays its eggs in a paralyzed spider so the larvae have enough food when they hatch) by flipping onto its side and cart wheeling away.

Fear of spiders is called Arachnophobia. It is one of the most common fears among humans. Tarantulas shed their furry skin as they grow, leaving behind what looks just like another tarantula. Spiders eat many types of harmful insects, helping to keep your garden free of pests. Webs get dirty and torn, so lots of spiders make a new one every day. They do not waste the old one, instead they roll it up into a ball and eat it. Young spiders resemble adults. Only their size and colouration differ.