You are here: Home / Animals / Jackal 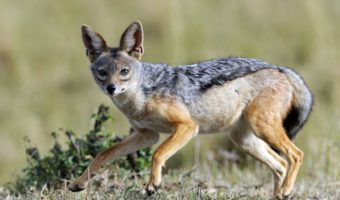 Jackals are similar to the African ecological niche as Coyotes are in North America. 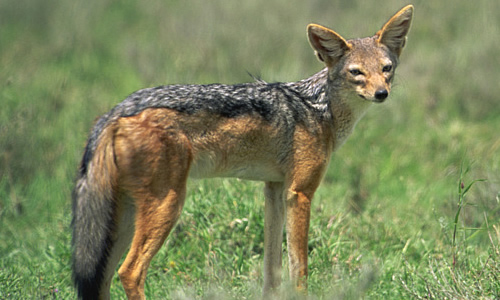 Jackals vary in size and color depending on species, however, they generally measure 15 – 20 inches high at the shoulder, have a body length of 70 – 86 centimetres and weigh between 15 – 35 pounds. Jackals are well adapted as long distance runners with their large feet and fused leg bones. Jackals are able to run for long periods of time maintaining speeds of 10 miles per hour. Jackals have similar features to dogs.

The Common Jackal has a shorter and heavier appearance and has a sandy colored coat while the Black-backed Jackal is the most slender and upstanding species with larger eyes and a distinctive black mantle streaked with silver on its back contrasting with a rusty colored body.

The Side-striped Jackal is more dull in color and has black and white stripes down the sides of its body and a white tipped tail. The Common and the Black-backed Jackals have black tipped tails.

Jackals habitats include desert, grassy plains and open (sometimes wooded) savannas depending on species. The Common Jackal is generally found in deserts, steppes and semi-arid deserts, the Black-backed Jackal is found in woodlands and savannas and the Side-striped Jackal prefers marshes, bush land and mountains.

Jackals are nocturnal, omnivorous scavengers. With their long legs and curved canine teeth, they are well adapted for hunting. Some Jackals may gather to scavenge a carcass or to hunt larger prey such as antelope, gazelles and livestock but normally hunt alone or in pairs. Their diet consists of small mammals, birds, amphibians and reptiles.

Jackals kill small prey with a bite to the back of the neck. They may also shake the animal. Jackals will also supplement their diet with insects, vegetation and fruit. Jackals have a habit of burying their food if an intruder enters the area where it is feeding.

Jackals are very territorial and monogamous pairs will fiercely defend their territory from intruders. Territories may also contain some young adults who have remained with their parents until they are able to establish their own territories. Both male and female jackals scent mark their boundaries. The Black-backed Jackal is the most commonly seen species as it is diurnal. The other two species have a tendency to behave nocturnally. Jackals are adaptable animals and can adapt easily to changing environments. They trot quickly through their territories, frequently stopping to sniff the air and smell for food.

Jackals are very vocal and communicate with each other using a loud yell or yap, growls and high pitched howls, particularly when prey is located. The Side-striped Jackal uses a ‘hoot’ sound like an owls rather than a howl. Jackals will only take notice of the calls from their family and will ignore all other calls.

Jackals are preyed upon by eagles, leopards and hyenas. Eagles are the biggest threat to newborn pups.

Jackals are monogamous, meaning they mate for life. The female Jackal has a gestation period of 8 – 9 weeks (2 months) after which a litter of 3 – 6 pups is born. Each pup weighs 200 – 250 grams at birth. For the first 10 days, the pups are blind and cannot open their eyes. The pups are fed regurgitated food. They are weaned at 4 months and they reach sexual maturity between 1 and 2 years of age.

Pups remain in thickets for the first few weeks of their lives and then venture outside to play with their litter mates. They eventually begin to learn hunting and territorial behaviour from their parents. Their first game play is quite clumsy with attempts at wrestling, pawing and biting. As the pups develop more coordination, they learn to ambush and pounce and will begin to chase and play tug of war among themselves.

Den sites are changed as often as every 2 weeks to help protect the pups from predators. At 8 months, the pups are old enough to leave their parents and establish territories of their own. Often, young jackals return to help the parents raise another litter. With these little helpers, the next litter has more chance of surviving. Jackals have a life span of between 10 and 12 years.

Jackals are not a threatened species and are classed as ‘Least Concern’ by the IUCN.

The Jackal has long been surrounded by superstitions of dead and evil spirits. Ancient Egyptian believed that the God, Anubis, who has a mans body and a Jackals head would guide the dead to the ones who would judge their soul.