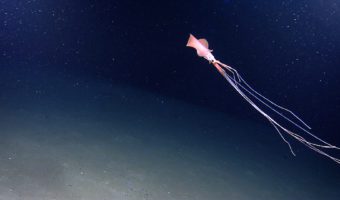 Bigfin squid are a group of cephalopods in the genus Magnapinna and family Magnapinnidae. Little is known about the big fin squid as no adult specimens have ever been captured or sampled. Nonetheless, these animals are notable for their arms and tentacles that are extremely long and thought to be 4 to 8 m (13 to 26 ft) in length.

Currently, scientists have officially described three species of these giant squid, but there may be more. Only more sightings of these unique animals will help us to understand them more.

Bigfin squid stand out from other squid because of their extremely long arms and tentacles. These have been estimated at up to 15-20 times the mantle length, making some of the largest specimens at 8 metres (26 ft) or more. What’s more, the appendages also seem to be held perpendicular to the body, creating the appearance of strange “elbows”

Like other squid, bigfin squid have eight arms and two tentacles — each covered with microscopic, sticky suckers. But the arms and tentacles are indistinguishable from each other, unlike other squid. Also, it is thought that the appendages have little muscle, and likely rely on water movement to maintain their characteristic pose.

Very little is known about the diet or the feeding behavior of these deep-sea squid. It is thought by scientists that they feed by dragging their arms and tentacles along the seafloor and grabbing edible organisms from the floor. They may also use a trapping technique, and trap zooplankton as and when it swims past or bumps into their arms.

Bigfin squid are widely distributed throughout the world’s deep ocean, and they can live deeper than any other known squid. They live at extreme depths of nearly 4,800 meters in the deep sea.

They have been spotted off the coast of Ghana, Senegal, south of Mauritius, the Gulf of Mexico, Hawaii, in the area of Rodrigues Island, the Pacific Ocean, the Indian Ocean, and even around Australia.