Most hamsters in pet stores are Syrian Hamsters. Originally, Syrian Hamsters came in just one colour, the mixture of brown, black and gold which gave them their ‘Golden’ name, however, they have since developed a myriad of colour mutations such as cream, white, banded, tortoiseshell, calico and sable. Therefore in pet stores today, the name Golden Hamster is only used to label the original colouration (also known as ‘agouti’), while the other-coloured short-hairs are banded under the label ‘Fancy Hamster’.

Teddy Bear Hamster is a term used to describe the long-haired variety of the Syrian Hamster, named so for their remarkable resemblance to toy teddy bears. They are also sometimes known as ‘angora hamsters’. Male teddy bear hamsters usually have much longer fur than the female variety, ending in a ‘skirt’ of longer fur around their backsides.

Syrian Hamsters are wildly popular as house pets due to their docile, inquisitive natures and small size. Syrian hamsters are popular as ‘first pets’ for young children, as well as being classroom animals, because of their hardiness and relative ease of care.

Some pet owners find hamsters more attractive in relation to rats and other rodents due to their lack of visible tails. When kept as pets, however, Syrians must be housed on their own, past the age of around 10 weeks. Syrian hamsters are notoriously territorial and will frequently attack and indeed, kill, other adult hamsters of the same gender.

Descendants of the Syrian hamsters were shipped to scientific labs around the world, for use as research animals. Syrian hamsters arrived in the United Kingdom in 1931 and in 1938 reached the United States. Soon after their initial discovery, they were found to make great pets. 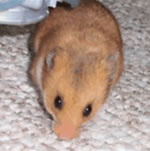 Just about all Golden Hamsters are descended from the original litter found in Syria, except for a few that were brought into the United States by travellers who found them in the desert. A separate stock of hamsters was imported into the US in 1971, but it is not known if any of todays North American pets descended from them.