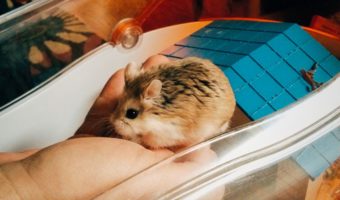 The Chinese Hamster is a species of hamster, scientific name Cricetulus griseus, which originate in the deserts of northern China and Mongolia. Chinese hamsters grow to between 7.5 and 9 centimetres in length and as adults can weight 50 – 75 grams. Chinese Hamsters live two to three years on average.

A Chinese hamsters body proportions, compared with those of other hamsters, appear ‘long and thin’ and they have (for a hamster) a relatively long tail. Chinese hamsters are not, technically, ‘dwarf’ hamsters since this term refers to animals in the genus Phodopus, (the two types of Russian Dwarf Hamsters and Roborovskii Dwarf Hamsters).

The wild color is greyish brown above with a black stripe down the spine and a whitish belly. This coloration, combined with their nimble build and longer tail, makes them look ‘mousy’ and in fact, they are members of the group called ratlike hamsters. Besides the wild color, a well-known variation is the white-spotted Chinese hamster, which often is greyish white all over, with only a dark stripe on its back.

Chinese hamsters have quiet temperaments and are easily handled. One of their endearing traits is that of clinging to a finger with all four paws, rather like a harvest mouse on a corn stalk. Chinese hamsters can be quite nervous as youngsters, however, once they are tame, display an endearing calmness and gentleness of character.

In common with other small rodents, Chinese hamsters have poor eye-sight, however, they have acute senses of smell and hearing.

In its natural habitat the Chinese Hamster lives in burrows which it excavates itself. Some burrows have a single entrance hole while others have two or even three entrances.

The complex burrows with multi-entrances are most likely to be the domain of experienced, mature animal and it is probably younger individuals that are responsible for the simpler burrows.

Within the larger burrows one finds the main living quarters and separate chambers for food storage and nesting. Although Chinese Hamsters are fiercely territorial, these burrows are often found very close to each other, giving the misleading impression of them living in colonies.

Chinese Hamsters possess enormous internal cheek pouches. Chinese Hamsters collect huge quantities of food in their pouches, to transfer to their burrows to consume in relative safety. Chinese Hamsters are excellent climbers, using their slightly prehensile tail as an aid, although in most conventional cages they have little scope to demonstrate their arboreal skills.

Chinese Hamsters in the Wild

In the wild, Chinese Hamsters do not hibernate continuously but awaken from time to time to eat stored food. As the weather becomes colder, Chinese Hamsters enter into deep-sleep and the intervals between spells of waking become longer.

In captivity, as long as the cage is kept in a warm room, there is no reason why your hamster(s) should attempt to hibernate. If the room temperature drops too low, it may fall into a torpor-like state and may even appear to be dead. On no account should you allow this to happen.