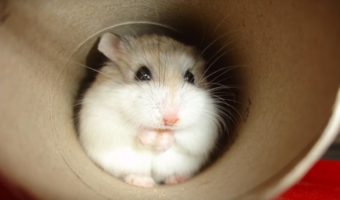 Roborovski Hamsters (Phodopus roborovski) are the smallest and fastest of all hamsters and are commonly kept as pets. The distinguishing characteristics of the Roborovski Hamsters are the white spots where their eyebrows would be. These hamsters live the longest of any pet hamsters, on average three to three and a half years of age.

Roborovski hamsters do not like to be held or cuddled and do not form trusting relationships with humans easily. As they grow to be roughly the size of an adults thumb, they can easily squeeze through the bars of a standard hamster cage and so careful consideration needs to be given to housing. Roborovski hamsters are best for people who prefer to observe rather than to play with their pet.

Because of their size and features, Roborovski hamsters can be comical pets when observed in social groups. If kept together in mixed sex pairs or groups Roborovski Hamsters usually start to breed in the spring following the year in which the female was born.

Female Roborovski hamsters often become sterile at around 24 months of age, however, males usually remain fertile for most of their life.

Roborovski hamsters gestate for around 23 – 30 days. When the young are born they resemble pink beans. At around 5 – 6 days the skin may start to pigment and at 6 – 8 days hair begins to emerge. By 10 – 12 days the babies are covered in short fur and the eyelids are beginning to mature. At this time the babies may also start wandering around the cage, even though still blind.

The female will usually collect the wandering babies and return them to the nest – this may be accompanied by squealing from the babies but is not usually anything to worry about. At 14 – 16 days of age the eyes open and the babies are fully covered in fur.