Honeybees are amazing animals that do a lot for our environment, including helping plants grow, breed and produce food. Not to mention, they give us tasty honey, too.

Swarming is a natural process that often happens in a bee’s life, but there’s a lot to learn about the activity. You might think the first thing to do when seeing a bee swarm is panic, but in reality a swarm of bees has a job to do and is very important to the species.

So, if you’re interested in learning more about bee swarms, why they happen, what they looks like, and why they are important, keep reading on to find out more. 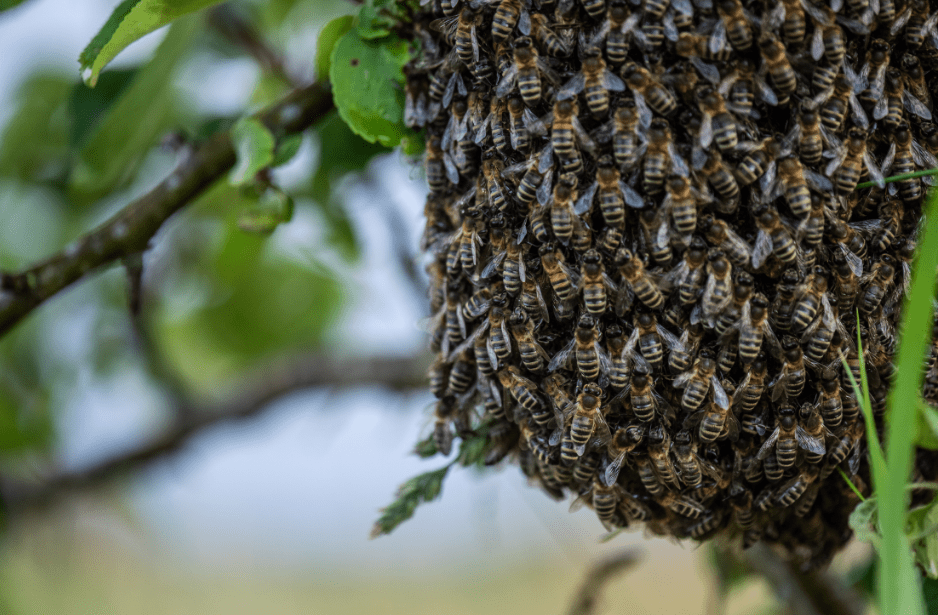 What Is A Bee Swarm?

Bee swarms occur when a hive becomes overcrowded or overpopulated, and some of the bees leave the hive with the old queen, while a new queen takes over. Because they have left their hive, they stay in a swarm while they scout for their new home. Bee swarming is a natural means of reproduction, but it can look pretty intimidating!

A primary bee swarm is the most common form of bee swarm and is the first bee swarm to leave the hive. It is usually made up of around 50% of the size of the parent colony, which is normally around 25,000 bees. It also contains the queen bee.

You may be wondering why bees swarm in the first place. There are a few different reasons for this happening. The first reason is because of overcrowding and congestion in a hive. If there are too many bees, then the queen bee can’t get her pheromone to all of her colony quite as well, which means the worker bees start to prepare for a new queen.

The same thing happens when there is an aging queen; as a queen bee gets older, she won’t be able to reproduce quite as well and her fertility starts to fail. This indicates to the worker bees that it is time for a new queen to keep the hive going.

A change of season can also cause bee swarming, which is why swarming usually happens in the spring after the cold winter. It can also be that, as more pollen comes in, the nest of bees grows rapidly and worker bees that are usually making honey are idle, causing overcrowding.

Bees swarm in late spring in search of a new home. During the winter the queen has been laying her eggs and the colony prepares to rear their young. As the weather becomes warmer and the early flowers appear, the raising of young bees increases rapidly. By the end of spring the colony becomes overcrowded. When a hive becomes too large, the bees create new queens and swarm. A large number of the bees, including the old queen, leave the hive and the swarm then sets off in search of a new home and to establish a new colony.

The bees will rest during swarming, usually in a tree or bunched together, draping from a bush, the bees are at their mildest at this point of the swarm. They will all wait with the queen while the scouts go hunting for a suitable new home. Sometimes the swarm will make their new home out in the open, but typically they will find a more protected and suitable hive site.

In the old colony that the swarm leave behind, a new queen emerges and takes over the roll of the old vacated queen and she will experience the same swarming instincts the following year. And so the cycle of activity goes on.

Bee swarms sometimes frighten people, though they are usually not aggressive at this stage of their life cycle. This is principally due to the fact the swarming bees have no hive to defend and are more interested in finding a new nesting point for their queen. This does not mean that bee swarms will not attack if they perceive a threat. Most swarms will move on and find a suitable nesting location in a day or two.

A swarm that does not quickly find a home and more nectar stores will starve. This happens most often with early swarms that are cast on a warm day that is followed by cold or rainy weather in spring. The remnant colony after having cast one or more swarms is usually well provisioned with food, but the new queen can be lost or eaten by predators during her mating flight, or poor weather can prevent her mating flight. In this case the hive has no further young brood to raise additional queens, and it will not survive.

Bee swarming is very common and therefore happens wherever bees are and live. Bees live all over the world (on every continent except Antartica!), so there is not one particular location in which you will find a bee swarm.

When bees swarm, they go on the hunt for a new home and, until they find that home, they can swarm in many different places. These include in tree branches or in public trash cans. Bee swarms are often found less than 100 metres away from a beehive. Usually, they stay in this location from a few minutes to a few days before they find a more permanent place.

There are a few characteristics that bees look for when looking for a spot for their new hive. The place must be big enough to accommodate their swarm and should be well protected from the elements. It should also have a small entrance located at the bottom of the cavity.

The location should also get adequate sun for warmth and should not be infested with ants.

If you have a bee swarm in or around your home, you can get it removed. You should never approach the bees yourself or spray them with anything, as this can aggravate them. Get a professional to deal with a bee swarm. 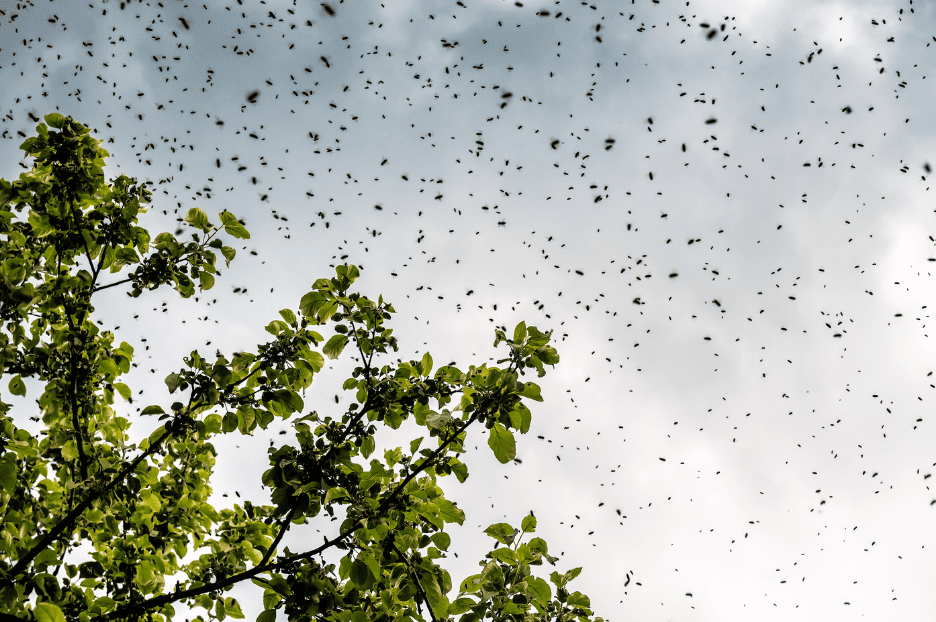 A bee swarm can vary in size, anywhere from thousands to tens of thousands of bees. Swarming can occur at any time from March to September, but swarming season usually occurs during the first periods of really warm weather in late April through to June, so spring to early summer. Each time a swarm is created, it usually consists of approximately 50% of the bee colony.

Bee swarms typically consists of one queen bee, less than 50 drones (male bees) and thousands of worker bees. A swarm weight can vary, but it is said that there are about 10,000 bees to the kilo. Despite this, the swarm is usually heavier because it also contains honey from the bees before swarming. A swarm cluster can be as small as an orange or as large as a beach ball.

Swarming is a vulnerable time for a bee, because the bees only carry the nectar or honey they have in their stomachs and this is all they have to survive. Therefore, if they don’t find a new place to build a hive quickly, they could die.

Worker bees create queen cups throughout the year and, when a hive is getting ready to swarm, the queen lays eggs into the queen cups. New queens are raised and the hive may swarm as soon as the queen cells are capped.

A beehive can swarm more than once, and sometimes more than twice, sometimes in a matter of days depending on their food supply, the season and the availability of the queen.

After you have a bee swarm removed, you might still see a few bees flying around. These are usually scout bees. After a swarm is removed, they come back and find that the swarm has gone, and usually return back to their original hive a few days later.

A bee swarm is very important because it helps with the reproduction of a honeybee colony. It is also essential to the bees’ survival. If the hive becomes overcrowded, resources will be scarce and the colony’s health will begin to decline.

While a bee swarm is important for regeneration of bees, a swarm actually creates an interruption in the brood cycle of the original colony. This is because a laying queen is too heavy to fly long distances, so the worker bees will stop feeding her before the anticipated swarm date and the queen stops laying eggs. 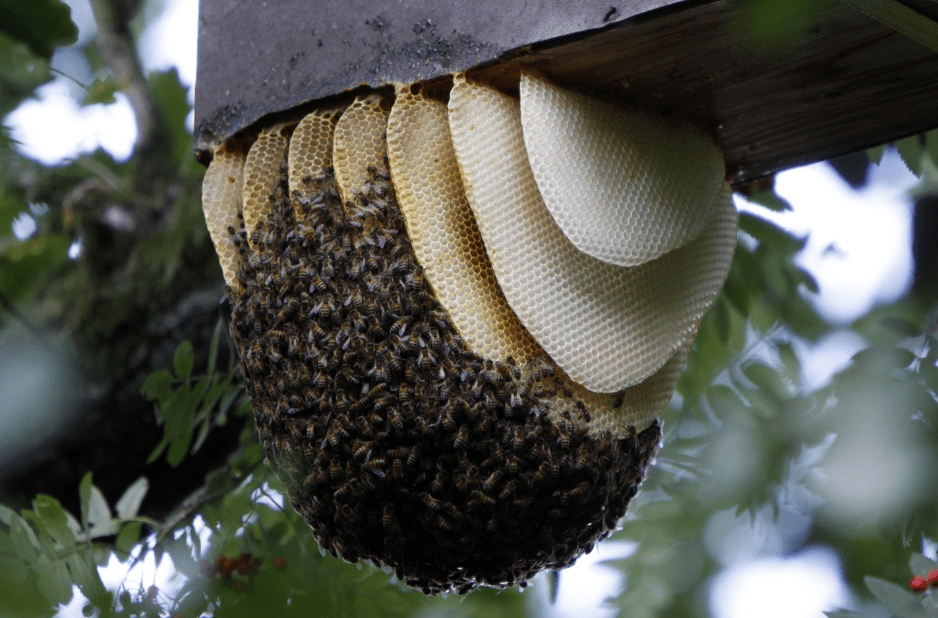 How do I identify a bee swarm?

Bee swarms are pretty easy to identify. They are a large cluster of bees and may have settled in a tree or a bush. They often look like a big ball of bees, and you shouldn’t be able to see a hive or any honeycomb. They reason they look like a clump is because they are all gathered around the queen bee.

What should I do if I see a bee swarm?

The best thing to do if you see a bee swarm is not panic! Bees are actually very calm when swarming, and will not hurt you if they are not provoked. You shouldn’t touch them, try to move them or spray anything on them. This could cause them to sting you. Leave bee swarms alone and call a professional to deal with them.

How do I safely get rid of a bee swarm?

You should never try to get rid of bee swarms yourself. Call a professional in to deal with it. You should call a beekeeper, who will remove the bees and rehome them in a beehive. If you call an exterminator then they might exterminate the bees, and bees are very important to our environment, so this is not advised.

It is important to act quickly if you see a bee swarm, before the bees choose a new home and start producing honeycomb. Once they find a place to live and make honeycomb, they will defend their colony and moving them will be a bigger challenge.

Having a swarm of honey bees removed shouldn’t cost you very much, if anything at all, especially if you book a local beekeeper. Having an exterminator come in and remove them may cost you a bit more.

How long do bee swarms last?

A bee swarm will usually stay in one location anywhere from a few hours to a few weeks before moving to their permanent location. Bees usually try to find a nest site pretty quickly, so you should act quickly if you see a swarm.

Bee swarms are not dangerous. Because bees that are swarming have left their hive, they don’t have offspring or food to protect. This means they are actually at their most docile and are quite relaxed. If you don’t provoke them, they won’t harm you at all.

What is the difference between a bee swarm and a bee nest?

A bee swarm doesn’t fly with honeycomb, larvae or eggs, so if you see any of these, you will know it is not a bees swarm, but a nest. Bees in a swarm fly with only the nectar in their stomachs to make for an easy journey before they set up their home in a nest somewhere.