Dolphins in the Galapagos Islands

Five species of Dolphin can be found in the Galapagos waters. The Bottle Nosed Dolphin and the Common Dolphin live in these waters. Other species pass through en route when migrating.

Whales, dolphins and porpoises all have a blubbery layer of fat around their body. This blubber allows them to stay warm in cold waters such as the Galapagos waters and gives them extra energy during long migrations.

Take a look at these amazing, intelligent mammals that live and pass through the cold waters of the Galapagos Islands: 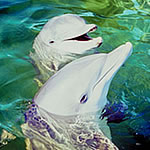 The Bottle Nosed Dolphin (Tursiops truncatus) is the most common and well-known dolphin. Bottled Nosed Dolphins can be seen riding the bow wave in front of boats.

The Bottle nosed Dolphin is grey, varying from dark grey at the top near the dorsal fin to very light grey and almost white at the underside.

The Bottlenose dolphin in the Galapagos cooler pelagic waters tend to be larger than their cousins who inhabit warmer, shallower waters. Those in colder waters have a fattier composition more suited to deep-diving.

The lifespan of the female Bottlenose Dolphin is about 40 years, whereas males rarely live more than 30 years.

You can read more about the Bottle Nosed Dolphin in the Marine section.

Common Dolphins measure up to 2.4 metres in length and weigh around 110 kilograms. Common Dolphins have a distinctive yellowish hourglass pattern on their sides which makes them easy to identify. Their back and upper flanks are brownish or black and the chest and belly are creamy-white in color. There is a tan/yellow patch on the sides. Flukes, flippers and dorsal fin are dark and the beak is long and slim. There are black stripes from the flipper to middle of the lower jaw and from the eye to the base of the beak. Common dolphin males are slightly larger than the females.

Common dolphins face a mixture of threats due to human influence. Populations have been hunted off the coast of Peru for use as food and shark bait. In most other areas the dolphins have not been hunted directly. Several thousand individuals have been caught in industrial trawler nets throughout their range. Common dolphins were abundant in the western Mediterranean Sea until the 1960s but occurrences there have tailed off rapidly.

You can read more about the Common Dolphin in the Marine section. 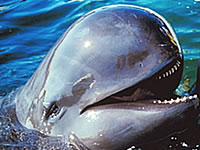 The Risso’s Dolphin (Grampus griseus) is the only species of dolphin in the genus Grampus. Risso’s dolphins can be easily identified by their scarred skin. This is caused by other Risso’s dolphins who use their front teeth when playing and fighting. Risso’s dolphins measure around 2.5 – 4 metres in length and weigh between 300 – 500 kilograms. Males are typically larger than females.

Risso’s dolphins are light grey in color and have no beak. They have a stocky head and white coloring under their chin. Their dorsal fin is like that of a shark.

Risso’s dolphins can be seen around the Galapagos islands, however, they inhabit all seas, particularly temperate waters. Risso’s dolphins feed on squid and fish. They live in schools of 3 – 50 individuals and are often in the company of other cetaceans (dolphins and whales).

Global threats include hunting, human disturbance, habitat loss, prey depletion, pollution and entanglement in nets although they are classified as Data Deficient by the 2000 IUCN Red List.

You can read more about the Risso’s Dolphin in the Marine section. 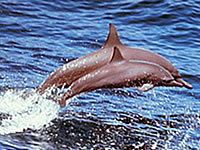 The Spinner Dolphin (Stenella longirostris) is a small dolphin found in off-shore tropical waters around the world. The colder waters of Fernandina Island and Isabela Island are superb for dolphin and whale watching and Spinner Dolphins can regularly be observed. The Spinner Dolphin is famous for its acrobatic displays in which they will spin longitudinally along their axis as they leap through the air.

The Spinner Dolphin is a slender creature with a long, thin beak to which the distinct forehead slopes gently. Their flippers are long and pointed and it has a dark grey or black dorsal cape, paler flanks and sides and a creamy-white belly.

Spinner Dolphins measure between 1.3 and 2.1 metres in length and weigh between 45 – 75 kilograms. The Spinner Dolphin occupies both offshore and inshore waters.

The total population of Spinner Dolphins is unknown but it is certainly dramatically reduced by fishing activity in the eastern Pacific and regarded as endangered.

You can read more about the Spinner Dolphin in the Marine section.

The Pantropical Spotted Dolphin (Stenella attenuata) can be found in all the worlds oceans and can regularly be observed in the Galapagos waters. The Pantropical Spotted Dolphin varies significantly in size and coloration throughout its range. The ones that inhabit the cooler, pelagic waters of the Galapagos are larger and more spotted than their warmer water relatives.

The Pantropical Spotted Dolphin has a long thin beak. The upper and lower jaws are darkly colored but are separated by what appear to be ‘thin white lips’. The chin, throat and belly are white to pale grey with a small amount of spots. The flanks are separated into three distinct bands of color — the lightest at the bottom, followed by a thin grey strip in the middle of the flank and a dark grey back.

The Pantropical Spotted Dolphin was beginning to come under threat due to the killing of millions of individuals in tuna purse seines (a large fishing net that hangs vertically in the water by attaching weights along the bottom edge and floats along the top). The 1980s saw the rise of ‘dolphin-friendly tuna’ in order to save millions of the species in the eastern Pacific Ocean.

You can read more about the Spotted Dolphin in the Marine section.