Galapagos flora is as amazing as its fauna. Some of the plant life is just as endemic as some of the animals that inhabit the islands. Many of the plants came on journeys from the mainland and have had to adapt and flourish with little insect life to pollinate and disperse seeds which would normally occur in a similar environment. Over time, the plant life has differentiated itself from its relatives resulting in one third of the 560 native plant species being endemic, meaning they are found nowhere else on earth.

The islands flora each have specific zones. The Mangrove swamps are found in the coastal wet zone whereas the Prickly Pear Cactus is only found in arid lowlands. Different species of tree, such as the Scalesia atractyloides (the endemic ‘daisy tree’ found only on Santiago island) and the Miconia are found growing in the higher humid zones. Together with lichens, mosses and liverworts, Galapagos has a very complex ecosystem.

Many of the plants found on Galapagos are rare and endangered, however, there are some fascinating relationships between the plants and animals on the islands. The giant tortoises and land iguanas, for example, feed on Opuntia, the prickly pear cactus and have influenced its growth form on different islands. 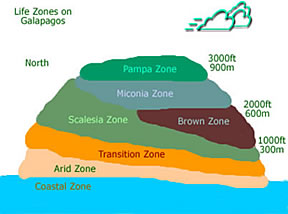 In total there are seven zones within the archipelago housing many different plant life. Various plants and animals have adapted over the years to the conditions of the islands and in some cases the condition of the zone. Flora is normally found in a specific zone and the fauna dependent on those plants can be found in the same zone.

Migration occurs between zones for some birds and animals depending on conditions. 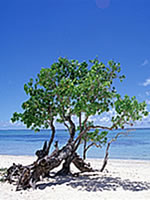 This is the most lowest life zone on the island. Plants that exist on the coastal zone can be divided into two sections; the Wet Coastal Zone or Mangrove Zone and the Dry Coastal Zone or Beaches and High Tide Areas. Mangroves inhabit the Wet Coastal Zone. The trees and shrubs have adapted to tolerate the salty sea water. They flourish in shallow and muddy saltwater or brackish waters. In the Galapagos there are 4 varieties of Mangroves including the Black Mangrove, White Mangrove, Red Mangrove and Button Mangrove.

The Dry Coastal Zone is made up of the dry sandy area from the sea to the high water line. This area supports low lying spreading plants which are able to retain water including the ‘Sesuvian Portulacastrum’ a herb whose stem turns a bright reddish color during the dry season. 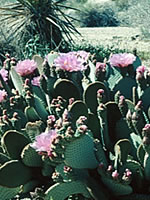 This zone slopes down to the coastal zone and is a desert-like area. Many cacti such as the Prickly Pear Cactus and the Candelabra Cactus live here along with the Lava Cactus and various vine plants. Endemic plants are also at home here like the Lava Morning Glory and the Passionflower. Charles Darwin was the first to note that the Prickly Pear Cactus have thigmotactic anthers. This means that as its anthers are touched they curl over, depositing their pollen.

This movement can be seen by gently poking the anthers of an open Opuntia flower. At the top of the Arid Lowlands the silvery leafed Palo Santo Tree with its collection of lichens can be observed.

There is more plant life as this zone is reached. Plants from both the Arid Lowlands and the Upper Moist Zones occur. There is a variety of small trees and shrubs including the endemic Pega Pega Tree and the endemic Guaybillo which produces a small white flower that develops into a fruit.

The Galapagos Tomato, endemic to the islands is a salt resistant tomato that has been used to create a hybrid, which is capable of growing in salty soil around the world. 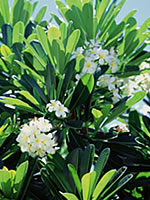 This is the lowest of the humid zones. It is named after the daisy tree that grows there. The Scalesia is one of the few trees in the Aster Family and can grow to heights 16-50 feet (5-15 metres). Its trunk and branches are covered with moss and lichens. The environment in this zone can possibly be compared to a Rainforest atmosphere. Since humans arrived on the islands, the Scalesia Trees have greatly reduced in numbers. They introduced goats and pigs, which eat the young plants and feed on older plants.

The Guava was also introduced, a plant whose dense growth patterns deprives the Scalesia trees of nutrients and eventually makes it difficult for it to survive.

Above the Scalesia Zone at 1950 – 2300 feet (600-700 metres) is the humid zone named for the Miconia shrub that once dominated this region. The Miconia Robinsoniana grows to heights of 10-13 feet (3-4 metres). It is easily identified by its leaves that are yellow with edges of reddish/brown colors.

The Miconia is an endemic shrub that has become endangered since the arrival of man. It has become the most endangered plant in the islands. Introduced cattle have grazed the Miconia into dangerously low levels.

The highest part of the islands is the Pampa zone. It reaches over 3000 feet (900 metres) and is the highest vegetation zone in the Galapagos islands. The appearance of this zone depends on the amount of moisture it receives. This region contains no true trees or shrubs. The tall Galapagos Tree Fern and Liverworts are commonly found in this zone.