What is an Invertebrate?

An Invertebrate is an animal that has no backbone (spine) for support. 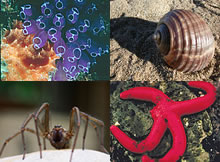 Invertebrates are scientifically arranged into around 30 separate phyla ranging from simple organisms such as Sponges, Roundworms and Flatworms to more complex creatures such as Arthropods and Molluscs. Invertebrates are cold blooded animals that rely on their surroundings to maintain their body heat. Some are parasitic and either live on other animals bodies such as Ticks and Leeches or internal parasites such as Tapeworms and Flukes.

Body symmetry is one of the main differences between groups of invertebrates. Some groups such as the Cnidarians (a phylum containing over 9000 species of animals found exclusively in aquatic environments) have radial symmetrical bodies which are arranged in the same way that spokes are arranged on a wheel. Others have bilateral symmetrical bodies, such as some arthropods whereby their bodies are divided into 2 equal parts by a midline.

Reproduction in invertebrates differs depending on species. Asexual reproduction (having no sex or sexual organs) is quite common, however, sexual reproduction is more typical. Hermaphrodites are common in invertebrates, this means that both male and female sexual organs are present in one individual. In single sex species, where only one sexual organ is present, males and females do not have to make contact to reproduce as fertilization can occur externally. Following reproduction, most invertebrates change shape and appearance by going through a process called metamorphosis whereby adults and young have different lifestyles including how and what they feed upon.

Invertebrate senses can range from simple systems to more complex organs. Many invertebrates can sense dissolved or airborne chemicals, changes in pressure, gravity and portions of the electromagnetic spectrum including infrared and ultraviolet radiation.

Sponges are the simplest form of living animal. These aquatic invertebrates lack true tissues and organs and live attached to a solid surface such as a rock. They feed by filtering nutrients from the water using special cells and a system of canals and pores. The soft parts of their body are supported by a skeleton of spicules (silvers of carbon carbonate or silica).

They provide structural support and deter predators. Large spicules, visible to the naked eye are referred to as megascleres, while smaller, microscopic ones are termed microscleres. Sponges do not have nervous, digestive or circulatory systems. Instead most rely on maintaining a constant water flow through their bodies to obtain food and oxygen and to remove waste. Sponges are known for regenerating from fragments that are broken off, although this only works if the fragments include the right types of cells. A few species reproduce by budding (a prominence that develops into a new individual, sometimes permanently attached to the parent and sometimes becoming detached).

Flatworms are simple worms that are bilaterally symmetrical in shape. They have distinct heads and a flat, elongated, unsegmented body. Flatworms have no respiratory or circulatory system which restricts them to flattened shapes that allow oxygen and nutrients to pass through their bodies by diffusion (a net transport of molecules from a region of higher concentration to one of lower concentration by random molecular motion).

Over half of all known Flatworm species are parasitic such as Tapeworms and some do enormous harm to humans and their livestock. Some are predators in freshwater and marine habitats. Others rely on symbiotic algae. Cestodes (tapeworms) and trematodes (flukes) have complex life-cycles, with mature stages that live as parasites in the digestive systems of fish or land vertebrates.

Members of this group of aquatic animals have radial symmetrical bodies that are essentially tubes open at one end. Some are flattened into a bell shape such as the Medusa and some are elongated with the closed end attached to a hard surface such as a Polyp. All cnidarians have tentacles which are located around their mouths and contain stinging cells. These stinging cells are used for defence and for capturing prey.

Most cnidarians prey on organisms ranging in size from plankton to animals several times larger than themselves, however, many obtain much of their nutrition from endosymbiotic algae and a few are parasites. Cnidarians have no respiratory organs, and both cell layers absorb oxygen from and expel carbon dioxide into the surrounding water. When the water in the digestive cavity becomes stale it must be replaced and nutrients that have not been absorbed will be expelled with it. While corals are restricted to warm, shallow marine waters, other cnidarians live in the depths, in polar seas and in freshwater. Most cnidarians reproduce by budding. In some species, the new creatures remain joined to their parent to form colonies as in some species of Jellyfish and Hydrozoans such as the Portuguese Man of War (Physalia physalis).

There are around 93,000 recognized extant species of mollusca, making it the largest marine phylum with around 23% of all named marine organisms. It has been estimated that there are about 200,000 living species in total and 70,000 extinct species. Molluscs have the widest range of body forms out of all invertebrates. Molluscs usually consist of a head, a soft body mass and a muscular foot. The muscular foot is used for locomotion.

In some of the more advanced species of molluscs such as the cephalopods which includes the Octopus, Squid and Cuttlefish, their heads are more well developed, they have sophisticated senses and parts of their head and foot are modified to form prey-capturing arms or tentacles. All molluscs have one or all of the following features: a bony, toothed ribbon called the radula, used for rasping food, a calcium carbonate shell (made from proteins and chitin) or other structure covering the upper surface of the body and a mantle which is an outer fold of skin covering the mantle cavity. The mantle is used for breathing and excretion. Most molluscs have eyes and all have sensors that detect chemicals, vibrations and touch. All molluscs produce eggs, from which may emerge trochophore larvae, more complex veliger larvae or miniature adults. A striking feature of molluscs is the use of the same organ for multiple functions. For example, the heart and nephridia (kidneys) are important parts of the reproductive system as well as the circulatory and excretory systems. In bivalves, the gills both breathe and produce a water current in the mantle cavity which is important for excretion and reproduction. Molluscs are adapted to life on land and in fresh or sea water.

Arthropods are a group of invertebrates that form the largest Phyla of all our planets living organisms. Arthropods account for 3 out 4 species of animal known to man. The biomass of arthropods far outweighs that of the vertebrate group of animals. Arthropods have several features in common. The main common feature is that they all have bilaterally symmetrical body shapes which are divided into segments.

Over time, evolution has fused the segments into functional groups. There are 4 main groups of arthropods: